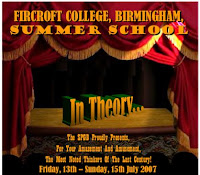 Socialist Party of Great Britain member, Brian Gardner, reflects on the SPGB's 2007 Summer School that took place this past weekend in Birmingham.

This weekend some 40-plus members, sympathisers and Standard-subscribers from as far afield as Italy, Turkey and USA gathered for a weekend of discussion and debate at the annual summer school organised by Birmingham Branch.

Under the theme “Thinkers of the 20th Century” a range of ideas – from disciplines as diverse as anthropology, information technology, literature and philosophy - were reviewed from a socialist perspective and much heated debate followed.

It's not surprising that a recurring issue throughout such a themed weekend is that of “freedom”. Much abused in everyday currency, “freedom” often translates as little more than lower taxes and fewer regulations, issues of little or no concern to world socialists. In contrast, socialists are intensely interested in freedom, whether its the freedom we have to surpass the gene as a constraint on how we live, the freedom to work co-operatively in software development/use software without restrictions, or the more abstract freedom of the individual under the state.

The dystopian visions of Aldous Huxley (Brave New World) and George Orwell (1984) then, formed a large part of the discussions around the first two talks from Richard Headicar and Mike Foster respectively. What sort of state do we live in now? Which dismal projection has survived the best? Probably a bit of both is the answer: Orwell's boot stamping on the face is still prevalent in many parts of the world as the market system emerges to an ungrateful population of new wage-earners. “Late” capitalist states on the other hand have clearly evolved more complex and subtle forms of oppression, including of course the diversions of Big Brother (the TV “reality” show) and the dubious freedom of consumer choice.

To what extent can you separate the thinker from the thoughts? While Orwell got his hands dirty down mines, in hotel kitchens and most famously on the frontline in Spain, Aldous Huxley in common with most of the other thinkers risked little more than a paper cut in the drawing rooms of Bloomsbury. Does this influence how we read each author?

As Marx famously noted, “the philosophers have only interpreted the world the point is to change it”. Someone who has done very little interpretation of the world, but by contrast has undeniably changed it is Richard Stallman. A software engineer turned intellectual property activist, Stallman developed GNU software, CopyLeft and the free software movement. This has inverted contract law to ensure that CopyLeft software (such as Linux operating system) gets the fullest expression of its use value (ie it is free to copy and use), but has effectively no exchange value as users have to agree to make available and not restrict access to any amendments made to it. Tristan Miller discussed how this little oasis of “socialistic” production has grown unstoppably within the body of capitalism and effectively mirrors – albeit within the software and digital music communities – all the features of “from each according to ability, to each according to need”.

The subject of freedom of the individual phenotype (eg human) as opposed to the dubious constraints of biological determinism arose during Adam Buick's introduction to the cultural anthropologist Ashley Montagu, who is best known for his contributions during the middle part of last century to the nature v nurture debate. It is likely that his writings will stand the test of time better than the more recent fashions of biological determinism - sociobiology and evolutionary psychology - as typified by the “popular" science writers Richard Dawkins, E O Wilson and Steven Pinker. If human nature is slowly becoming less of an ideological “barrier to socialism” than it once was, it will be due to the painstaking work of real scientists such as Montagu.

Simon Wigley got the short straw in having to present the ideas of the Frankfurt School of philosophy shortly after a large Saturday lunch. He stuck to the brief given to him admirably however, particularly given that he had little enthusiasm for these ideas, as he made clear. Whilst some in the audience wanted to shoot the piano player, others were grateful that Simon had done the hard work of reading this stuff and translating it from the English for our benefit.

Personally speaking I gained most from this talk – even if it was only to gain confidence that the Frankfurt emperors were indeed just as stark naked as I had always suspected, and that rather than being extensions to marxist philosophy, the ideas of Adorno, Habermas et al (along with the post-modern ideas they set the scene for) are negations of class-based analysis, of the enlightenment, and even of the scientific method that drove it.

The material conditions of capitalism really haven't changed that much in the last century – and our philosophies really dont look like they need to change much either. Anyone who thinks that world socialists are intellectuals, academics or armchair philosophers would have been pleasantly surprised at the disdain with which these ideas – far removed from anything actually to do with working class experience – were discussed. Habermas could have dug coal during the Spanish Civil War for all I know, but – judged on their own merit - his ideas still should not be taken seriously.

In summary, there is of course a perpetual tension between theory and practice that no political organisation, whether liberal, marxist or anarchist, gets right all the time. However, assisted by a plentiful supply (according to need of course) of the local Black Country beer, and the opportunity to catch up with old comrades and new sympathisers, most attendees I spoke with left the weekend feeling stimulated, reinvigorated and better-prepared for the more practical need to spread the socialist case. Surely, the ideal balance between ideas and action.