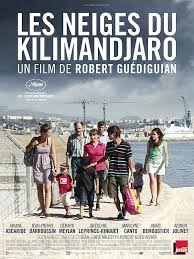 
The film opens in the shipyard, and the struggle between capital and labour sees the union 'choosing' by lot those who will be made redundant. Later Christophe, one of those made redundant, insinuates to Michel there have been many union compromises with management and ‘back handers’. For decades the CGT was allied with the Communist Party, and the ossified 'Stalinist' reformism of both undermined the events of 1968. The CGT was more recently involved in strike action in 2005 over the privatisation of the Marseilles maritime ferry service.
Michel mentions the 1972 “Common Programme” which was optimistically seen as the 'union of the left', forming the basis for the Mitterrand Presidential victory in 1981, and reforms to capitalism such as Keynesian economic measures. Michel has achieved a 'good' standard of living due to the benefits of 'reformism'. He speaks highly to Christophe of the fruits of 'reformism', and in one scene Michel and his wife discuss that they are now “petty bourgeois”. During capitalism's periodic crises, the workers’ wages decrease so that Christophe, the young worker who is made redundant with no severance payments, commits a robbery for purely economic need; the proceeds are used to buy food, pay the rent, and look after his younger brothers.
Michel's hero is the pre-WWI reformist social democrat politician Jean Jaurès whose picture is on his work locker and he refers to him several times in the film. Jaurès advocated 'popular front' alliances with the progressive middle class. When WWI threatened in 1914 he tried to implement the Second International anti-war policy but was assassinated. Mitterrand placed a red rose on Jaurès' tomb in 1981.
Jaurès's reformism was opposed by Jules Guesde's 'Marxist' party whose manifesto had been drawn up by Marx and Engels. In 1905 Guesde's party and Jaurès’s party united under pressure from the Second International and Guesde soon got bogged down in reformism. In 1914 he joined the French government of “National Unity” although in 1907 he had declared war was the “result of the capitalist regime”. Had he not been assassinated no doubt Jaurès would have too.
Michel is imbued with an 'Idealist, reformist, social democratic' philosophy and the sense of 'justice' shared by Jaurès. Marxists see 'justice' as a concept originating in class society but Jaurès believed that the Idea of 'justice' causes the movement of history. Paul Lafargue critiqued Jaurès and 'justice' in his 1895 lecture Idealism and Materialism in the Conception of History: “Man never would have emerged from the primitive communist environment in which the idea of Justice does not exist”. Michel believes his conduct is guided by 'justice' but Lafargue sees that “the idea of Justice will vanish like a bad dream when common property shall have taken the place of private property”.
Steve Clayton
Posted by Imposs1904 at 11:19 AM No comments:

From the October 1943 issue of The Western Socialist

[The following are extracts from a personal letter from the organizer, Glasgow Branch, Socialist Party of Great Britain, describing a street meeting recently held at Glasgow.]

Picture one thousand people at the corner of Blythswood and Sauchiehall Streets. There was a large sprinkling of American soldiers and N. C. O's. Two looked like generals . . . they looked as if they were going to shout "Fall in," at any minute. They were amazed at the crowd and their troops (they came when the meeting was well on). In a few minutes they, too, were just members of the audience  . . .

Now to some of the questions after Tony (Comrade Tony Turner) had exposed the war, he pleted into American capitalism and, of course, all capitalists.

Turner knew the Americans were going to have a go and that's what he was angling for.

An American officer asked this question: "I agree with what you say but is it not possible that you may sell yourself to a Government and smother your ideas."

"Do you wish a supplementary question?" says Tony.

"Yes. Have you ever been in America?"

Tony repeats the question and says, "The answer is a brief one — NO! Now what is the implication?"

"Well. I don't think that you are entitled to claim a superior knowledge of America when you've never been there."

Tricky Tony hesitated for about one minute (long time at a meeting), pretending to be lost. All of a sudden he pointed to the officer and said, "Brother, I take a long shot. I know more about America than you do, and you have just come from there. To test this I will begin by an examination of the Constitution, important events in American history, the domestic scene, statistics relating to wealth production and distribution, etc. etc." Tony did all this and more. The officer remained silent for the rest of the meeting.

He handled drunks in a masterly fashion. One of the beer-sodden hooligan type got the spanking of his life. Tony pointed to him and said, "Look at the poor little fellow — his wee belly full of beer and he wants to fight. Should you see him tomorrow morning, he will make a mad gallop to the factory and start saluting, saying, "Yes sir! Yes sir! Three bags full." And Tony kept saluting as he was saying this.

He tanned the Scottish Nationalists, the Labour Party, the Independent Labour Party and the Communist Party.

Three husky CPers were crushed like mice before his devastating attack and exposure. How the people laughed when he said, regarding the present friendship of Stalin and Winston, "Churchill's song today is: 'You made me love you and I didn't want to do it, Joe'."

Literature sales were £4-13 — a record; collection £3. Turner was publicly thanked by members of the audience for his brilliant address. Tony got a smashing write-up in the (Glasgow) Evening Times by a special correspondent . . . I will try to get you a copy and send it on.
Angus McPhail
Posted by Imposs1904 at 5:13 AM No comments: 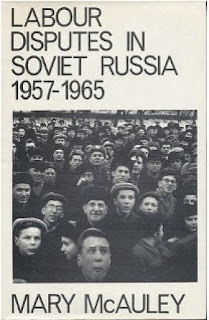 Book Review from the July 1969 issue of the Socialist Standard

Like most books based on doctoral theses Labour Disputes in Soviet Russia makes for rather dry reading. The masses of tedious details can be exasperating, but at the same time they do throw some light on the class struggle in Russia and the forms it assumes.

Mary McAuley spent eighteen months at the Labour Law Department of Leningrad University and this allowed her to study closely labour relations at a number of factories in the area. Particularly interesting are her accounts of some of the indignities which individual Russian workers, like workers throughout the world, find themselves subjected to. At the Karl Marx factory, for example, the shop superintendent cuts a worker's premium by 5 per cent for going to wash before time, and at a different plant the same penalty is imposed on another because — having been given a day's warning — she fails to report for work on a Sunday.

More amusing are the antics of various commentators who dismiss labour disputes in the Soviet Union as simply the result of such factors as "remnants of capitalist consciousness in individuals". The very frequency with which they repeat these empty formulae hints at the scale of the struggles to improve their wages and working conditions which workers throughout Russia must be engaged in.
John Crump
Posted by Imposs1904 at 1:15 AM No comments: