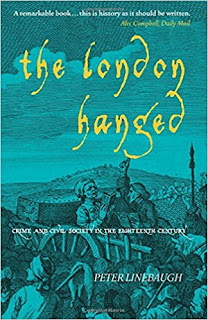 Book Review from the May 2007 issue of the Socialist Standard

The London Hanged: Crime and Civil Society in the Eighteenth Century by Peter Linebaugh (Verso Books)

This is a detailed history of the rise of capitalism in eighteenth-century London. During this period you really could be hanged for stealing a loaf of bread. But public hangings were not simply a punishment for a crime committed; they were a form of state terror used by the ruling class to force the poor of London to accept the criminalization of their customary rights and accept new forms of private property under the wages system.

In the resulting class war thousands of London poor met their fate on the gallows at Tyburn. Jack Sheppard and Dick Turpin were famous at this time as heroes of the London poor, as men who would "rob from the rich to give to the poor". Even today the exploits of the highway robber Dick Turpin are well-known in Britain. But Sheppard, thief and gaol-breaker, became notorious around the world. Over a century later the Australian press were making comparisons between Ned Kelly and Sheppard. In America, Frank and Jesse James wrote letters to newspapers signed "Jack Sheppard". Sheppard, Turpin and many others were eventually caught and hanged. However, their legacy remained a problem for the ruling class. For as Linebaugh writes, their exploits became "an essential part of the oppositional culture of working class London, a serious obstacle to the formation of a tractable, obedient labour force. Therefore, it was not enough to hang them - the values they espoused or represented had to be challenged".

But the working class fought back, culminating in the little-known Gordon Riots of June 1780. In this insurrection, Parliament and the Bank of England were attacked, the houses of judges and major employers destroyed. Newgate prison was attacked, its prisoners released and the building completely destroyed (this was only nine years before the storming of the Bastille in revolutionary France). Between 400 and 500 people were killed. Yet by the end of the eighteenth-century the social relations of wage labour and capital were predominant. To avoid confrontation, public hangings ceased but they continued within the relative safety (for the hangman!) of prison walls. There is however one remaining vestige of this violent period: the Punch and Judy show. Brought to London's Drury Lane in 1790 by the Italian puppeteer Giovanni Piccinni, the show expresses "the emotions of a class riven with unresolvable contradictions". In the murderous rage of Punch we see the frustrations of a class at war. Punch is arrested and sent to the gallows but refuses to comply. The hangman "puts his own head in the noose to teach Punch how to do it, and Punch hangs the hangman".

A magnificent and important book.