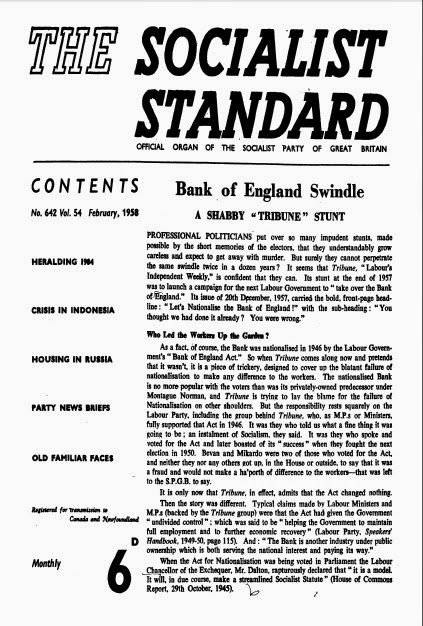 From the February 1958 issue of the Socialist Standard

They're at it again! Take hold of yourself. Who? The lotus-flowers. The teeny-weenies with long hair. Gaiety Girls. Seventhday Adventists? No, no. Worse. The tea-shoppe Jacobins. Good Lord! You don't mean —? Listen and I'll whisper. Well I never! Left-wing intellectuals. A magazine, eh? I bet they mention Colin Wilson and Kingsley Amis a lot of times. Lots of long words. Funny bits about Marx. Professor Deutscher. And you'll never guess who else. Not—not him? Professor Cole it is. Here, take it away. February's filldyke month, isn't it? Expensive way of filling dykes, at three-and-six a time.

Here it is, then: Universities and Left Review. Very well got up, good typography; indeed, the Abbey Press (the people who print it) are to be complimented on having a range of bold, large and display types almost sufficient to keep up with the editors' delight in Names. The cover bears the contributors' names (Isaac Deutscher, Claude Bourdet, Peter de Francia, E. P. Thompson, G. D. H. Cole, Joan Robinson, etc.) in massive black letters, their topics in small ones. The first page has the editor's names in large heavy type, underlined, across the top; there are the contributors' names in not-so-large heavy type, and the titles in type so small that myopic left-wing intellectuals presumably have to guess them.

Page three lists the names (in capitals) and achievements of the editors and contributors. Universities attended, articles accepted by the New Statesman; books published, masterpieces, intended, all four editors are writing theses on, respectively, The Novels of Henry James, Charles Dickens, the dockers of London, Bristol and Liverpool, and "the theory of alienation, from Hegel to the Existentialists." Even the Business Manager's name (in caps.), and a piece to show that he, too—"scholar of Magdalen College, Oxford," it says. Is it a Freudian urge that makes one want to write naughty additions to this portentous list? How about "Cigarettes by Nosegay-Rizla"? Ah, no—too non-U: Abdulla it must be. "Underwear by St. Michael" might do, though. Quick, turn over before the temptation takes us. But no, no! not more names, more capitals . . .

However, there are still the articles. After all, they have trumpets and spotlights and "My lords, ladies and gentlemen" before a prize-fight, but sooner or later the boxers, left alone, must come out fighting; and tonight there are reputed champions in the ring. Did we not pay three and sixpence to come in? Alas, the bigger they are the flatter they fall. The spryest of the lot, in fact, is Professor Cole, because he was wise enough to bring his own opponent: an old guy he cobbled together years ago ("tarted-up," of course, to quote one of Mr. Amis's most charming expressions) called "What Marx Really Meant," at which Professor Cole throws haymakers until his seconds lead him away, breathing heavily but unmarked.

The rest of them are unmarked, too, in a way. Hold them up to the light: not a stain—not a shadow, nor a trace, of an original idea or a thought which has not been raked out from the rag-bag of the nineteen-thirties. Not a stain, and shining pink. Here is E. P. Thompson, arguing whether it was right or not to have fought in Spain; the Art Critic writing-up artists who "represent a menace to the very foundations of the bourgeois idea of art"; the town-planners working-out nattier, more aseptic hutches for the working class. Here is the windy, outmoded vogue-language of left-wingers a generation ago: "significant," "chauvinist," "reactionary" and the rest.

Do they realize it, one wonders? Does any of them know that it's all past tense, that the Universities and Left Review is a dodo-house? Vol. I, No. 1. Spring 1957: but for this, one would be back with the Left News, the Federation of Progressive Societies and Individuals, or The Controversialist. Perhaps they don't realize it after all: one contributor actually writes of "a new social type in this country—the intellectual." Perhaps Claude Bourdet really thinks he has something new and unprecedented when he writes:

"The rehabilitation of the French left, then, depends upon a converging action of the Socialist Left still fighting in the Socialist Party, the democratic Communist opposition fighting inside the Communist Party, the left wing Mendesiste Radicals, along with the 'new left.' Under this four-fold influence the distant prospect is the reconstruction . . . of a strong united workers' Party, mingling Christian and traditional liberal influences with a dominant Marxist one."

"'Please tell the viewers, Professor, just what is happening in Russia now.'
"'Well, you see, Lenin is reputed to have said to Trotsky just before the Russian Revolution . . . '
"'Thank you, Professor. And what do you think will happen in Russia?'
"'Well, Stalin was a dictator, you know. And Trotsky said to Bogdanov . . . And, of course, there were Nichaev and Lenin's grandmother . . .'
Thank you very much, Professor. Have you a final prophecy to leave with us?'
"I think Trotsky may have been right. On the other hand, Lunacharsky may have been right. Who knows? Somebody must be right.'
"'Very grateful to you, Professor. Well, viewers, I'm sure we are all, etc.'."

There is an expectancy throughout it all that suddenly Mr. Spike Milligan's face will peer over somebody's shoulder, crooning adenoidally. It is, in fact, very much like the evening paper's football forecasts, where all results except the stone certs are predicted in such phrases as "Anything can happen." And when anything has happened, the expert remains, of course, an expert.

What purpose, then, does the Universities and Left Review serve? Pretentious, empty of ideas, its material picked from ideological dust-heaps, it has set out to make a splash—or, as the first editorial put it, to take a beachhead. Its avowed purpose is to publish discussion on "the common ground of a genuinely free and genuinely socialist society." Its way, the editors say, is "to take socialism at full stretch—as relevant only in so far as it is relevant to the full scale of man's activities."

If that were true—"the full scale of man's activities"—it really would be interesting. But, of course, it isn't. Search the Universities and Left Review, and only in a line here and a phrase there will you find the working class mentioned. Professor Cole has a good word for them, and there is a little lofty patronage from David Marquand ("in the thirties, there had to be an effective mass movement for the intellectuals to join") and E. P. Thompson ("the experience of rank-and-file political activity enriches us and keeps our ideas on the ground"). The names in the Universities and Left Review see themselves (bear witness, the articles on art, the cinema, architecture) as members of an élite: the General Staff on that beach-head the upper crust of the "genuinely socialist society."

This is the oldest, weariest idea of all. Its resurgence just now is probably more important to the "intellectuals" than ever before, however. The present-day world has very little use for them: a young man with a First in English Literature or a prize for philosophy is himself something of an archaism when the whole structure of education is being changed to produce physicists, technologists and other atom-age men. Unless the University men can succeed as writers or get into commercial television, their doom is schoolteaching or Government offices.

Some of them, aware of the situation, have responded angrily: the Angry Young Man is a useless young man whose abilities and ideals the world won't venerate any more. For others, there is another way to take: if the ruling class doesn't want them then the working class shall have them as its guides and philosophers, if not exactly friends. That in itself might not be so bad if the "intellectuals" were thereby realizing that they had an identity with the working class. Universities and Left Review shows nothing of the kind, however. The only affinity shown is in the advertisement for The Observer inside the cover, making the position sadly clear: U cries out to U.

Universities and Left Review seeks comment from the socialist viewpoint. It can be simply made. There is not a word concerning Socialism from beginning to end of the Universities and Left Review. Reformist claptrap, yes; pretentious verbiage, indeed; chatter about how things are for the intellectuals, above all. But of the interests of the working class, the great majority of mankind—not a whisper.

The most useful left-winger we ever saw was Tom Finney. The day he scored against the Arsenal—now, that was worth three-and-six.