From the November 2020 issue of the Socialist Standard

‘Before our white brothers came to civilize us we had no jails. Therefore we had no criminals. You can’t have criminals without a jail. We had no locks or keys, and so we had no thieves. If a man was so poor that he had no horse, tipi or blanket, someone gave him these things. We were too uncivilized to set much value on personal belongings. We wanted to have things only in order to give them away. We had no money, and therefore a man’s worth couldn’t be measured by it. We had no written law, no attorneys or politicians, therefore we couldn’t cheat. We really were in a bad way before the white men came, and I don’t know how we managed to get along without these basic things which, we are told, are absolutely necessary to make a civilized society.’
John Lame Deer, Lakota Sioux protester and satirist (1903 – 76)
Posted by Imposs1904 at 2:18 PM No comments:

Apologies for the long gap in posting on the blog. Two reasons:

1) The laptop's on its last legs, so scanning etc can be difficult.

2) Blogger decided to change its publishing gizmos and, quite frankly, it's fucking horrendous and it's all but hacked me off to the point where I'm thinking of putting the blog into cold storage. They really have made it ten times more laborious to post. I'll see it out till the end of 2020, and see how I feel about it in the New Year. 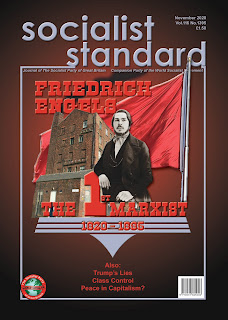 Editorial from the November 2020 issue of the Socialist Standard

As has long been predicted, the second wave of coronavirus is upon us. All along the government has claimed it has been following the science. On the face of it, this has appeared to be the case. In March, in common with most countries, the government instituted a national lockdown, where all non-essential businesses were closed and the state paid up to 80 percent of the wages of furloughed workers, to suppress the virus. It appeared for once that workers’ welfare was being put before capitalist profits. Prior to this, however, the government toyed with the idea of herd immunity, which had the advantage that businesses could stay open and trade normally, where the virus would be allowed to spread among the population. But with the prospect of millions of workers being laid up in hospital, not making profits for their employers and costing the state billions in healthcare, plus an unacceptably high death rate, the government abandoned the idea and reluctantly went for a national lockdown. The fact that it was implemented late likely led to thousands more deaths.

The decision to end the lockdown was based not on the grounds that the virus was beaten but under pressure from businesses that were feeling the squeeze. This and the lack of a functioning track and trace system have, no doubt, contributed to the recent upsurge. Also, the government urging workers to return to their places of work so as to prop up the local hospitality businesses didn’t help.

This time, the government has disregarded the scientific advice to introduce a second short term national lockdown and instead has brought in a three-tier system in England (separate arrangements have been made in Scotland, Wales and Northern Ireland) where different regions are subjected to varying levels of restrictions according to the severity of infections in their area. It is not hard to see why the government preferred this option. Keep as many businesses open as possible and keep the number of furloughed workers to a minimum. However, it has led to run-ins with some of the Northern local leaders. The most notable one is with Andy Burnham, the mayor of Greater Manchester, who initially resisted the imposition of Tier 3 restrictions in his area demanding more money to compensate workers and local businesses.

The government has also to be mindful of the costs of further restrictions. Its debt is already more than 100 percent of GDP, which is creating unease among Tory MPs and Tory supporters in the press.

Although the government couches its measures in terms of saving livelihoods and jobs, it is really capitalist profits they’re worried about. Science is not immune to this priority, so some scientists can always be induced to tell governments what they want to hear. Some scientists have thus signed the Great Barrington Agreement, which argues for ‘focused protection’ and herd-immunity, an approach the World Health Organization and others have described as dangerous, unethical and unscientific. In socialism, we would simply follow the science to beat a virus. In capitalism, nothing is ever so straightforward.