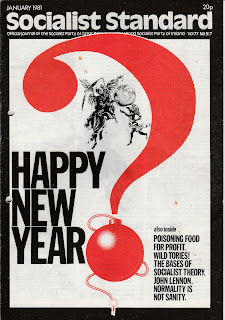 Newspapers have described the tragic death of John Lennon as the end of an era. We wish they were right. We wish it was the end of a period of human society in which rock singers could accumulate millions of pounds from the sale of records while millions starve for want of a bowl of rice; we wish we could write an obituary to the violent social system of capitalism in which men like Lennon's alleged murderer can easily obtain and use a gun; we wish we could report the end of the wars and malnutrition and the inequality which Lennon sang about so well. But the era of capitalism is still with us and there will be others to grow rich singing about the miseries it causes.

Lennon was a talented musician and lyricist who understood the world he lived in more than most of his musical colleagues. Some of his songs showed definite political perception and what is generally considered to be his greatest post-Beatles record, 'Imagine', showed an understanding of the meaning of socialism which is almost unmatched in the history of rock music. The song urges people to imagine a world without possessions, countries, wars, hunger or religion. When a meeting of our companion party, the Socialist Party of Canada, was shown on Canadian TV, 'Imagine' was selected by the producer as the most appropriate theme song to sum up our views.

Rock critics regarded Lennon's message with predictable hypocrisy. While claiming that Lennon was a great musician and that they were in tune with what he was trying to say, they have disparaged such songs as 'Imagine' as an "idealistic vision". (Robin Denselow, the Guardian, 12.12.80.) They prefer to stress Lennon's more easily categorised leftist lyrics, such as those on 'Some Time In New York City' in which he expressed his support for the divisive nationalism of the IRA. Like many people, John Lennon vaguely perceived important socialist ideas, but these became confused with the pragmatic radicalism for which he will be remembered by the trendy sloganisers of the Left. For genuine world socialists the vision of a society of which Lennon sings in 'Imagine' is worth more than any of the sterile aggression of modern punk rock. The man may be dead, but the vision of a world of peace, equality and freedom lives on within the socialist movement which neither Lennon nor his supporters have had the wisdom to join. At the risk of being labelled a Marxist-Lennonist, this writer echoes the words of 'Imagine'

You may say I'm a dreamer
But I'm not the only one
I hope one day you'll join me
And the world will live as one. 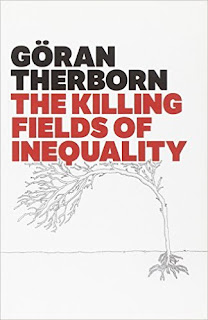 Book Review from the December 2015 issue of the Socialist Standard

'The Killing Fields of Inequality', by Göran Therborn. Polity £14.99.

Yet another book on inequality and its consequences? Yes, and one that contains a lot of statistics but that also has some new points to make about the types of inequality and their impacts on people’s lives.

Therborn distinguishes three kinds of inequality. The first is vital inequality, dealing with people’s life chances (life expectancy, likelihood of years without serious illness, etc). The second is existential inequality, referring to people’s autonomy, dignity and freedom (thus covering any discrimination on the grounds of gender, sexuality, ethnicity and so on). Lastly is resource inequality, primarily a person’s wealth and income but also including the support they receive from their parents.

As this suggests, one of the book’s strengths is its emphasis on inequalities other than those of income and wealth. Therborn argues that what should be aimed at is ‘equality of capability to function fully as a human being’ (taken from the writings of Amartya Sen) and ‘the rights of all children to a good enabling childhood’. As the book’s title suggests, vital inequality is an important aspect of this, and in Ukraine, for instance, life expectancy is three years less for men than it was in 1990. In London among many other places, your lifespan depends to a large extent on how well-off you are. In general, lack of control over your life is bad for your health: the poorer you are, you are not just likely to die younger but to suffer more years of ill health.

As for existential inequality, discrimination on the grounds of gender is decreasing but still exists and is sometimes quite extreme (in South Asia, for instance). Therborn argues that existential equalisation is a non-zero-sum game: if women or gay people are in general subject to less prejudice or oppression, it does not by itself affect the lifestyles of the privileged. In contrast, resource equalisation is zero-sum: if the share of the poorest in the world’s wealth increases, that of the elite will decrease. Hence the rise in resource inequality in recent years, with countries such as Brazil and South Africa being the most unequal. And it was recently reported that there are more billionaires in China than in the US.

But, as so often in books along these lines, it is in the last couple of chapters that the author disappoints. Therborn accepts that capitalism will be around ‘for the foreseeable future’, and he appeals to the middle class (vaguely characterised as the non-rich and non-poor) to align with the poor. This way they can combat both the suffering of the poorest and the exclusivism of the oligarchs, leading to ‘an egalitarian enlightened society’. But he gives no reason to believe that egalitarian capitalism is possible.
Paul Bennett
Posted by Imposs1904 at 7:16 AM No comments: 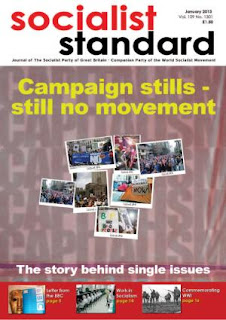