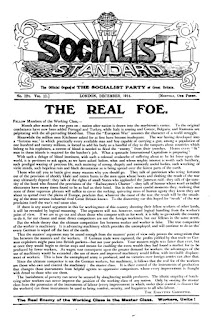 Editorial from the December 1914 issue of the Socialist Standard

It is the season when the Christian nations of a Christian civilisation gather together to celebrate the birth of the Prince of Peace. Death stalks abroad, and murder is blessed by the followers of Christ. The battlefields of France and Belgium are heaped with the corpses of working men sacrificed to the religion of Christian capital, and the god Gold.

The patriotic capitalist takes advantage of the unique opportunity, and while forcing up the price of commodities greatly in demand, schemes and contrives so that he may find the wherewithal to pay for the war by driving wages down to the lowest possible point.

In normal times the lot of the worker is not an enviable one. His standard of living is on the average lower than that of the workhouse inmate or the convict. Years ago statisticians showed that the bulk of the workers did not receive sufficient nutriment to maintain themselves in efficiency, even by depriving themselves of the small "comforts" of life.

To quote Seebohm Rowntree (1901): "the labouring classes, upon whom the bulk of the muscular work falls, and who form so large a proportion of the industrial population are seriously underfed (this remark must be taken to apply to families whose income is not over 26s. weekly and where there are two children or more). The average energy value of the diet in the case of the families selected for study being no less than 23 per cent. below standard, while the average deficiency in proteins amounts to as much as 29 per cent."

Since this statement was made and prior to "the crisis," things had not improved. The great boom in trade adding tens of millions to the income of the "income-tax-paying class" left the worker worse off than it found him. The increase in the money wage has been by no means commensurate with the increased cost of living. Mr. Chiozza Money tells us that the wage of 1908 is as 101.02 compared with 82.86 of 1900, and writing later in the "Daily News" of 16.8.11 he says: "Since 1900 wages have been almost stationary, while prices have advanced about 10 per cent."

An editorial in the same paper dated August 18, 1913, commenting on the Board of Trade report says: "It is depressing to find that for the mass of the people engaged in creating this boom the wave of apparent prosperity has not meant increased wealth but the reverse."

From the above, selected at random from an enormous mass of evidence, it can be seen that the conditions of working-class life have rather worsened than improved.

So the workers faced war conditions, and face the New Year, with reduced vitality, and with the knowledge that, however much the wealth of the Empire has increased, their portion has declined. The "wave of prosperity" has passed completely over them. And what prospect has the war for them? It means increased cost of living; that the little "comforts" that they, by pinching themselves of bare necessaries, could procure, must be removed from the workers' tables. In order that "the burden of the war may fall equally upon all," an increased tax is placed upon beer and tea so as to prevent the worker spending his wage upon other than energy producing food.

Then unemployment has increased enormously, notwithstanding Government figures to the contrary—which do not take into consideration the shorter working day and reduced wages.

The workers, then, face the festive season with the three-headed dragon of modern wagedom more mercilessly virile than ever—lower wages, higher cost of living, and greater unemployment.

Do not imagine these are merely war conditions. The tendency all the time is to increase the efficiency of labour-power relative to its cost, and all food, stimulants, and recreation that add nothing to the productivity of the worker must be eliminated, and the wage slave taught to live on peas and oatmeal in order to become a cheap instrument in the struggle to obtain the trade of some other nation.

As Rowntree himself says in his concluding remarks ("Poverty,"): "These facts, always important, have now acquired an urgency that is not easy to exaggerate, in consequence of the stress and keenness of international competition, and, at a time when increasing thought is being given to the conditions of commercial success, it is not inappropriate to direct attention to a most serious and depressing fact in the present social situation. If adequate nourishment be necessary to efficiency the highest commercial success will be impossible so long as large numbers of the most sober and industrious of the labouring classes receive but three fourths of the necessary amount of food."

And our patriotic masters take this opportunity of lowering the workers' standard of living to one they will find it difficult to improve upon when peace returns.

The parsons, as usual, cloud the issue with sloppy sentiment. The Pope is to issue an encyclical, and the Press informs us that:


"His Holiness draws inspiration from the horrible spectacle of war, and treats of the four-fold crying evils of present day society in its warfare against the Catholic Church. These four grievous wounds are: Lack of brotherly love among men; discord among nations; class hatred; the setting up of material welfare as the sole end."

The Catholic Church has never been an exponent of love. The anniversary of the birth of Christ has oft been celebrated in her torture chambers. Religious dispute has produced discord among nations times without number. Today, however, the discord is plainly a struggle for trade routes. To stay this clash of interests, the struggle for profits and dividends, is to stay the rapacious hand of capital, and such is not the object of the Catholic Church. That is the mission of the workers through CLASS hatred, the rightful and noble hatred for the horrible brutalities of wage-slavery, hatred of the murderous conditions arising from the battle for markets.

What are we strive for if not for "material welfare?" The material welfare of the working class is our sole aim and object. When that object is blazoned on the banner of the workers in place of the now discarded shibboleths of a discontented and morally bankrupt Church; when the workers of the world put the material welfare of their class before the personal profit of a few, then only may they hope, not merely for one happy day in the 365, but for happiness for every day of each succeeding year.
Posted by Imposs1904 at 12:26 PM No comments: 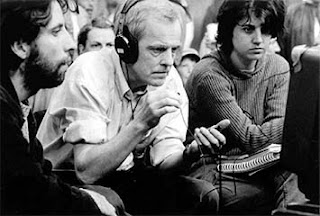