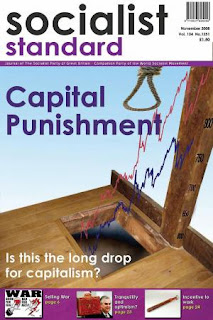 
The credit crisis has tarnished the image of capitalism but its defenders may help it live on by pinning all of the blame on financiers.

Investment bankers have gone in the past few months from being the “masters of the universe” to the object of universal scorn. Across the political spectrum in the United States, particularly at the fraying ends of its two main political parties, criticism of Wall Street can be heard. Even McCain and Obama – whose presidential campaigns have been generously funded by Wall Street – have had to make half-hearted statements about how “greed is, um, bad.”

This criticism is richly deserved, of course, but many of the harshest critics of speculators are fond of capitalism itself and take a rather benevolent view towards other types of capitalists. Greedy bankers and stockbrokers are lambasted, but in the next breath the capitalists involved in the actual production and sale of commodities are portrayed as unfortunate victims of the credit crisis. This one-sided criticism suits the capitalist class as a whole just fine.

Now that capitalists themselves are at least exposing some of the high crimes and low comedy connected to their own financial system, and so much popular attention is focused on the role of money capitalists, it seems particularly necessary for us to attack the false notion that there are “good” and “bad” capitalists; and that crisis could be avoided and capitalism perfected if the bad ones could be kept under control or swept away.

Den of thieves
This idea that bankers – particularly investment bankers – are any worse than other types of capitalists is not convincing to anyone aware that the revenue of all capitalists flows from same source: the exploitation of labour. The dirty little secret of capitalism is that the capitalist class as a whole, and all of the individual capitalists, enrich themselves thanks to workers adding more new value to the commodities they produce than the value of the wages received as payment for their labour-power.

The relations between capitalists are very much like those between a group of thieves, who cooperate to pull off a heist and then divide the loot among themselves. Conflicts easily arise from such an arrangement: as a bigger share for one means a smaller share for the others. Such squabbles, however, are of little concern to the person who has been robbed. Likewise, for workers, divisions within the capitalist class should be of secondary interest to the more fundamental conflict between the exploiters and the exploited.

Yet we need to do more than simply prove that the idea of “good” and “bad” capitalists is wrong: it is also necessary to explain how this false ideology has a basis in reality that makes it seem plausible to many. That basis, as just touched on, is the antagonism that actually exists between different types of capitalists with regard to how surplus-value is divided between them. This fosters the notion that fundamental differences exist between capitalists and that some are more deserving of their revenue – an impression that is further deepened by the fact that revenue takes different forms that appear to be independent of each other.

Marx’s discussion of “interest” and “profit of enterprise” is not directly related to the economic activities of the now-disgraced stockbrokers, as they have made money in more imaginative ways than simply earning interest, yet his observations reveal why it is so easy for bankers to be cast in the role of villains, while those capitalists owning actual means of production appear in a more favourable light.

Magical money
We can begin by looking at interest – or “interest-bearing capital,” to be more exact. The loaning of money to function as capital is the first step in the overall circuit of capital, M–C– M´; and that money (M) is then used to purchase the labour-power and materials of production needed to produce commodities (C), which embody more value than the value of those inputs, making it possible to sell them for a greater sum of money (M´) than initially invested. Part of this surplus in value generated through production is paid to the money capitalist in the form of interest.

With the form of “interest-bearing capital,” however, we only the two extremes of the circuit above, or: M–M´. In other words, nothing more than the money capitalist loaning out money that returns eventually in a greater amount. Money seems to have the magical power to breed more money. Overlooked is the intervening process of production, which is the actual source of the interest earned. As long as interest successfully flows back to the money capitalist, whatever happens between M and M´ is a matter of indifference. It thus appears at first glance – to this capitalist and others – that profits can emerge regardless of production.

This illusion is reinforced by the fact that individual money owners can indeed loan money for non-productive uses. Everyone knows, for instance, that credit card companies make huge profits by charging ordinary “consumers” usurious interest rates. Yet that freedom to direct money towards non-productive sectors, or to engage in speculation on fictitious forms of capital, only holds true for individual capitalists. If a large portion of the industrial capitalists were to withdraw from production, so as to become money capitalists, the ultimate source of profit would quickly dry up and the rate of interest would plummet.

Nevertheless, if we view the capitalist world from the perspective of the individual interest-bearing capital, it seems that profits can materialize out of thin air, without actual production. Marx thus calls interest-bearing capital the “most superficial and fetishized form” of the capital relationship, where capital “appears as a mysterious and self-creating source of interest, of its own increase.” Instead of appearing to be one part of the total surplus-value, interest seems to arise from an inherent property of capital itself, so that any owner of it is entitled to interest.

With interest, we are one step removed from the actual process of production; and from the exploitation of labour that occurs within that process. This fact is at the root of the tendency for people to view money capitalists – and for them to view themselves – as inhabiting in a rarefied world where it is not necessary to get one’s hands dirty. The money capitalists who engage in this mysterious process, whereby money is able to breed more money, both dazzle and disgust those who must earn a living in more pedestrian ways.

Capitalist workers?
If the interest that the money capitalists earns seems to spring out of thin air, the industrial capitalists, in contrast, seem to earn their profits from the sweat of their brow. Their “profit of enterprise” – which is what remains after they pay money capitalists interest – appears to be the fruit of functioning capital, rather than the fruit of owning capital. Just as there is an abstraction from the actual production (= exploitation) process in the case of interest-bearing capital, in the case of profit of enterprise the production process is separated from capital itself, so that it appears merely to be labour process. Profit seems to accrue to industrial capitalists as payment for a useful function performed in that labour process.

There is in fact an important role played by the industrial capitalist, and that is to ensure that the production process is carried out in a manner that facilitates the greatest extraction of surplus-value from workers. Not exactly a noble calling, but exceedingly necessary under the class-divided capitalist system. The profit of the industrial capitalist thus seems to be a “wage” received for this supervision of labour. It appears, as Marx wittily put it, that the “labour of exploiting and the labour exploited are identical, both being labour.” If the former receives far better wages for that labour, it is said to be compensation for its more “complex” character.

This false impression that the industrial capitalist is a sort of worker seems plausible because the act of supervision, necessary in any class-divided society, is confused with the coordination function necessary when numerous workers engage in production together. We need to distinguish between the supervision needed to extract surplus-value from wage-slaves, and the coordination necessary in the case of combined or social labour. In the latter case, the workers themselves can quite easily work things out for themselves and determine the most appropriate way to combine their labour – there is no need for the menacing supervisor. Under capitalism, however, there is a blurring of the two functions, so that it seems as if capitalists (or whoever is hired by them to supervise workers) are performing a necessary function that is intrinsic to the labour process itself.

The real task
Strange things occur when surplus-value is divided up among different types of capitalists, taking the form of different types of revenue. It seems that each form exists independently and has a separate origin – with none of them traceable to the exploitation of labour. With this quantitative division of surplus-value, as Marx notes, “it is forgotten that both [interest and profit of enterprise] are simply parts of surplus-value and that such a division can in no way change its nature, its origin, and its conditions of existence.”

The theory of surplus-value brings to light the connections that actually exist between capitalists, by revealing the ultimate source of capitalist wealth, but that theory itself can be hard to grasp precisely because of the existence of those different revenue forms. Once we take those forms as fixed premises, without considering their origin, it seems natural to judge some capitalists more harshly or kindly than others.

If workers end up concentrating narrowly on the antagonisms between capitalists, it becomes harder to see the more fundamental conflict between wage-labour and capital; and harder to see the real solution to the problems faced. Here we have the old “divide and conquer” approach with a new twist: instead of dividing the working class, the internal divisions of the capitalist class are emphasized to deflect attention from the class divide.

The criticism of Wall Street today that is being voiced by defenders of capitalism is one example of that divide-and-confuse method in action. The current crisis is framed in terms of “Wall Street vs. Main Street” or “the financial world vs. the real economy” – never as a manifestation of the contradictions of class-divided capitalism. With so many criticizing the financial world, while singing the praises of good old commodity production and the capitalists in charge of it, we need to remind ourselves that the production process under capitalism is a process of labour exploitation, a means of generating profits for capitalists.

The task for socialists is not to drive out speculators from capitalism, so as to somehow perfect the system, but to move beyond a world where production is merely a means of capital accumulation. So yes – by all means – let’s chomp down hard on the middle finger Wall Street has been pointing at us all these years, but we should also keep an eye on the hand that robs workers every day on the job.
Michael Schauerte
Posted by Imposs1904 at 10:25 PM No comments: