Obituary from the November 1994 issue of the Socialist Standard

Charlie Sundberg, who died last year, was the last of the generation of members of the World Socialist Party of Australia who were active in the Melbourne area in the 1930s and 1940s.

The Socialist Parly of Australia (as it was then called) had a considerable impact within the working-class movement in Victoria during this period, being the scourge of the so-called Communist Party in the trade unions as well as at outdoor meetings. It was therefore particularly unjust that the name 'Socialist Party of Australia' should have been stolen (and unfortunately retained) by the pro-Chinese section of the CP in the 1970s.

Born well before the first world war the son of Swedish immigrants to Australia. Charlie Sundberg was a skilled craftsman in the engineering industry. He wrote and debated for the Party under the name of "Charles Saunders". Those who have a stereotype of what vegetarians are like will be surprised to learn that he was one. When the history of the SPA/WSPA comes to be written he will have his place. 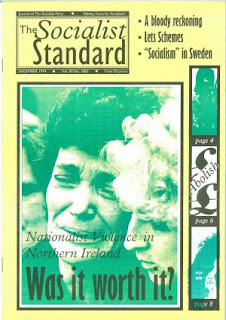 From the December 1994 issue of the Socialist Standard

Throughout the post-war era, Sweden has been portrayed as the archetypal model of the Welfare State having had a Social Democratic government for all but six years. The reformist parties have instanced Sweden as an example of the successful application of Keynesian theories to remedy the worst aspects of capitalism.

Unemployment pay was guaranteed at 90 percent of wages received at the last full-time job. Two-thirds of the population either worked for or received benefit from the State. Public expenditure amounted to 75 percent of GDP (Financial Times, 14 September). In order to finance this degree of spending, the Swedish government had to raise the revenue from taxation and the sale of government stocks. These in reality are lOUs guaranteed by the government to the purchaser. There are however limits to the extent to which governments can raise money by selling government stock. This was forcibly demonstrated last July when Skandia, the largest financial, institution in the Nordic region, sold all its government bond holdings and announced it would not be buying any more in order to finance public debt. Other Swedish institutions have acted likewise (Wall St Journal, 11 July). Overseas purchasers sold theirs and the price plummeted.

Sweden today is facing its worse recession since the 1930s. Gross public debt is projected to reach 92.9 percent of GDP. According to OECD estimates "Sweden has the fastest growing National Debt of any member of the OECD" (Daily Telegraph, 6 July).

Prior to his recent election defeat Bildt and his party of Moderates attempted to deal with the escalating debt problem by privatisation, raising interest rates and cutting the 90 percent dole payout to 80 percent. Unemployment rose to around 15 percent and the Swedish kroner lost one third of its value. The electorate responded by returning the Social Democrats under Carlsson in the naive belief that they can return to the conditions of the pre-slump period. The new Social Democrat government has given priority to cutting the budget deficit, which at present is 11 percent of the GDP, by increasing taxes. Since these already comprise 57 percent of GDP (Financial Times, 30 September) it is probable that other remedies such as welfare cutbacks will be applied. These problems are not unique to Sweden.

In Italy a coalition under Silvio Berlusconi is struggling to maintain what is financially a House of Cards. Italy's borrowings are projected to be nine percent of national output. Pension payments are to be cut back. At present, women retire at 55, men at 60. Early retirement is available after 15 years’ work, pensioners are entitled to 80 percent of earned payments. The Italian government have embarked on drastic cutbacks in pension payments along with an extension of the retiring age. The trade unions have responded with a one-day general strike.

Canada has similar problems. Debt to GDP ratio is at 95 percent:


“Canada is in the vicious circle where deficits lead to higher interest rates, which in turn create further budgetary problems. Such is the compounding effect of interest on the outstanding debt that despite federal spending now being lower today as a proportion of GDP than in the mid-1970s fiscal deficits have become endemic." (Financial Times, 25 October).

Banking crisis
Along with the plethora of media claims that sustained economic recovery is now here comes the claim that the world banking crisis has gone away with the writing-off of the debts of the lesser developed countries. But has it? The Economist (21 October) in an article entitled "Hidden Horrors” suggested that "American banks were taking big new risks, but keeping the exposure to individual countries just below the reporting threshold of bank’s total assets.” The article suggested that the banks are “hiding their exposure behind the individual country reporting threshold." How does this tie in with governments’ debts? Banks hold large amounts of government stock as well as Treasury Bills as part of their day-to-day operations in the banking system. If the bond markets of the world including government bonds lose their value and gyrate wildly then the world banking system is affected. The extent of the volume of bond debt around the world has been estimated at $16.2 trillion (one trillion = 1.000 billion) as the size of the world bond market at the end of last year (Barry Riley. Financial Times, 10 September "A new phase of crisis").

At the recent G7 meetings in Madrid, the spokesman for the various capitalist countries put forward possible solutions. Kenneth Clarke suggested easier terms for borrowing by poorer countries by increasing special drawing rights at the International Monetary Fund, along with a not-so-well received suggestion that the Central Banks should sell some of their gold reserves to help moderate the growing financial crisis. The real concern of the G7 meeting is that the bond debt crisis is related to the heavy borrowings by governments, exemplified by Sweden and other countries mentioned, in order to sustain huge welfare budgets could lead to a major dislocation. The present bond debt crisis is a major contributor to the banking crisis which has not "gone away", but has reappeared in a different form and will not be resolved by all the attempted economic gravity-defying antics of the G7 participants or any other reformist solutions.

The welfare systems as we have known them are coming to an end. The assumption that a capitalist economy that can endlessly maintain welfare payments is false. The notion that “the government will have to do something" or “will find the money somehow" is being disproved by slow but steady developments within capitalism. Re-electing the Social Democrats in Sweden can be seen as an attempt to put the economic clock back to the period of several years ago. The electorate are doomed to disappointment.

In Britain the Social Justice Commission has outlined its plans for the "biggest shake up of welfare for 50 years”. The proposals range from guaranteed minimum pensions, increased child benefits, a national minimum wage along with "community responsibility” and other vote-catching ploys. Tony Blair gave the proposals a "guarded welcome", but the Labour Party can no more solve the problem of a declining welfare system than the Swedish, Italian or any other government.

We are witnessing the demise of the Welfare State as we know it along with the discredited Keynesian economic theories on which it was based. The fact that large sections of the population need welfare payments is itself an indictment of the present profit-based system. The solution is to end the system where people do need them. For this to happen, the working class will have to realise and understand the ultimate failure of these welfare reforms to eliminate poverty and raise their horizons above the derisory crumbs that they offer.
Terry Lawlor
Posted by Imposs1904 at 10:35 PM No comments: