E. Hardy on Crises And Depressions

From the Inveresk Street Ingrate blog

The internet connection should go down more often. Not only did it prompt me to pick up a book to read, but I also happened to stumble upon an old data CD hiding at the back of the bookcase that includes a series of audio files of economics lectures given by the late SPGB member, Edgar Hardcastle.

The talks date from the early eighties - I'm not sure of the exact date - when Hardcastle, himself, was in his early eighties, and I'm pretty certain that these Economics Education classes were organised by the old Islington Branch of the SPGB. They may or may not have been organised around about the same time as Steve Coleman's 'Socialist Thinkers' series.

To be honest, I'm not sure how many talks Hardcastle gave in this lecture series, but I do have five of the talks on the disc and I will post them on the blog over the next five days.

As mentioned above, Hardcastle was in his early eighties when he gave the talks. As his linked to obituary outlines, he was the:

". . . son of a founder member, he went to prison as a socialist conscientious objector in the First World War, formally joining the Party in 1922. After studying at the London School of Economics under Professor Edwin Cannan he worked all his life as a researcher in the trade union movement, first for the Agriculture Workers Union, then for a short while for the international trade union movement in Brussels, then till his retirement for the Post Office workers' union where he was chief adviser to a succession of UPW General Secretaries."

He served on the Editorial Committee of the Socialist Standard for over forty years, and represented the SPGB on many occasions in debate. His pen name, when writing articles for the Standard, was 'H', and when he spoke for the Party he was listed as 'Hardy' in the meetings pages of the Standard.

The use of 'H' as a pen name dates from time in the SPGB's publishing history when the overwhelming majority of Party writers would sign their articles with either their initials or with a pseudonym. I can only guess that he used the Party name of 'Hardy' when speaking for the SPGB because of work commitments.

To give some sense of the span of his political life, speaking as a representative of the SPGB, he debated an Economic League speaker in 1927; a New Party speaker in 1931; Dr Edward Conze (speaking on behalf of the Labour Party) in 1937; Sir Keith Joseph in 1975; Arthur Seldon in 1981; Paul Hirst in 1983; and Kelvin Hopkins in 1988. (That's from an incomplete wiki list here.) 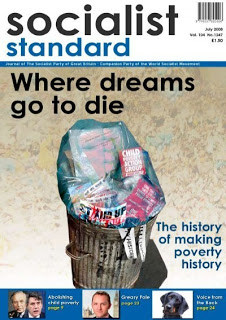 Despite the promises child poverty is still widespread under Labour

Beginning a letter to Labour Party Prime Minister Harold Wilson on 22 December 1965, AF Philip, Chairman of the newly-formed Child Poverty Action Group wrote: “There is evidence that at least half a million children in this country are in homes where there is hardship due to poverty.” He ended his plea on behalf of Britain’s deprived minors thus: “We earnestly beg you to see that steps are taken at the earliest possible moment to help these families.”

So confident that child poverty would be quickly eradicated by the amazing magical wand that Wilson often wielded, Labour suggested the CPAG would be obsolete within a year, the problem it was set up to help eradicate a thing of the past.

In 1997, when the Labour Party took political power from the Tories, Britain had the highest rate of child poverty in the industrialised world – ostensibly the result of 18 years of Conservative attempts to make capitalism work in Britain, via Friedmanite policies. Prime Minister Tony Blair castigated the Tories for their past treatment of Britain’s poorest families and promised to make ending child poverty a ‘New Labour’ priority.

In March 1999, Blair famously remarked: “Our historic aim will be for ours to be the first generation to end child poverty forever, and it will take a generation. It is a twenty year mission, but I believe it can be done.” He went on to commit his government to a series of targets: New, caring Labour would reduce child poverty by a quarter by 2004-2005, halving it by 2010.

Fast forward forty-plus years and the Child Poverty Action Group is amazingly still in existence, despite Harold Wilson having optimistically predicted its death four decades earlier, and we find Blair, despite no dent at all having been made in child poverty figures since Labour had taken power, confidently replying to a letter from the CPAG on 20th January 2006:

“I can promise you that we share your ambition to make child poverty history in our country. It is why we have publicly said we want to halve child poverty by 2010 and eradicate it completely by 2020.”

What was nauseating about this is that here was Blair is telling the CPAG, who in 1965 complained that there were officially half-a-million children in poverty, that by 2010 he will halve child poverty – in other words, slash the number of impoverished children from 3.4 million– the figure for child poverty reported that year - to 1.7 million. So over 40 years after Labour said they would end child poverty, here is ‘New’ Labour setting a figure which was three times the actual 1965 child poverty figure as an achievable target!! Well, at least Blair was cautious in saying child poverty would be eradicated within 20 years – Wilson, after all, promised a year! Moreover, this was Blair writing a year after Labour had failed to keep their promise of reducing child poverty by a quarter by 2005.

That same week, in early 2006, the United Nations would report that children growing up in the United Kingdom suffer higher deprivation, poorer relationships with their parents and are exposed to more risks from alcohol, drugs and unsafe sex than those in any other wealthy country in the world. The report compiled by Unicef said that the UK was bottom of the league of 21 economically advanced countries, trailing the United States which came second to last.

Worse was to come on 10 June this year when the government reluctantly released a plethora of figures in a 200-page report known as the Households Below Average Income statistics – and that was before Scotland's situation was documented. The Scottish figures aside, the report revealed that there are up to 6.4 million children and pensioners in Britain below the poverty line.

The statistics were originally scheduled for release around the time of the 10p tax debacle and before the Crewe and Nantwich by-election, but it seemed there was only too much bad news the public could take and perhaps Labour now realised there will never be a good day in the foreseeable length left of this parliament on which to bury the proverbial bad news.

Commenting on the latest figures, the Institute for Fiscal Studies (IFS) noted that inequality in Britain was equal to its highest level since figures were available in 1961. They reveal that across the UK, the number of children in ‘relative’ poverty rose by an average 100,000 year on year to 2.9 million (or 3.9 million after their family housing costs are taken into account). 2006/7 was the second year in a row that child poverty had drastically shot upwards.

As in 2006, with the Unicef lambasting Britain’s record on the treatment of children, and at a time it was revealed there had been no impact on the reduction of child poverty in Britain, so too now do we find Britain’s treatment of its minors coming under scrutiny in the week that the new child poverty figures were released.

A report to the UN Committee on the Rights of the Child from the four UK children's commissioners, on 9 June, painted a harrowing picture of life for Britain’s kids.

Sir Al Aynsley-Green, England's children's commissioner, said: "Poverty is, in our view, the single most pernicious influence that is blighting the lives and prospects of our young people. We are one of the richest countries in the world. Yet Unicef has found that we have some of the highest levels of poverty. Poverty underpins most of the other social issues we are concerned with."

The report demanded that the Convention on the Rights of the Child to be incorporated into UK law so that children's rights are recognised and legally binding, observing how children's rights have deteriorated in many regards since the last time the UN committee reported on the Government's track record.

Kathleen Marshall, the commissioner for children in Scotland, demanded the UK fully implements the UNCRC, saying: "We have highlighted areas that remain a concern, including significant differences in juvenile justice in some parts of the UK and the public's attitudes towards children and young people.”

The commissioners argued for “urgent reforms” noting that that the age of criminal responsibility is among the lowest in Europe: eight in Scotland and ten in England, Wales and Northern Ireland. Neither, did they feel, was custody being used as the very last resort, predominantly in England and Wales, where there are presently 2,837 children in custody.

Frances Cook, director of the Howard League for Penal Reform, was one of many already aware that the governments hankering after more juvenile justice contradicted the reported drop in juvenile crime and urged that the use of physical restraint on children be banned.

With Labour keen to be seen “tough on crime and tough on the causes of crime”, though few in government will openly admit that poverty causes crime, ever ready to ride the waves of moral panic, it is no more likely that we’ll see cops giving ‘hoodies” and infantile chavs a friendly pat on the head than we’ll see the total eradication of child poverty in Britain by 2020.

Rather than distributing wealth and claiming to have, as its priority, the eradication of child poverty, improving the education and prospects of our children, Labour in fact redistributes poverty like no other government in the industrialised world.

Of course, come election time, Brown and co will make the same staid old pronouncements on their commitment to eradicate child poverty, hoping working class historical amnesia will carry them through to a fourth victory, confident their lies and betrayals and rampant hypocrisy will be concealed by an excess of promises for the future and pathetic excuses for past failings. Meanwhile, their Tory and Lib-Dem detractors, ever critical of New Labour’s record on children will be presenting us with their own visions of smiley face capitalism in which the profit-driven market system will be magically made cognizant of the needs of children.
John Bissett
Posted by Imposs1904 at 2:09 PM 1 comment: