"As a practical industrialist, I am perfectly satisfied in my own mind that if everyone really worked on an efficient basis for four days a week, we could keep the world going and have three days a week for recreation."—(Hugh Mason Crankshaw, President of the Birmingham Exchange, Sunday Express, April 2, 1944.)

Email ThisBlogThis!Share to TwitterShare to FacebookShare to Pinterest
Labels: May 1944, Quotes, R1944, Shorter Working Week Links to this post

From the September 1976 issue of the Socialist Standard

Monday morning coffee break and we’re swapping notes on how we spent the week-end. For two of us it had been the same as usual. As ‘working girls’ trying to keep some sort of comfortable home, the best part of the two days had been spent doing the chores which inevitably pile up during the working week; leaving us little time to relax and enjoy visiting or being visited for the afternoon.

However, for once Jenny had left the chores to deal with as and when possible and, making the most of the glorious weather, had had a lovely day out. Her husband’s boss had invited his staff and their wives down to his home on Saturday; even the return train tickets were provided.

It was no wonder they enjoyed their day out. A beautiful country mansion near one of the Southern Cathedral Cities of England, with efficient rail service to London. The spacious grounds contained, apart from formal, herbaceous and vegetable gardens, a croquet lawn, tennis court and swimming pool. The thoughtful hosts had even provided costumes for those who wanted a swim. A delicious lunch was served on the terrace, charmingly presided over by the lady of the house who, together with her husband, showed an interest in, and concern for, the welfare of every one of her guests. In fact, as Jenny said, they did everything to make this a perfect day for their guests — they were so kind!

That the guests had been invited to enjoy for one day what their labour had provided permanently for their employers did not occur to any of them. However, knowing very well what is provided, I think the employers would have found it easy to be kind! 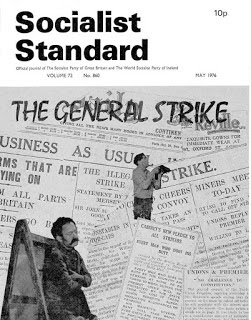 When Mr. Harold Wilson shuffled-off to the Back Benches recently, the questions posed at the various post-mortems held on television during the following days suggested that he had almost shuffled off his mortal coil. What were his greatest achievements? What was his finest hour? and so on they asked with serious reverence. Broadly the conclusion reached by friend and foe alike was the one which Mr. Wilson had advanced himself: During his term as Prime Minister he had held the Labour Party and the country together over a very difficult period.

Even a favourable interpretation of this “achievement” can only mean that he played an active part in the continuation of capitalism — a system which works against the interests of the majority. To be fair to him, he most certainly did not control it. Nor was he personally responsible for the 1.25 million unemployed, the housing problem, 22 per cent. inflation, or for the Labour Party’s current message that the poverty of the working class is to be heightened. Despite any illusions to the contrary, he did not, nor could not control these factors. They are an inherent part of the private property society which all other political parties advocate. Mr. Wilson was not the master of his system, but the servant of capital.

It appears that “wandering” John Stonehouse MP must be on his guard if he wishes to retain his position as chief clown. Although there are many contenders for it in the Palace of Westminster, we note that Mr. Eldon Griffiths, Conservative MP for Bury St Edmunds, is making a serious challenge.

Britain has become a ‘Mug’s Island' where a worker can be worse off than a shirker . . . another case from his post bag told of a woman who would receive £17 a week tax free if she was unemployed, but who earned only £9.97 more for working a 37.5 hour week.

Although Griffiths sees this difference as only marginal, he does not question the fact that £27 a week is a “reasonable” wage, but only that £17 is an unreasonable amount of dole in proportion to it. The talents of his correspondent must indeed be great if she, or anyone else, can live the “good life” on her pay — let alone £17 a week dole. But the figures themselves are largely theoretical to Mr. Griffiths — for one thing he would not dream of performing his “work” for the two sums added together.

But in view of Griffiths’ remarks, and the recent announcement from the Australian government that the “dole bludgers” (those the government considers “unwilling” to work) are to be severely limited in drawing the bountiful dole money, the Sunday Telegraph was led to make the following editorial comment.

[This] will provide food for thought among those who suspect that in this country too, the “dole” is a thoroughly civilised benefit which is capable of uncivilised abuse. Mr. Eldon Griffiths, MP, pointed out yesterday that there is a new kind of social injustice in Britain, the penalising of those who work in favour of those who do not or will not work . . . Harshness in this respect would be intolerable, above all when so many are unemployed through no fault of their own. Nevertheless there is something wrong with a society which punishes workers and rewards idlers.

Something wrong? This time they said it for us. But they also showed where Mr. Griffiths had gone wrong: they identified the real parasites on another page. Apparently Sheikh al-Tajir (the “most chic sheikh in town”) had been out buying a few items of clothing for himself.

The sheikh bought 96 items from Kilgour French and Stanbury. They included five overcoats made of vicuna — the hair of the Southern Peru llama — which at present cost £1800 each. He has also bought several cashmere mink coats and a large quantity of suits, including many made of pure Italian silk. The buttons on his blazers arc all specially monogrammed silver.

So workers are worse off than shirkers (and sheikhs apparently). There may be some truth in this after all. One thing emerges, the real idlers do not bother with dole money — for one thing at this rate it could not buy a button. For another they have no need — they own the means of wealth production.

The apologists for capitalism, among other sterile views which they air, often argue that many of the problems raised by the system could be resolved if only members of the capitalist class could agree among themselves over what should be produced, and where etc. It is a utopian concept because it ignores the fact that anarchy in production is one of the characteristics of their system. Each is driven to use capital as profitably as possible, which in turn engenders competition with other capitals and a lack of any social plan. However, when some form of agreement is tried, such as the one between the Society of Motor Manufacturers and Traders, and the Japanese motor industry, the result has been a backfire.

Apparently 31,650 Japanese cars were registered in Britain during the first three months of 1976 — a figure in excess of the one agreed. However, such a slur upon the good intentions of the Japanese was rebutted by their official body, the Japanese Automobile Manufacturers Association, in the Financial Times of 15th April. The registration figures were outside their control — in fact "shipments of Japanese cars to the UK during the first quarter of 1976, at 25,135, were lower than the export statement forecast made by JAMA at the December meeting." They take the trouble to point out however that what the British SMMT consider was a promise to restrict sales, was only “to make export forecasts, while not making any actual commitment on exports." While SMMT and JAMA attempt to sort out this difference, further developments have taken place:

Because British cars have been in short supply, imports from EEC countries have increased substantially from 66,969 in the first quarter of 1975, to 81,100 this year. It would appear therefore that the restraint expected of Japanese car manufacturers simply means the substitution of Japanese cars in the UK market by other foreign cars.

That’s the trouble with capitalism, the apologists will tell us, no sooner that we get one thing sorted (and not very successfully at that), than we get another crowd sticking their oar in. Why, they ask, can’t they all be more reasonable?

From the May 1976 issue of the Socialist Standard

We have been asked to clarify references, in the March Socialist Standard, to Prefaces to the The Communist Manifesto by Marx and Engels.

Page 50 of the March issue refers to the 1872 Preface. This was written jointly by Marx and Engels, not Engels alone. The quotation from it omitted a word, and should read: “no special stress is laid on the revolutionary measures proposed at the end of section 11. That passage would, in many respects, be very differently worded today.” The omission was inadvertent; in case anyone thinks otherwise, he will find the phrase “revolutionary measures” on the preceding page.

On page 57 the 1888 Preface is referred to in a reply to a correspondent. This was written by Engels, Marx having died five years earlier.

For further enlightenment, readers are advised to try to get hold of a copy of our 1948 publication (now, unfortunately, out of print) The Communist Manifesto and the Last Hundred Years, in which the full text is given with a long introduction by us.
Posted by Imposs1904 at 6:19 AM No comments: