From the May 2008 issue of the Socialist Standard


Nineteen sixty-eight was a year of dramatic political developments – the assassination of Martin Luther King, violent demonstrations against the Vietnam War, uprisings in the black ghettos of America, a month-long General Strike in France, the Russian invasion of Czechoslovakia.It was also, though not being recalled by the nostalgia department of the BBC, the year when the Labour government of the time was in dead trouble, trying to impose wage restraint, introducing racist legislation to keep out Kenyan Asians, losing by-elections to Scottish and Welsh nationalists. But they still managed to stagger on for a couple more years before being voted out. Even fewer recall that 1968 was the TUC’s centenary.We reprint here what we said on some of these events.


“As an insurrectionist slogan, black power is suicidal. Only 15 per cent of the population in the U.S. are black. One needs no great mathematical skill to figure out who would be victorious in a racial war, not to mention the fact that a bottle full of gasoline is a rather inadequate defense against fleets of helicopters and tanks, armed with napalm, poison gas, and fragmentation bombs. 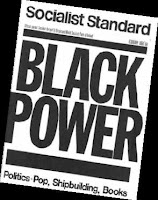 As a revolutionary theory, black power is divisive and self-crippling. Attacks on the "white power structure" mean little unless one understands that the source of its power is not the skin colour of the bureaucrats, but the enormous property values which employ them. We have already mentioned that any part of the working class cannot alone solve problems which stem from their position as wage workers; they must act together with the majority of their class. The concept of black power implies that black workers have basic interests which conflict with those of white workers. Both black power and white prejudice divide the working class against itself, thereby weakening the class and diminishing the power of each of its members. Black power is not a cure for exploitation, but a symptom of the disease.

Nevertheless, it is possible that black power may also be a healthy sign in the American working class movement. The young insurrectionists of Detroit, Newark, Boston, Cincinnati, do belong to the urban working class, and this is the first time since the 1930s that masses of American workers have broken with "their" government and openly defied it to put them down. Some black power leaders also feel the need for greater support among white workers, and stress their goals of better schools and housing will benefit more white than blacks.
Class consciousness takes a long time to develop. One of the signs of its development is a wholesale rejection on the part of workers that a treadmill is their only possible alternative in life. The black powerists, the hippies, and the peace movement suggest that large things are happening in America which the socialist need not regret.”
(“Black Power in the United States”, February).

The General Strike in France

“The following manifesto (for distribution in France) was adopted by the Executive Committee of the Socialist Party of Gt. Britain on 28th May. This is the English translation.

We address you not as citizens of one country to citizens of another but as world socialists to fellow members of the world working class.

We reject frontiers as artificial barriers put up by governments. All men are brothers and the world should be theirs. All men should be social equals with free access to the plenty that could be if only the means of living belonged to a socialist world community. We oppose governments everywhere, all nationalism, racism and religion, all censorship, all wars and preparations for war. 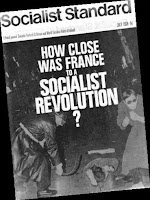 Workers! We support your class struggle for better wages and conditions against the employers and the government. But do not be taken in by the ease with which you have occupied the factories. They allowed you to do this because they know that in time you must give in. Political power is always in the hands of those who control the machinery of government, including the armed forces and the sadistic CRS. Do not be misled by those who say that universal suffrage is a fraud. Learn from your masters. You too must organise to win political power if you want a new society. Do not let cunning politicians or the discredited Communist Party return to power on your backs. Ignore those who would be your leaders. Rely on your own understanding and organisation. Turn universal suffrage into an instrument of emancipation.

Students! We share your distaste for the indignities and hypocrisies of the present order. We share your wish for a new society with no exploitation of man by man. But do not underestimate what a task it will be to change society. It will be a hundred times more difficult than changing the government. A democratic world community, based on common ownership with production for use not profit, can only be set up when people want it and are ready to take the steps needed to set it up and keep it going. Democratic political action is the only way to Socialism. There are no short cuts. We must have a majority actively on our side. Do not be misled by student demagogues, those who praise Bakunin, Trotsky, Mao or Che Guevara, who would use you for their own mistaken ends. They think that an elite should use unrest to gain power and then set up a classless society. What dangerous nonsense! Look at state capitalist Russia where a new privileged class rules, with police intimidation and censorship, over an increasingly restless population. Look at state capitalist China where power-hungry bureaucrats cynically manipulate the people in their own sordid squabbles. Learn the lessons of history: elite action leads to elite rule. No Socialism unless by democratic political action, based on socialist understanding.

The task you face in France is the same that we face in Britain and our brothers in Germany, Russia, the United States and other countries: to build up a strong world-wide movement for Socialism. What is needed more than anything else in this period of social unrest is a clear, uncompromising statement of the case for a socialist world community.

If you agree, please write to us. We will be glad to help you ensure that the voice of Socialism is again heard in France.

Workers of the world, Unite !”
(“To the Workers of France”, July)

“Millions of viewers of the BBC programme last June on the students will have heard Tariq Ali declare "we believe in the abolition of money". Someone pointed out that "the others looked very doubtful". As well they might. Even Cohn-Bendit has only called for equal wages, presumably to be paid in money. Tariq Ali himself probably did not understand the implications of what he said. But he did break a leftwing taboo. Normally they don't like to fly so much in the face of popular prejudice and risk being called "Utopians". No, normally they like to be seen as r-r-revolutionaries boldly declaring they believe in violence!

Whatever the reason for his lapse Tariq Ali did at least provoke some discussion in the papers as to whether or not it was practical to do away with money. Most people ridiculed the idea but one Guardian letter-writer pointed out that the absurdity of capitalism should be obvious every time you get on a bus and have "to exchange metal discs for a ritual rectangle of paper which an intelligent man was paid to punch".
(“What! No Money!”, September)

“The dictators of state capitalist Russia have sent their armies into Czechoslovakia in a bid to impose a puppet regime which will carry out their orders to crush free speech and restore rule by torture and the secret police. ( . . .)

The Socialist Party of Great Britain wishes workers there every success in establishing the framework within which a genuine socialist movement can grow, namely, political democracy.

The crude power politics of Russia once again expose the myth of Socialism there. Russia is a great capitalist power and behaves like one.

The Socialist Party of Gt. Britain abhors this latest display of imperialist brutality, all the more vile as it has been committed in the name of socialism, and calls upon the workers the world over to oppose capitalism, east and west, and to unite for Socialism.
August 21st 1968”
(“Power Politics and Czechoslovakia”, September).

Vietnam demonstrations
“Socialists were out in force to sell genuine Socialist anti-war literature at the pro-Vietcong, and thus pro-war, demonstration held in London on Sunday 27 October, about which the press spread such hair-raising scare stories.

On the Friday evening, when students of the London School of Economics occupied college buildings to turn them into a sanctuary for the demonstrators, Socialists (including two who were LSE students) were able to hold an impromptu meeting and sell a few dozen SOCIALIST STANDARDS. A photograph appeared in Saturday's Morning Star in which one of our members selling this journal could clearly be seen.

At 12.30 on Sunday, thirty or so Socialists were at Charing Cross to get ready to sell literature to the demonstrators as they marched to Hyde Park (we stayed well away from Grosvenor Square and the hooligans). Of course, as with CND, we did not join the march but sold literature to the marchers and by-standers. The cover of the October SOCIALIST STANDARD can have left no one in doubt as to our position: VIETCONG, NO! MAO, NO!, CHE, NO! SOCIALISM, YES! Up to 600 copies were sold in what turned out to be a very successful afternoon's socialist activity.”

(“Socialists and the "October" Revolution”, December)

The Socialist Party will have a stall at the 1968 and all that International Conference and Bookfair, which takes place next Saturday, 10 May and which will be held at Conway Hall in Central London.

The Socialist Party will also be holding a meeting at the Conference on the subject of France in '68.

Was there really a revolutionary situation in France in May 68?
Speaker: Adam Buick
Room: Artists Room
Time: 3pm
Posted by Imposs1904 at 9:12 PM No comments: