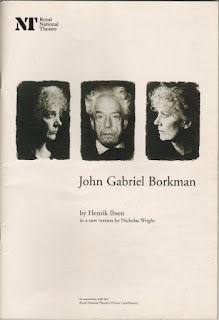 Theatre Review from the August 1996 issue of the Socialist Standard

Borkman the power-seeker does a deal with a friend so that the friend can marry the woman Borkman supposedly loves, whilst Borkman marries her twin. Caught embezzling the bank's funds he serves eight years in jail and then spends the next eight locked in his own room waiting for the call to come, waiting for "the man of vision" to work the financial miracle [sic] on which the well-being of the grateful citizenry supposedly depends.

The action of the play takes place over a few hours. The arrival of the woman he once loved, and now his sister-in-law, and his son's affair with a married woman, force Borkman out into the open - both figuratively and literally - and he dies of a heart attack on a freezing mountainside.

Writing in the programme Michael Ratcliffe notes that Ibsen, like his contemporary Marx, recognised that the pursuit of capital corrodes human relationships. But if Ibsen is, in consequence, critical of nineteenth century capitalism, this is not apparent in the play - or at least the current production. We are presented with a slice of bourgeois life: sisters who don't talk to one another, an aunt who tries to appropriate another's son as though he was a possession to be claimed, an estranged husband who has become almost a hermit, and so on. It isn't very edifying, but as played on the stage of the Lyttleton Theatre one would think it all very normal and unexceptional. Presumably the audience is supposed to be shocked by the pretension, the egocentricity, the cold inhumanity of most of those on display. But if shocks were intended they were certainly not realised when I saw the play in preview. Indeed the final scene in which the callous Borkman dies still muttering about his vision, and now apparently forgiven by his sister-in-law, fails to generate any of the feelings of disgust and anger which it so clearly warrants. Cast and director appear to be demanding our sympathy rather than stirring our revulsion and horror.

The audience seemed not so much sympathetic or affronted, as bored - apart that is for those happily clapping the reputations rather than the performances of an all-star cast, and enrolled members of the Institute of Directors. I wanted to boo. The play is presented in association with the National Theatre's Private Contributors. Presumably on behalf of the international capitalist class?
Michael Gill 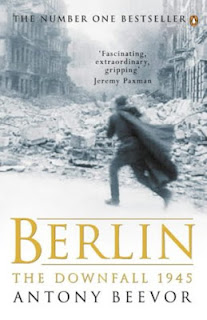 Book Review from the September 2002 issue of the Socialist Standard

For those able to recall the fall of Berlin in April/May 1945, Anthony Beevor's book is a powerful reminder of the horrific events that brought the war in Europe to a close. These final stages of suffering, death and destruction were only relieved by the hope that the war was near its end. At the time our knowledge was limited to what was made available through the press, radio and newsreel, all of which was heavily censored. Since then, the story has been re-told with more information becoming available. Anthony Beevor has had the advantage of access to archive material and, particularly since the fall of the Bolshevik regimes in Russia and East Europe, to the archives of the KGB.

He is able to tell us for example how the Russian campaign to take Berlin was partly shaped by the desperate need of Stalin and his henchmen to get their hands on nuclear materials. From Klaus Fuchs and other spies, Stalin was aware of the Manhattan Project (the American programme to develop the atom bomb). They were also aware of similar though less advanced research in Germany partly at the Kaiser Wilhelm Insitute for Physics which was situated west of Berlin at Dahlem, designated as part of the post war carve up to be in the American Zone of occupation. The huge numbers of Russian casualties were caused partly by the determination to occupy this research facility. As a result, the NKVD (later the KGB) were able to take possession not just of scientists but “250 kgs of metallic uranium; three tons of uranium oxide; twenty litres of heavy water”. This also reminds us that the death and destruction that marked the fall of Berlin was to continue for three more months in the Pacific culminating in the use of even more terrifying weapons, the atomic bombs dropped on Hiroshima and Nagasaki.

What happened at Dahlem with the arrival of Russian troops who, with their bitter knowledge of the atrocities carried out by German forces in Russia and East Europe, were in a frenzy of hate and revenge, was an accepted part of the Russian advance. At its convent, which was also a maternity clinic and orphanage, “Nuns, young girls, old women, pregnant women and mothers who had just given birth were all raped without pity”. Estimates from the two main Berlin hospitals ranged from 95,000 to 130,000 rape victims. One doctor deduced that out of approximately l00,000 women raped in Berlin, some 10,000 died as a result, mostly from suicide. “Altogether at least two million German women are thought to have been raped, and a substantial minority, if not a majority, appear to have suffered multiple rape.”

According to Anthony Beevor, “Stalin and his marshals paid little regard to the lives of their soldiers. The casualties for the three fronts involved in the Berlin operation were extremely high, with 78,291 killed and 274,184 wounded.” The numbers for German forces would have been similar but with many more civilian deaths. For those who lived, conditions became disease ridden and primitive. With the shelling and constant bombing, “Over a million people in the city were without any home at all. They continued to shelter in cellars and air raid shelters. Smoke from cooking fires emerged from what looked like piles of rubble, as women tried to re-create something of a home life amid the ruins.” The casualties amongst women were especially high. With the water system damaged many were killed queuing with buckets at the street pumps. One lingering image is of desperate women, shuffling up to fill the gaps in the queues caused by exploding shells.

On the 30 April Hitler and his bride of the previous day, Eva Braun, killed themselves. Just north of Berlin, Ravensbruck, the women's concentration camp was liberated. On the 1 May Goebbels and his wife Magda killed themselves together with their six children, all aged under twelve.

Anthony Beevor makes no attempt to be seriously analytical. He takes the war as given. His book is then a monumental description of its brutal closing events and the interplay of leading personalities, particularly as they acted out the final drama in the mad, hysterical atmosphere of the Fuhrer's bunker. It was in that closely confined underground space that extreme authoritarianism, blind fear and obedience, and a deranged ideology combined to produce a descent into utter self-destruction. As the main actors lost all contact with reality the author describes this descent as the “Fuhrerdammerung,” but nothing in Wagner's works could match the real life tragedy.

The absence of analysis in Anthony Beevor's book invites us to think about the causes of this death and destruction and to reflect upon the wider social context in which it happened. One response has been to simply say that Hitler was mad. It is very likely that this was true but it still leaves unexplained the reasons why millions gave him the political support from which developed of one of the most hideously cruel regimes of the 20th century.

The reading of page after page of destruction, rape and killing gives the impression that entire populations had gone collectively mad. This was despite the undoubted ability of all to co-operate in ways that could have enhanced the lives of everyone. Instead of a rational understanding of how we could best serve each other's needs through unity there prevailed the divisive and hateful ideologies of nationalism, leadership and racism. And it was the background of national economic rivalries that allowed these attitudes to fester and grow with such disastrous results.

But what have we learned since then? There is not much to be hopeful about. The huge gap between our mutual interests and the ideas we need to realise them seems to be as wide as ever. As a result, the destruction and the killing continues. One lesson of Anthony Beevor's book is that whilst our ideas remain out of harmony with our need for unity and co-operation we will always remain liable to be manipulated into elevating the miseries of death and destruction over peace, security and the pursuit of happiness.
Pieter Lawrence
Posted by Imposs1904 at 10:00 AM No comments: 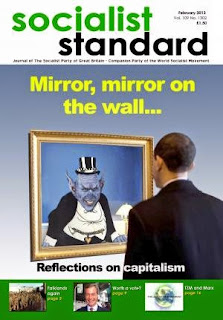 Editorial from the February 2013 issue of the Socialist Standard


David Cameron’s accent, though less plummy than some of his Tory predecessors, fairly tinkles with the sound of silver spoons being removed from their mahogany cases.  We Brits with our highly attuned class antennae know a toff when we hear one.  So when considering how it is that this man’s government is preparing to unleash a programme of ‘welfare reforms’ that seems set to devastate the lives of thousands of working people, cynics observe:  ‘How can you expect a man like Cameron to begin to understand the needs of ‘ordinary’ working people’ – many of whom, it is often said with real justification, live one payslip away from destitution.

There is some truth in the observation, but Cameron’s ignorance of working class lives is not the source of his government’s attack, because, underneath the superficialities of accent and dress, class exists as part of what a capitalist economy is, and plays a leading role in government policy.

Economic class is much simpler than the British, multi-tiered system of class identities.  It’s an objective matter of wealth: if you don’t have sufficient wealth not to have to work for a living then you are member of the working class.  It doesn’t matter whether you work in overalls or a business suit, on a building site or in front of a PC; if the only way you can support yourself or your family is to work for a wage or a salary, then economically you are working class.    If you can derive a good income from the wealth you own through rent, interest and profit, then you are a capitalist.

Class defined in this way is not a doctrinaire attempt to stick labels onto people that may not want them.  It is not a personal or arbitrary decision, but an observable matter of social conflict.  The working and capitalist classes not only possess a different degree of wealth, but they use it in different ways: the worker uses it to live, the capitalist to extract more wealth from the worker.  This sets their material interests on a direct collision course.  Under threat of annihilation and bankruptcy in the capitalist marketplace the capitalist class is forced to reduce wages at every opportunity and to get more productivity out of its employees. The working class, to protect its standard of living, is forced to resist.

The shiny, immobile features of David Cameron and his exclusive Eton education may be markers of his class, and he may lack understanding of the lives of workers, but the class issues that determine his government’s policy-making are not personal attributes of politicians.  In government, Cameron and his cabinet colleagues are representatives of the capitalist class, and it is in the objective interests of the capitalist class and not the working class that his government, or any government, must act.
Posted by Imposs1904 at 9:53 AM No comments: