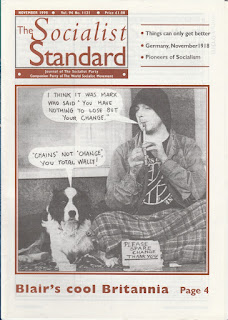 From the November 1998 issue of the Socialist Standard

This was the relentless backing track to an illusion. The Tories had been in power for too long. Labour was different. New. It was brand New Labour. It said just the same sort of things as the Tories, but . . . well, Things Can Only Get Better.

Then came the election. In a ritualistic act of public humiliation tribal leaders were tied to a pole (in fact, a poll) and beaten across the arse with bamboo sticks. The only happy part of watching New Labour's act of monumental fraudulence transpire was the joy of observing the defeat of Thatcher's little errand boys. David Evans, the foul little racist bigot - You're out, son. Olga Maitland, that personification of air-headed educational failure - Bash; you're dead. Rhodes Boyson, the pompous Tory oaf who campaigned for the teachers' right to beat children - Thwack; you're out of a job, kid. And power-hungry, odious Miguel Portillo, the Thatcherites' favoured son, forced to concede defeat and accept a short-term contract making documentaries for the BBC on why the Tories are losers. The immensity of the vote in 1997 was not for New Labour. It was against the Tories. Within days Major faded away into appropriate obscurity and Hague just faded into obscurity. The little boy had inherited the sweet shop, only to discover that he had no teeth with which to chew. For the Tories, things could only get better - eventually. Meanwhile, they look through their telescopes trying to see Europe across a foggy sea, never quite spotting it because their navels get in the way.

But on that famous night of folly and suckers' celebration, who cared about the rotting corpses of fallen Tories? Tony was in. Labour had died and been reborn and now New Labour would build the new Jerusalem in England's green and pleasant . . . not yet though. New Labour had little to say about building a new Jerusalem. Utopians they were not. New Labour "faced reality" more often than Muslims faced Mecca. They worshipped Reality. Capitalism is Reality. You don't have to like it, but it's here . . . it's real . . . it's what we're here to run. And nobody can accuse them of not saying it. No snivelling, whining Trotskyist can drone on about being betrayed and the leadership selling out because New Labour has been to capitalism what a fly is to a lump of shit. New Labour was unapologetically honest: it was out to run the market without illusions. The SWP and its deluded leftist rivals urged workers to vote for New Labour "without illusions" because they too fell for the myth that "Things can only get better". They too were duped by the choice of the lesser evil.

So, the suckers got what they voted for. How they danced in the streets as Tony went to see the Queen to pledge his loyalty as her UK District Manager. The Blairite press reported degrees of ecstasy reminiscent of the climax scene in When Harry Met Sally. Life under New Labour was going to be one long orgasm. Things could only get better.

A few Labour lefties sounded notes of discontent. Scargill's semi-reconstructed Stalinists bleated that this wasn't the sort of Labour Government they'd spent their lives trying to elect. For them, the golden age had been 1945-51 when Labour was Old, Betty Boothroyd was a go-go dancer and false teeth were free. What they neglected to recall was how Attlee's Old Labour had taken Britain into NATO and sent observers to ensure that Hiroshima was bombed to dust and used troops to break up the dockers' strike. The nostalgia for Labour's imagined socialist past was as deluded as the breathless eagerness of New Labour for its ever-modernising future.

And that was the New Labour agenda. Modernise the system. From the House of Windsor to the NHS New Labour stepped into action like a team of time-and-motion experts, out to show the way to lower costs and higher profits. When it all went wrong - as every endeavour to control the capitalist system always will - they blamed the world market and globalisation and an unexpected world recession. You see, the suckers who elected them had failed to sing beyond the first line of the song: Things Can Only Get Better . . . as long as world capitalism doesn't get worse, in which case they can only get worse. So modernisation of the economy gave way to hanging on in the face of difficult economic circumstances, and New Labour started to sound much more like Old: Brown like Healey; Blair like Wilson.

When governments come to realise that they are not in control of the capitalist system, but it controls them, they turn inevitably to matters cosmetic. So, all the big talk about Education Education Education and the NHS and caring for the disabled (by cutting their benefits) was quickly abandoned and in its place came the new panacea: Cool Britannia.

Cold Britannia
In Brezhnev's Russia politically approved pop groups would be recruited from time to time to appear on TV and allow fat party bosses to be seen bopping to them. It was an unseemly site, devised in a pathetic attempt to show that privileged plutocrats were really just like wage slaves in the sausage queues. Cool Britannia was a cynical use of imagery to suggest that Blair's Britain was abuzz with exciting new happenings that were the envy of the world. From The Spice Girls to Oasis to Chris Evans to Grant from East Enders, the great and the grating on your nerves were invited to Number Ten to show what a cool guy Tony really was. Vast sums of advertising expenditure was devoted to telling people that it's cool to be British. The useless, senseless, hideous Dome was the icon of coolness.

For many, life was less than cool. For the pensioners, trying to make it on 65 pounds a week; for the single parents; for the prisoners of the slums called council estates; for the disabled who were told that it was going to be harder to claim benefits under New Labour's tough love; for asylum seekers whose futures were all too easily sacrificed on the altar of tabloid popularity; for nurses who, after eighteen years of waiting, are still facing a fall in real wages; for those stuck in the negative equity trap; for kids who are now being told by the government what time they should go to bed, and against whom the New Labour Minister, Paul Boateng, demands the right of parents to use corporal punishment. What's cool about Britain for these people? What's cool for those destined to sleep in short-term accommodation or on the street? For them, it's cold Britannia.

But Mr Blair has another idea. Perhaps it is to dignify the puffery of empty talk too much to call it an idea, but to be sure it has a name. Mr Blair is an advocate of The Third Way. Neither capitalism nor socialism, but . . . well, capitalism with things getting better. Socialists have had a name for this Big Idea for a long time: it's called Reformism and it does not work. Reformists believe that they can have the capitalist system, with its inherent laws of profit before need, and run it to satisfy both profits and needs. Labour, Tory and Liberal reformists have all believed in this strategy, now renamed The Third Way, and not one of them has been able to manage capitalism so that profits defer to human needs. The Third Way is a new term for sterile old reformism, just as New Labour is a new term for Old Labour's failed reformism.

The Third Way. Cool Britannia. Things Can Only Get Better. Things Go Better With Coke. These are not principles, ideas or policies, but images, propagated like drugs to induce in the gullible a trance-like state of pseudo-security and contentment. Things can only get better? Just Say No. Say no to all the hollow crap of politicians' dope-talk, and ponder the indisputable point that things will only get better once this system is no longer, and the only people who can remove it is you, its victims.