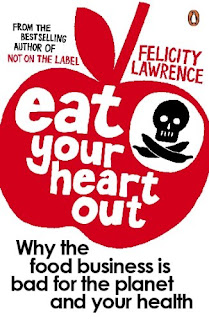 Book Review from the March 2009 issue of the Socialist Standard

Lawrence describes conventional farming as ‘a system for turning oil into food’. There is simply more profit in industrial food production than in plain healthy food like fruit and veg. Consequently consumers’ food choices are manipulated, so that we ‘want’ what the food industry sells at the biggest profit and we buy what we have been persuaded to buy. This is mainly achieved by advertising, but also by more insidious means: adding massive amounts of sugar to baby food gets babies, and therefore children and adults, hooked on sweetness.

Let’s take a couple of case studies. Processed cereals, for instance, represent ‘a triumph of marketing’. And agricultural subsidies from government help to keep companies’ costs down and profits up. The nutritious part of cornflakes is deliberately removed because it gets in the way of a long shelf life. As a result of this and the addition of sugar, breakfast cereals fatten you up but provide little by way of nutrition. Since relatively few countries eat much cereal, there is plenty of scope for global expansion, with Kellogg’s targeting a potential 1.5 billion new customers, and prepared to spend massively to attract them.

The globalised pork and bacon industry has based its enormous profits on two elements: factory farming with little or no regard to the environmental impact, and low wages mostly paid to migrant workers. The farmers who contract to raise pigs for the processing companies make just enough to get by, and the buildings they invest in are likely to put them in debt to the bank. Meanwhile the big corporations enjoy enormous profits with relatively little capital investment.

As the cereal example shows, food produced with an eye to profit is not good for you, and may be positively dangerous. Sugar, for instance, has been described as being as harmful and addictive as tobacco. The evidence is not conclusive, but arguably the extent of cardiovascular diseases in developed countries is in part due to an imbalance of fatty acids (too much omega-6, not enough omega-3). Cancers, too, are in part caused by our diet. Soya is seen as a miracle health food, but it is in fact a key ingredient in the fried and oiled junk food market.

Lawrence has provided a graphic description of profit-driven food production. We can’t agree with her claim that what’s needed is ‘a fairer distribution of the profits’, since that would leave the profit motive intact. But we have more sympathy with her conclusion that it’s necessary to examine ‘the power structures that control food supply’, as long as this goes along with overturning the structure of all production and distribution.
Paul Bennett
Posted by Imposs1904 at 5:33 AM No comments: