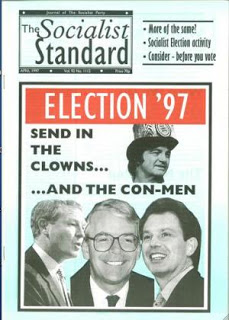 
Of all the concessions from capitalism that workers have fought for and won over the years the right to vote is potentially the most important. But simply being able to vote isn’t enough, it’s what we do with it that really counts.

We are told that we live in a democracy. In 1914 and 1939 we were told that that democracy was threatened and that it was necessary for working class people from this country to take up arms against workers from other countries to preserve our freedom and our democratic way of life. In between, of course, there have been numerous other lesser occasions when the people who run the country told us it was in our interests to go out and kill workers from some other place. So we are free people enjoying a democratic way of life that ensures freedom for all?

Does this mean that the parent(s) of the nearly four million children enduring life on Income Support are simply exercising their democratic right to see their children forced to live mean, pinched lives?

Are the 60% of the population of Britain reflected in recent opinion polls who think the world their children will have to live in will be even worse than at present, intent on using their freedom and their democratic right to fabricate such a world for their children?

These are really silly questions. Obviously the impoverished, the unemployed, the homeless, and the millions of workers performing degrading and low-paid work along with the millions of elderly people and the sick and infirm, in fact all whose lives are demeaned because of denial or the frustration of their reasonable expectations would prefer things to be different.

If our vaunted democracy is an effective instrument for the solution of our problems then those we cited, the people whose lives are blighted by one or more aspects of poverty, can rejoice that following the 1st of May of this year, at latest, their problems are over! Surely no one who has the the right and the democratic means to abolish the conditions which restrict and degrade them, which distracts in every possible way from their full enjoyment of life, will deliberately vote for the continuation of their misery!

Unfortunately, what is called freedom and democracy in the present form of society does not empower the overwhelming majority of people to resolve their poverty problems. The freedom and democracy that men and women killed and died for has always been an illusion conjured up by the political agents of capitalism and the hired hacks of the media. The fact is that our democratic rights’ are largely limited to our right to vote in elections.

Potentially this is an invaluable right and one that is denied to people is some countries. However, while we have this most important democratic right we are at present just as impotent when it comes to resolving our social problems as are workers in countries that do not enjoy our 'democratic rights’.

The freedom to vote of itself is not democracy; real democracy includes the right of every human being to the material basis of a full and happy life. What we currently have is only part of the democratic equation but it is vital insofar as we can use it to complete that equation.

What you are being offered
Let us put the question directly to you, the reader: assuming that like most people your life is restricted by one or more social problems — which are essentially poverty problems originating in your position as a member of the working class — do you really believe that you can change your condition by voting for any of the three parties that, realistically, have any chance of wielding political influence in the next parliament?

If you think so then you have not been listening to the politicians. Tories, New Labour and Liberal Democrats are in agreement with regard to what is needed to tackle the grim social problems facing Britain today: more investment in the public services. This, of course, is an oversimplification but it is true that in capitalist society money is the essential mechanism for movement. The source of public funding is, of course, taxation which, however it is presented, is ultimately a charge on capital and in today’s world of multi-national capitalism high taxation can result in job losses and the need for even more money to be paid out to increased numbers of unemployed.

With the exception of the Lib-Dems, whose poor electoral fortunes can allow them to be extravagant to the tune of an extra penny in the pound on income tax, specifically designed to improve the educational quality of ‘British’ wage-slaves, both New Labour and the Tories claim that it is not their intention to impose tax increases on a loot-satiated British capitalism. The intention of the three main political parties is to encourage investment in jobs primarily as the means of lowering public costs by reducing the bill for unemployment benefit and increasing workers’ national insurance contributions to the Exchequer.

The down-side of such a policy is that it is being universally pursued throughout all the nations of world capitalism, indeed, the viciously competitive ‘job creation’ market now requires the expenditure of vast sums of public money (which off-sets economies elsewhere in the system). More relevant to the working class is the fact that wage labour is a commodity and, like any other component of the profit system, is most attractive when it is cheap!

World conditions
Government ministers, like Major and his cabinet colleagues today, are quick to accept credit for perceived economic improvements. The implications of this claim, which is never questioned by the media ‘experts’, is that governments can exercise control over economic affairs — which, of course is the basis of a political party’s claim on the voter.

But if governments can control the economy, if they can effect improvement, then, conversely, they must be accountable for the endless economic problems that bedevil capitalism! But when capitalism is in crisis, when poverty is aggravated by mass unemployment and its chain reaction throughout the economy, governments of all political hues are quick to disclaim responsibility and argue that the problems arise from ‘world conditions’!

Effectively, then, when you vote for a political party that accepts capitalism you are placing your trust in capitalism which, in turn, means that your hopes for the future are dependent on the vicissitudes of a system of economic anarchy that is patently outside the control even of the capitalist class.

The bad news is that, with the exception of the Socialist Party who are running candidates only in five constituencies, every other party contesting the forthcoming elections stand for capitalism. The almost identical policies of New Labour and the Tories is a reflection of the fact that, while New Labour ar favourites, either may have to face up to the reality of government within the restraints of capitalism. Among the others are a selection of ‘socialists’, from the various Trotskyist factions to Scargill’s re-incarnation of the Labour Party. None of these latter parties or organisations will offer a real alternative to capitalism ; what they will present are various re-hashes of the old, failed reformist policies which take no account whatsoever of the realities of the present economic system.

For the present, our role in the elections is that of making more people aware that there is an alternative to capitalism; aware that they can use the limited democracy available to bring about a democratic revolution that will sweep away capitalism and introduce a system in which the resources of society will be owned in common and used solely to provide the goods and services that people require.

That is what we mean by Socialism: the institution of a society that will not be inhibited by the stupendous waste associated with the extraction of profit for a few from the productive and distributive process. The concept of cost will be a thing of the past and the idea that people should endure poverty in any shape or form simply to ensure that a relatively small minority of parasites can amass wealth far beyond what they could consume in a hundred lifetimes, will become an incredulous legend.

Socialism requires thinking about; it is a pre-eminently logical approach to the organisation of our affairs. But from within the madhouse of capitalism, where it is reasonable for people to starve to death while food is destroyed to preserve prices and profits, the idea of the world's resources being used in the service of humanity as a whole may, initially, be hard to comprehend.

The impending election does offer us real choice we can, by voting for any of the parties that favour capitalism, continue to endorse the lunacy of a system that demeans and degrades most people or we can consider if Socialism offers a credible alternative. If you have had enough of capitalism, if you want a change to real democracy, then you must join us to ensure that next time you have a democratic choice.
Richard Montague