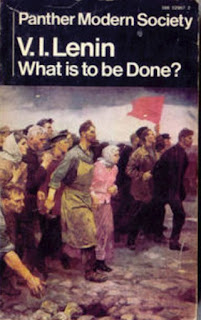 Book Review the July 1970 issue of the Socialist Standard

Lenin's What Is To Be Done? (Panther Modern Society)

This work by Lenin, running to about 60,000 words, was written in 1901-2, at a time when the party led by him (which in 1917 obtained power in Russia and changed its name to Communist Party), was still one of several factions in the Russian social-democratic movement.

It was written immediately after an unsuccessful conference held in Geneva in 1901, called to unite the factions into a single party and was followed by a period of six years in which Lenin's Bolsheviks and the rival Mensheviks struggled for control of the Social-Democratic Labour Party. It ended with the expulsion of the Mensheviks and the formation of two separate parties.

What is to be Done? was printed in English in the nineteen thirties (published by Martin Lawrence) and also as part of volume 2 of Lenin's Selected Works (published by Lawrence and Wishart). A new translation was published in 1963 by Oxford University Press and a paper-back edition has now been issued by Panther Books (240p. 4s.). The paper-back edition has the advantage of an Index, and an appendix of explanatory notes. It differs from the pre-war edition (apart from the new translation) by the insertion of two passages which were added by Lenin in a later Russian edition and by the omission of a number of passages which the present translators consider would be obscuring rather than elucidating. It is difficult in some instances to understand how they reached this conclusion.

The new edition also has an Introduction by one of the translators, S. V. Utechin, which usefully summarises Lenin's somewhat involved text. Lenin's purpose in What is to be Done? was to explain and justify his ideas on organisation, strategy and tactics for the conquest of power against the views of his opponents, particularly the Mensheviks. (The terms 'economists' and 'economism' frequently used by Lenin refer to his opponents and their theories).

Lenin pointed out that, unlike some earlier controversies between the Russian factions which had been entirely internal to Russia, the quarrel in Russia in 1901 was part of the international dispute in the social-democratic parties, between those who claimed to be adhering to the theories of Marx and the 'Revisionists', led by the German social-democrat Bernstein, who urged that the movement should go over to the 'practical' work of reforming capitalism, by collaborating with democratic capitalist parties and participating in capitalist governments; that it should, in short, abandon revolution and become reformist and gradualist.

In Chapter 1, Lenin argued that the Mensheviks' demand for 'freedom of criticism' was a cover under which they were attacking basic socialist principles. Against this Lenin insisted that a political party, if it is to be effective, must have a sound and clearly defined theoretical basis. He was not impressed by the argument (so familiar in Britain) that it was more important to provide a broad umbrella under which all varieties of 'socialist' thought could keep up a show of being united.

He quoted at the opening of his preface something Lassalle had written to Marx in 1852: –


"Party struggles give a party strength and life . . . the best proof of the weakness of a party is its diffuseness and the blurring of clearly defined borders . . . a party becomes strongest by purging itself."

It is interesting to note that Lenin in 1901 shared the mistakenly high opinion Engels had in 1874 about the German Social Democratic Party. (In the original English edition a lengthy passage from Engels' Preface to The Peasant War in Germany was quoted by Lenin to show Engels' views. This passage is one of these left out of the new paper-back edition). Lenin was blind to the fact that the German Party's attempt to combine a socialist objective with a programme of popular immediate demands had inevitably undermined it and paved the way for Revisionism and reformism. In Chapter II and III Lenin criticised the school of thought which saw the future as a development of socialist theory out of spontaneous explosions of peasant discontent and the struggles of trade unions. He accepted that the unions had become more effective with experience but he argued that the growth of "trade union consciousness" did not produce socialist theory. In their unions, he wrote: –

"the workers did not have, nor was it possible for them to have an awareness of the irreconcilable contradictions of their interests with the whole modern political and social scene, that is. they did not yet possess Social-Democratic consciousness".

According to Lenin this "social-democratic consciousness", the theory of Socialism had to come from "the educated representatives of the 'propertied classes – the intelligentsia". He wrote: –

"The founders of modern scientific Socialism, Marx and Engels. themselves belonged by social status to the bourgeois intelligentsia".

To illustrate his theme he pointed to the difference between the English trade union official, Robert Knight, who did good work organising the boilermakers for concrete gains on the industrial field, and Wilhelm Liebknecht, who engaged more in "the revolutionary explanation of the whole of modern society" (the references to Knight are omitted from the paper-back edition).

Lenin was only partly right about this and drew a wrong conclusion. In order to be effective the trade unions had to work with the human material available, which meant that they had to consist of workers who were not (and mostly are not) Socialists and who were not concerned with deeper social questions but primarily with immediate issues of wages and working conditions of the particular group of workers in each union.

These conditions impede and delay the development of a Socialist outlook in the unions as organisations but do not prevent members individually from coming to full class-consciousness. (Two years after Lenin wrote What is to be Done? the Socialist Party of Great Britain Manifesto remarked of the trade unions that "in many cases a grasp of the class antagonisms necessarily arising from such conditions were obtained by the more virile and intelligent of their members").

While it is true that the advantages of education and leisure enabled men such as Marx and Engels to study and formulate in detail a comprehensive theory of Socialism it is not true that it is beyond the capacity of workers independently to move towards the same kind of theoretical comprehension, nor is it beyond the capacity of the working class as a whole to understand the broad outlines of Socialist theory.

Lenin covered himself on this by arguing that when workers do participate in working out Socialist theory they do so "not as workers but as theorists of Socialism". (Footnote on Page 89). He mentioned Proudhon and Weitling; there are many other examples of workers who helped to develop Socialist theory.

The London Communist Club was formed in 1840 by three German workers who had been active in the revolutionary movement and had been expelled from France in 1830 for participating in the Blanquist conspiracy. The three founders of the Club were Karl Schapper, a proof reader, Heinrich Bauer, a shoemaker, and Joseph Moll, a matchmaker.

This club, which had become the centre of revolutionary activity decided at a conference with the German Workingmen's Club of Brussels, in 1847, to invite Marx and Engels to prepare the Communist Manifesto.

Another example is Karl Pfaender, a journeyman printer, who was prominent in the Communist League before he encountered the views of Marx. This was also true of Frederick Lessner, a tailor. Some of the workingmen active in the Chartist movement had also developed communist views, among them J. F. Bray, believed to have been a journeyman printer, and of course Robert Owen, originally a mill worker.

Incidentally where did Marx and Engels learn their Socialism? Partly, at least, from inside the Chartist Movement and from German journeymen workmen; before then they were mainly concerned with philosophy and anti-religious ideas.

Lenin never accepted the possibility of working-class understanding of Socialism, hence his jibe that if Socialism had to wait for the intellectual development of the people it would have to wait for 500 years.

It was in line with this attitude that he wanted in Russia, not a political party of the working class, but a party "chiefly of persons engaged in revolutionary activities as a profession".

There was to be no democratic control from below. Instead there was to be "full comradely trust among revolutionaries". (Later on, when the "Comrades" were shooting each other they must have remembered this).

The purpose of this organisation was "preparing for, setting the time for, and carrying out the armed insurrection of the whole people".

Lenin, in What is to be Done? used various arguments in support of this policy of insurrection. Elsewhere he quoted something Engels had written 1851-2 in Germany: Revolution Counter Revolution. (See Marxism & Insurrection written by Lenin in September 1917. Vol. 6 of Selected Works pages 218, 291 & 581. Lenin attributed this quotation to Marx but it was later shown that Revolution and Counter Revolution had been written by Engels).

Writing there in 1851-2 Engels had discussed "the art of insurrection" (Chapter XVII of Revolution and Counter Revolution), but later on, in 1895, he pointed out how rare it was for insurrection to succeed even in the early days. He argued that success depend on the government armed forces "integrating", and went on: –
"The rebellion of the old style street fight behind barricades, which up to 1848 gave the final decision, has come antiquated". (Engels' 1895 Introduction to The Class Struggles in France 1848-1850)

Engels's estimate of the only conditions under which insurrection could succeed was to be confirmed by Trotsky in The Lessons of October 1917, in which he dealt with the way the Communists got power in Russia:

"The first necessity was an army that did not want to fight. The whole course of the revolution would have changed, if at the moment of the revolution there had not been a broken and discontented peasant army of many millions . . . " (Labour Publishing Co edition 1925 Page 167).

S. V. Utechin in his introduction to What is to be Done? argues that Lenin's tactics and theories of organisation were influenced only to a minor degree by "scattered ideas contained in those early writings of Marx" (p.42) and that in the main they derived from the earlier Russian revolutionary movement.


An Edgar Hardcastle archive has recently been started up at the Marxist Internet Archive.