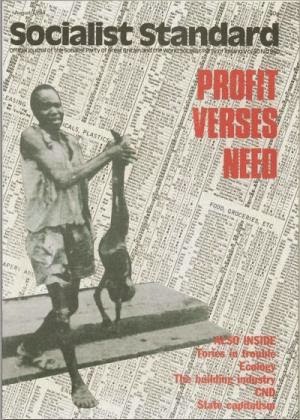 From the August 1984 issue of the Socialist Standard

A baby has been defined as a loud noise at one end and little sense of responsibility at the other. However that may be, it is certain that, give or take the odd precocity, the newly-born are not customarily noted for political and economic understanding. Were it otherwise, the year 1929—that of the Wall Street crash—might have made a sight more of an impression on me that, in fact, it did. As it turned out, the only crash that assailed my infant ears was that of the decaying ceiling of the third-floor back room in the borough of Lewisham, which was to be my home for the first few years of my life. (I believe this inelegant apartment later received the undiscriminating attentions of Adolf Hitler, who, it has to be admitted, knew a thing or two about slum-clearance.)

Suffice it to say, then, that my earliest years were, ceiling notwithstanding, as relatively cushioned as caring, if impoverished, parents could make them. (My father, who had suffered serious injuries at Ypres in 1914, was, in recognition of his services to his country, unemployed.) However, as hitherto indicated, my innocence in all these matters was absolute. And this, surely, is the point. We are, each of us, born into a world not of our own choosing. The conditions into which we are thus involuntarily thrust depend not, then, on ourselves (how can they?) or on some mystical preordination, but rather on the material circumstances of our parents and their immediate social condition. At birth a prince is as clean a slate as a pauper. Sooner or later, however, it is the pauper who is the more likely to start asking the awkward questions. So it was with me.

Well, to be strictly accurate, it was my father who put the questions and I was expected to struggle for the answers. For example, he would emerge from behind a cloud of cheap tobacco smoke to ask: "Why is it, do you suppose, that whereas the shoe-shops are bursting with children's shoes, there are thousands of children running about in the streets of London barefoot or ill-shod?" (The same type of question could be asked in connection with the Common Market food surpluses in our own times.) Anyway, I soon became familiar with the idea of capitalism as a generator of crises — the boom/slump cycle. Then there was gold: we had a lot of fun with this one. Not that we possessed any ourselves apart from my mother's wedding ring. But at least I early understood the difference between intrinsic and commodity value. For while gold is rustless, conducts heat and electricity, fills (some) teeth, and can be used to decorate books, fingers and religious houses, these qualities and uses can hardly account for its current (15 June 1984) mark-up of three hundred and seventy-five dollars an ounce. Or for the fact that, having been quarried and mined from the earth at the expense of colossal human hardship it is promptly buried again in places like Fort Knox and the Bank of England. Such idiocies serve to remind us of the fundamentally irrational nature of the capitalist system. No wonder that the logic of socialism is such anathema to its—capitalism's—practitioners.

So where did this paternal tutelage take me? Well, er, the Labour Party, would you believe it? Anyway, the least said the better, I think! A few years and much frustration later saw me out of the "broad church" charade and, er, into the Communist Party. Despite what I found to be a lack of trust within the Party, and notwithstanding, among many other anomalies, what I then interpreted as an incomprehensible backsliding which went under the euphemistic title of "Eurocommunism", I stuck it out with the CPGB. Until, that is, I made the acquaintance of an old anarchist with whom I played a few games of chess. I quickly discovered that my contempt for, and rejection of, the capitalist system was more than matched by his own. One evening he handed me some old leaflets and pamphlets, together with some back numbers of the Socialist Standard. My heart sank! As if I hadn't choked on enough political "literature" in my time!

Eventually I got round to reading some of it. At first I treated it as I might have done a typical Labour Party leaflet. I gradually came to realise, however, and almost unconsciously, that this was different. Nobody was trying to con me with hyperbole or waffle or vague promises impossible of fulfillment. I was getting socialism straight. It worked on me like a purgative. The sheer futility of labourism; the vicious obscenities of Soviet-style capitalism; all this was washed out of my system once and for all. Hitherto I had read quite widely: Marx, of course, and Engels; Robert Tressell's The Ragged Trousered Philanthropists; Zola's Germinal; the poetry of Shelley (only latterly his political prose writings) and Wilfred Owen. I had dipped into William Morris, Jack London and George Orwell.

All I needed, it is now clear to me, was a corrective — a catalyst. A much read, tea-stained fistful of pamphlets had provided it. Waters muddied by the empty platitudes of pseudo-socialists and phoney "communists" rapidly cleared. There remains a great deal to learn but at least it is now possible to build on a firm foundation. However, I have to confess that, had it not been for my own obstinacy, I could have provided myself with this foundation long ago — before I joined Attlee's Labour Party, in fact.

That same father I have spoken of, long since dead, I'm afraid, occasionally referred to the Socialist Party of Great Britain and its message. He had evidently heard some of the Party's speakers as they threw out their challenging and abrasive truths from their (at the time, more numerous) open-air platforms in London. "These people" he would say "are the real socialists in this country." Well, I could hardly be expected to take for gospel everything the old boy told me, could I?