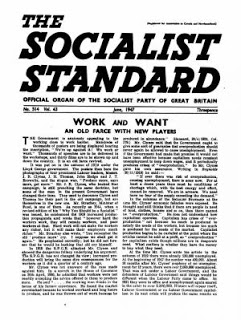 The advent of the 21st birthday of the Princess Elizabeth, heir presumptive to the throne of England, has, as is usual on such occasions, been accompanied by great pomp and ceremony.

That this ceremony and celebration took place in South Africa, where the young woman was “strengthening the bonds of the Empire," in no way prevented us from knowing all the details, as the newspapers of this country blossomed forth in an ecstacy of adulatory and servile slush.

The editorials of our national daily newspapers (except the Daily Worker, of which more anon) have vied with each other in a nauseating exhibition of sycophantic flattery, reiterating the assurance of the love and respect of her loyal and humble subjects.

Mr. Attlee and his colleagues also felt impelled to join the adulatory chorus, Attlee describing himself as Her Royal Highness's humble and obedient servant. As well as the spate of words other and more material presents were showered on the Princess, including many thousands of pounds in cheques and jewellery.

Much emphasis was laid on how good, how gracious, how wise, Elizabeth and the rest of the Royal Family are and what a great gulf separates them from the common run of people. Gods, in fact, among the mortals. The working class of this country, however, wasn't greatly impressed and viewed all this to-do with a tolerant if cynical eye, only really sitting up and taking notice when the “Evening News'' (21/4/47) for example published the news that Elizabeth received, on attaining her majority, an increase in her emoluments to £15,000 per annum, and also that her royal father receives from a grateful State an official annuity of £410,000 in addition to his private income.

The general reaction of the workers to this item of information was one of dissatisfaction and resentment and it was widely argued that, as monarchs performed no useful task, monarchy could well be abolished and that, if this were done, the huge amounts of money saved would benefit the working class. This, of course, is not the case. It is the old fallacious argument, so often used by reformists, that goods or money, gained or saved by the State will ultimately benefit, or relieve the burden on the working class. It shows a complete misunderstanding of the Capitalist system of society and of the position of the working class within it.

The cost of maintaining the Royal Family is a charge upon the Capitalist class of this country, for whom the Royal family perform a useful function.

This useful function consists of being the figureheads of the State, of stressing the distinctions of caste and class, of upholding the monstrous deception that the ruling class are of finer clay and of higher intellect and instinct than the working class, of keeping alive and virile the emotions of nationalism, patriotism and tradition and of providing the leading figures in such things as State poppy-shows and processions.

For that task performed well the British Capitalist class is prepared to pay handsomely, as they consider that British Capitalism—up to this stage at all events— functions most effectively through a democratic form of administration with a monarchy at its head.

Hence, they are prepared to subsidise monarchs at present, but just so soon as monarchs become an unnecessary nuisance or a drag on British Capitalism, then the Capitalist class will soon see that they get what any other unnecessary or unsatisfactory employees get, the sack.

The absurdity of the contention that the cost of maintaining monarchs and their families is in any way borne by the working class is very easily shown.

Monarchs or no monarchs, the working class only receive back from the sale of their energies sufficient to keep and perpetuate them as an efficient labour force.

The worker should know, by bitter experience, that his wages at all times are based on the cost of living, i.e., the lowest amount necessary to produce, maintain and reproduce his power to labour and that, subject to some fluctuation of supply and demand, he gets no more than that, whether or not huge sums of money are paid to monarchs, politicians, prelates or any other servants of Capitalism. However, it is interesting to note that the Daily Worker (21/4/47) goes a little further in muddleheaded thinking.

Declaiming against this “monster monarchist build-up'' it attacks the educational, political and intellectual qualifications of Princess Elizabeth for “a great public office," and goes on to say “The institution of monarchy is an anachronism in the middle of the 20th century," concluding with this gem, “The dignity of a modern State can only be met when its titular head is chosen from among its most eminent citizens."

So there we have it.

In a few self-chosen words the fundamental misconception of the issue (from a working class standpoint) is shown by these piecans who pose as working class champions.

Their objection, obviously, is not to kings or figureheads as such, but to the “closed shop" in monarchy and to the title.

They would apparently be perfectly satisfied if the function were performed by a (working class?) leader, Harry Pollitt perhaps, and if the designation were altered. Maybe Marshal or Generalissimo would meet the case.

It is not the abolition of kings nor the better education or political skill of their heirs, that will solve working class problems, nor is it their replacement by “leaders" or “heads," working class or otherwise. The cause of workers' problems is Capitalism itself and not until workers understand this and organise together to abolish Capitalism and establish Socialism, can these problems be solved.

To abolish monarchs leaves Capitalism and all its evils intact but to abolish Capitalism disposes with monarchs at the same time.

Writing in the Medical World (quoted in Burton Daily Mail, 6/5/47) Dr. Franklin Bicknell, physician and dietician, has things to say about our food. “ We are the worst-fed nation in Western Europe."

“The forty-hour week, no Saturday work, shops closing for over an hour at mid-day, the lower output of work, are all the necessary though unconscious results of starvation, forcing the worker to conserve his energy."
“The only way this vicious circle can be broken is by greatly increasing our food. Just yelping for the Dunkirk spirit shows a total lack of all knowledge of the country's starved condition. It is just foolishness."