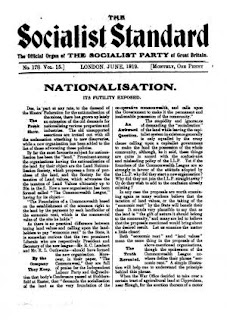 Editorial from the June 1919 issue of the Socialist Standard

So, the bobbies have funked it. We are not, for the present, at all events, to be treated to the comic spectacle of strike processions of bluebottles being shepherded through the streets by their own blacklegs, the "specials." The world has lost an entertainment.

Of course, we are not blind to the difficulties of the policemen's situation. Their bosses had got the strangle-hold on them. By the simple expedient of stopping sixpence in the pound of their wages, confiscating their fees for the service of summons, and in other dubious ways, the capitalists provide a pensions fund at poor Booby's expense. The loss of this pension, together with the "sack," is the first threat the bosses hold over the bobbies' heads. Bobby is a man with no other trade in his hands in the vast majority of cases. So the threat of losing a regular job has special terrors for him. In addition, the loss of his pension—a pension designed, as most pensions are, to get a disciplinary grip upon the subject which probably no other expedient possible in a "free country" could afford, is a prospect requiring a quite uncommon type of mind to withstand.

The bosses, of course, played the game for all it was worth. They said they were flooded with applications from soldiers and ex-soldiers to take the policemen's jobs. They also talked loudly but vaguely about the arrangements that were being made to meet Buttons' grievances. It was the old, old game of bribe some and threaten others—the game played from the beginning to the end of the recruiting for the war—the game played to kill the demobilisation trouble after the Armistice. As, in the earlier case, the single and the young were promised jobs and preferment if they enlisted, and the married and the older ones were threatened that they would have to go if they did shove the others in; as, later, the older men were promised early demobilisation if they kept quiet, and detention till the last if they did not, while the younger men were soothed with extra money, so the older policemen were threatened more particularly with the loss of all that was so nearly won, while the younger men were soothed with promised improvements in the longer road before them.

Meanwhile the policemen played their cards just about as badly as they could. They have climbed down under threats—than which hardly anything could more completely have exposed their weakness and fear. Added to this they have climbed down before their bosses had committed themselves to the vaguely talked-of concessions, and in face of this confession of funk and weakness those concessions are going to shrivel up considerably. The bosses have found out all they wanted to know—that the reward they are offering their bulldogs is sufficient to secure their allegiance to their odious duties. If they dare not decline those duties for themselves they can never dare to decline to perform them for others. So, when labour troubles come Bobby will not, the masters are assured, be a trade unionist, and they have secured this, thanks to their cunning, at about the lowest possible price.

The Daily Chronicle in its issue of June 2 tries to point out to the policemen why the Government can never recognise the Police Union, and, as usual, it reveals only half the truth. "The police exist," our contemporary says, "to support the State. That is what they are for. . . They cannot strike and agitate, or even become public politicians, without ceasing to be policemen." Which is true enough as far as it goes, but does not dispose of the not unimportant fact that the policeman is so essentially a member of the exploited class that he cannot get his admitted grievances redressed until he threatens to cease to be a policeman.

The more important matter, however, is the statement that a policeman is only such to support the State. The complement of this half truth is, of course, that the State is only an instrument for keeping the workers in subjection. Directly this position is realised it becomes obvious how far the police are from getting recognition for any police union that could possibly link them with the unions of the industrial world. The position of police force affiliated with the industrial trade unions would indeed be a tragic one in a time of strife. This the bosses have sense enough to perceive, if the underlings have not. And it is for this reason rather than that they are afraid of being dictated to by the men that the Government will never recognise the Police Union.

It was probably a lie that the police authorities are inundated with blackleg applications from soldiers, but the capitalists have a deep pocket, and, as long as their control of the instrument of the State lasts will have no serious difficulty in obtaining men who will carry out their behests. It is simply a question of the price.

The only thing that can deliver the policeman—as the rest of us— from the tyranny of his tormentors is for the working class to assume control of the State, and to use its forces, including the police, to abolish capitalism and establish the Socialist Commonwealth.

Weekly Bulletin of The Socialist Party of Great Britain (30)

Welcome to the 30th of our weekly bulletins to keep you informed of changes at Socialist Party of Great Britain @ MySpace.

"Governments are not social organizations that represent all people. They are class institutions. They do the work of the class that owns and rules." J.A. McDonald, Western Socialist, 1960.