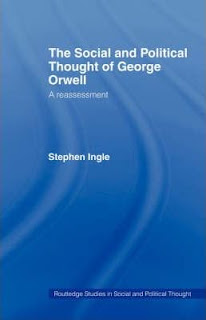 Book Review from the June 2006 issue of the Socialist Standard

The Social and Political Thought of George Orwell: A reassessment. By Stephen Ingle. Routledge. 2006. £65 (hardback)

Despite the title this is more a work of literary criticism than political theory. But since Orwell wrote mainly on political and social subjects the two are intertwined. Orwell considered himself a socialist and was briefly a member of the ILP in 1938. Later, he wrote for the left-wing weekly Tribune and was a declared supporter of the post-war Labour government.

In fact one of the issues Ingle discusses is whether Orwell should be described as a "Trotskyite" or as a "Tribunite". He opts for a third choice: "ethical socialist". Although we wouldn't regard him as a socialist in our sense, he was always clear, at a time when few others besides ourselves were arguing this, that Russia had nothing to do with socialism. Which was why the Russia-lovers called him a "Trotskyite" and why his fear of being assassinated was not entirely groundless.

Two of Orwell's works in particular have been appreciated by socialists. Homage to Catalonia, an account of events in Barcelona in 1936 and 1937 when workers took over the running of the city and the subsequent suppression of this by the so-called "Communists". And Animal Farm, a brilliant satire on Bolshevism (including Trotskyism).

The main book for which Orwell is known is Nineteen Eighty Four. This paints a horrifying picture of a world in which the evolution towards a totalitarian state-capitalism (which, in the 1940s, many to the left of the Communist Party thought was under way) has been completed. It was mainly aimed at those left-wing intellectuals who thought that Russia was "progressive" and deserved support. Inevitably, and whatever Orwell may have intended, it was used by the West as an ideological weapon in the Cold War.

Ingle mentions that Orwell and Aldous Huxley offered contrasting views on how class society might evolve. It has to be said that, in the event, Huxley in his Brave New World turned out to be more prescient than Orwell. Capitalism has survived not by treating workers more and more brutally, but by making them think they are happy - happy slaves who don't even realise they are slaves rather than down-trodden proles. 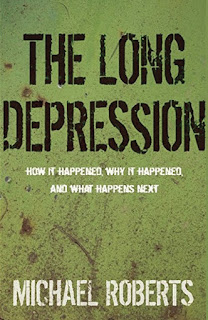 Book Review from the September 2017 issue of the Socialist Standard
'The Long Depression'. By Michael Roberts. (Haymarket Books. 2016)
There is a tendency within some flavours of Marxism that has been said to have correctly predicted 6 of the last 3 recessions. The temptation to rely on inevitable crisis and the collapse of capitalism has a silvery allure for some. This book does not join that chorus, but it does seek to make crises of capitalism subject to (at least theoretically) predictable laws.


Roberts positions himself as a heterodox within the already heterodox school of Marxian economists. He sees Marx’s examination of the tendency for the rate of profit to decline as the root cause of recessions and depressions (he defines a depression as: 'countries growing at well below their previous rate of output . . . and below their long term average' and he notes the usual definition of a recession is: “two consecutive quarters in real GDP”).
He sees a potential explanation for Kondratiev long waves in his model:

'Depressions…appear when there is a conjunction of downward phases in cycles of capitalism. Every depression has come when the cycle in clusters of innovation have matured and become “saturated”; when world production and commodity prices enter a downward phase, namely, that inflation is slowing and turns into deflation; and above all, when the cycle of profitability is in its downward phase. The conjunction of these different cycles only happens every sixty to seventy years.'

Following Marx, he defines the rate of profit as the surplus value (S) divided by variable capital, wages (V) plus constant capital, the value of machines, tools and ingredients (C). He notes that the tendency is for the organic composition of capital (the ratio of C/V) to increase: that is for machinery and tools to replace human labour, as capitalists compete to improve the productivity of the labour they employ. This then reduces surplus value, leading to a withdrawal of investment.

'The continual process of an upward cycle in profitability –as the rate of surplus value rises faster than the organic composition, in turn replaced by a downward cycle as the law as such gains ascendancy –explains the cyclical nature of capitalist accumulation'.

The problem with this approach is that it lacks explanatory power for why crises involve stranded capital. In his chapter on the rate of profit, Marx discusses how the falling rate of profit is compatible with ongoing growth in the mass of profits (due to expansion, investment, etc.) This is before he identifies the counteracting tendencies (increasing intensity of exploitation; depressing wages below the value of labour power; cheapening elements of constant capital; relative overpopulation; foreign trade; and the increase of stock capital). Roberts does address these counteracting tendencies, but sees crisis arising out of them temporarily being overwhelmed by the rising organic composition of capital.
If it were a falling rate of profit alone, merger and expansion would be sufficient to escape and renew growth for a while longer.
The Socialist Party has tended towards the view that it is disproportionate investment and expansion of production that causes crises and slumps. There are strict conditions to enable capital expansion, accumulation and reproduction going on, requiring all the different branches of industry to broadly grow together. Since each capital is seeking to grow at the fastest possible pace, driven largely by the expectation of profit, it becomes inevitable that one sector over-invests and has its reproduction choked by relative under-investment either in consumption or in key components.
This view of crisis means they are not governed by an underlying regular process, but by an ever increasingly likelihood of accident and happenstance. Even a state-run economy could not overcome these tendencies, since even if it were possible to plan every commodity exchange in such a way as to provide growth: accidents, happenstance and misjudgement would still mean inevitable crises.
Roberts provides a wealth of empirical data showing long run trends towards a declining general rate of profit. He has debated with Paul Mattick Jr. whether official statistics can meaningfully be mapped onto Marx's categories ( Link -- this is worth reading in itself). We agree that they cannot least because of the level of misrepresentation and manipulation that goes into formulating them.
At the least though, if the measures show distinct trends, that is useful for trying to read the developments of the economy. His tables showing all the US recessions since the mid 19th century provide a salutary reminder of how frequent and endemic they are: indeed, we would agree that they are not just inevitable, but essential to capitalism’s ongoing existence, as they are followed by the clearing of bad investments and creation of new room for growth in the economy.
Where we would certainly agree with Roberts is that the only way within capitalism, ultimately, to exit a crisis is the destruction of the value of capital; and, further, that capitalism will eventually find new scope to grow (although at what human cost in misery?) unless the working class take a conscious political choice to abolish capitalism: that is the only way in which it will collapse.
Pik Smeet

Obituary from the August 2012 issue of the Socialist Standard

We are saddened to have to report the death in June of comrade Ken Smith in Cheltenham at the age of 89. Ken first joined the Socialist Party in London in 1944 after moving in anarchist anti-war circles. He had been conscripted but, in his own words, “was invited to leave the Army after twelve-month’s service and a jail sentence for mutiny.” He worked at various jobs and ran a number of businesses. (He was a pioneer of Sunday trading when it was not yet legal).

Over the years Ken was in and out of the Party for various reasons, including a period when he lived in France. In the 1940s and 1950s he was active in the old Fulham branch. Thirty years later he was in Bristol branch and hosted a number of Party Summer Schools in his place at Stow Hill in Gloucestershire, the part of the country he hailed from.

In retirement, he published two books Free is Cheaper (1988) and The Survival of the Weakest (1994). He also wrote for the Socialist Standard. Free is Cheaper is an attack on the waste of the market system, making the case that a socialist society, in which there would be no need for money, would use up much fewer resources. Its claim in passing that capitalism was not a necessary historical development raised some eyebrows but, then, Ken was anything but conventional. His other, less successful book argued that the agent for the change to socialism would not be, as traditionally assumed, the working-class movement but rather the Green and environmentalist movement.
Posted by Imposs1904 at 1:34 AM No comments: