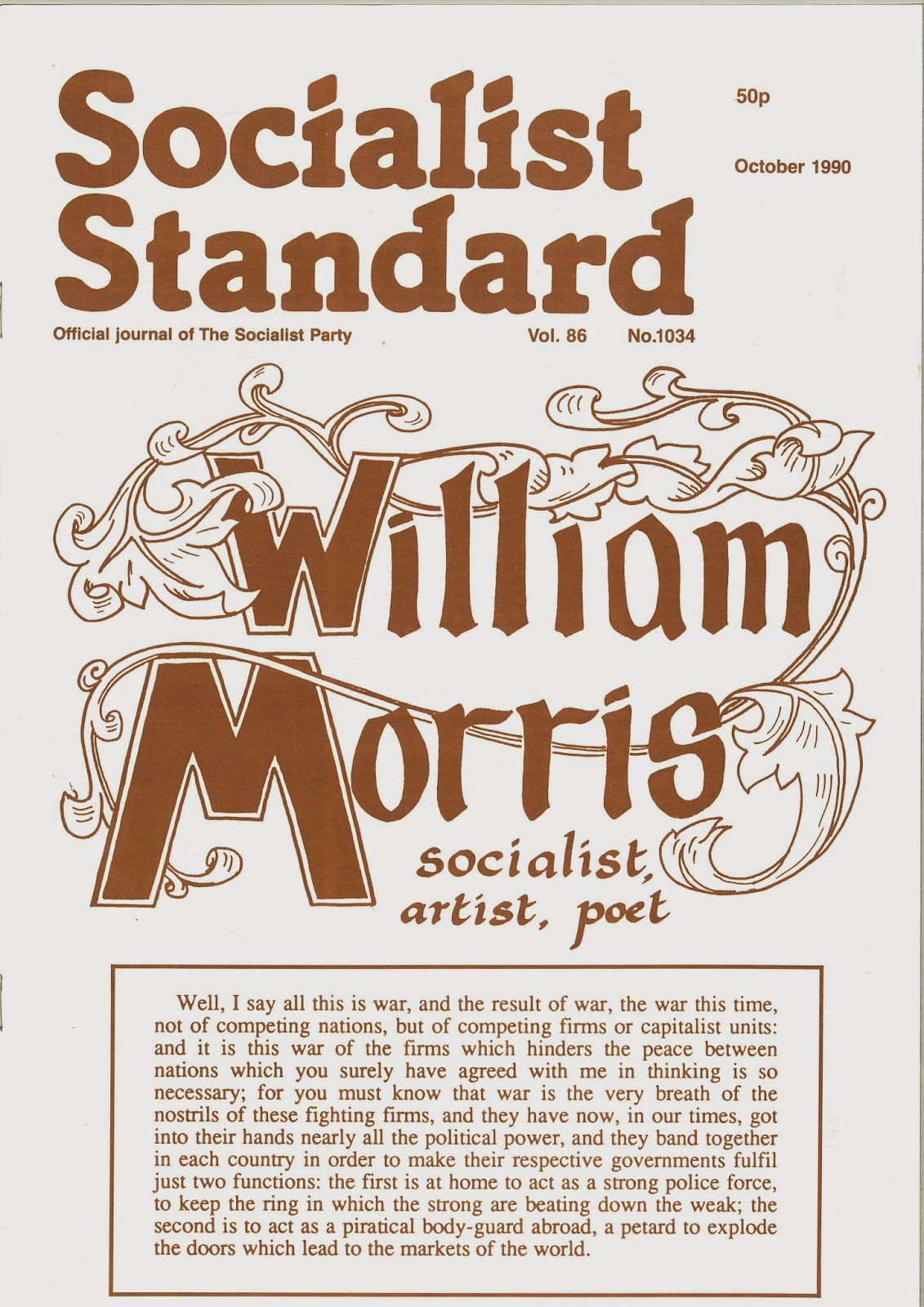 From the October 1990 issue of the Socialist Standard

Morris's News From Nowhere is a speculative work in the same genre as More's Utopia. It challenges us to reject mere piecemeal reforms and to aim for a real community of co-operation. Some would call him Utopian, both for rejecting reformism - what E.P. Thompson calls his "purism" - and for speculating as to what such a socialist/communist society might be like.

However, Engels, contrasting Utopian Socialists to "Scientific Socialists" focussed on the point that the latter base their argument on class interests. Utopian Socialists lived at a time when the working class was emerging as a new class "quite incapable of independent political action . . . an oppressed suffering order". Marxists however recognize the working class as a "revolutionary class", capable of changing society.

The Utopians saw society as presenting "nothing but wrongs; to remove these was the task of reason. It was necessary . . . to discover a new and more perfect system of social order and to impose this upon society from without by propaganda" (Socialism: Utopian and Scientific). What is it that prevents Morris, with his capitalist background, his lack of experience of working class struggle, and the emphasis he gave to propaganda from being called a "Utopian Socialist"?

How the change could come
In News From Nowhere, his most widely-read work, Morris set out in detail how, in 1890, he thought the "change" might come about. Central to his concept is his view that the new society is the outcome of working class struggle, based on awareness of class interests. Like Marx, he perceives the working class as a revolutionary class, not merely as "the oppressed". In some details - for instance, Trafalgar Square demonstrations attacked by soldiers and police - he reminds his readers of recent events, fresh to their memory.

The 1880s had been a period of recession - the Great Depression. Morris suggests that a major economic crisis, resulting in working class suffering and discontent, could help trigger revolution. In News From Nowhere there is a highly developed workers' industrial organisation -  the "Combined Workers". And, crucially, class-consciousness is enhanced by the economic crisis and the "spread of communistic theories". This led to the Resolution of the Combined Workers, effectively a demand for workers control, demanding that control of the "whole natural resources of the country" be handed over to the Combined Workers.

However, the workers' movement was not politically powerful and the government (first Liberal, later Conservative) decided to crush it. Extra soldiers were brought in and a militia was recruited, but the government "did not dare use them".

The media "blazed into the fury of frightened people", and leading businessmen put pressure on the government. In a state of siege, troops were used to massacre the (mostly) unarmed demonstrators in Trafalgar Square.

The workers arranged free distribution of food and created a new form of organisation - "a new network of workmen's associations". This was able to carry on the struggle even when the leaders of the movement (the Committee of Public Safety) were arrested, or, when free, active only as "a focus of opposition".

With the general strike ("a weapon stronger than street fighting") and impending civil war, there was also the "rapidly approaching breakdown of the whole system founded on the World Market and its supply". Two years of civil war followed and the working people were victorious. The soldiers had mostly joined them, and qualities of leadership and organisation were developed in the struggle.

. . . Or Could It?
In Morris's account of this imaginery struggle there are inconsistencies and somethings downright unbelievable. One is that the working-class, so class-conscious, so well-organised, should have only a few representatives in Parliament. Another is his view of the speedy effectiveness of the general strike: in 1926 workers found out that this could last longer than a few days and would not shake the system, as Morris suggested.

Then there is the suggestion that world capitalism could be brought, in such circumstances, to the point of collapse. In a serious economic crisis, mass strikes do not really hurt the employers much. It is the workers whose families are first to feel the pinch of hunger, even if the strikers do organise free food (as in the 1889 London Dock Strike). In a crisis, factories can be shut down while directors and shareholders play a waiting game till despair and distress force the workers back.

But there were historic precedents for some of the developments Morris suggested. The government's inability to use its troops at an early stage to crush the revolution is paralleled in Belfort Bax's comment on the fall of the Bastille, achieved with the support of the mutinous French Guard, showing the "eminent utility of popular 'force' if only applied at the right moment". (Bax, The French Revolution, 1890).

However, in News From Nowhere, Morris seems not to recognize the crucial importance for the working class of gaining control of the state and its administrative machinery. It seems that, if the soldiers had not come over to the revolution, the workers - poorly-armed, with no military training - would have gone into battle against trained, organised and well-equipped government forces. In real life, that would have been that.

When the time comes that the workers are determined to overthrow the capitalist system, they will only be able to do this if they have the political power to prevent the state's armed forces from being used to crush the revolution. That is why workers have to be organised politically. The state exists precisely to defend the interests of the owners of property in the last resort, against us and our movement.

In 1890, when News From Nowhere first came into print as a serial in Commonweal the League was splitting. Morris and other socialists could no longer work with the anarchists who had come to dominate the Socialist League. Some of these advocated "direct action", others terrorist methods - the so-called "propaganda by deed". All rejected political organisation and using parliament.

Yet, since 1884, the electorate was, overwhelmingly, working class. If. once united on a clear objective, the workers could organize themselves effectively in a political party, they could obtain control over the executive.

The League's failure served as a lesson for other Socialists. In his introduction to the American edition of Plekhanov's book, Anarchism and Socialism, Robert Rives La Monte made the point "every revolt from the Socialist Party in America, which is based on disgust with the fact that it is a 'pure and simple' political party of 'ballot-worshippers' is destined to repeat the history of the Socialist League", to land "in the quagmire of Anarchism". Plekhanov's book was important since it argued that "every class war is a political war".

To prevent a repitition of the League's failure, the Socialist Party of Great Britain's Declaration of Principles was explicit in asserting the necessity of political organisation and action.

A 'Quasi-Socialist Machinery'
The other significant trend at the time Morris wrote News From Nowhere was the birth of the "New Unionism". Whereas previously trade unions had represented mainly the (Liberal) "aristocracy of labour", the radical New Unions mobilised casual and low-paid workers. But along with New Unionism, workers were being encouraged towards what Morris called "palliatives". In Commonweal, in 1890, Morris wrote

The hope of the partial and vulgarised realisation of Socialism is now pressing on us . . . The whole set [of] opinion amongst those more or less touched by Socialism . . . is towards the New Trades' Unions and palliation. Men believe that they can wrest from the capitalists some portion of their privileged profits  . . . [but] I say for us to make Socialists is the business (Where Are We Now, in Political Writings of William Morris, ed. A.L. Morton)

Not that he thought it enough merely to "make Socialists". Later he wrote

I cannot fail to see that it is necessary somehow to get hold of the machine which has at its back the executive power of the country . . . And that the organisation and labour which will be necessary to effect that by means of the ballot box will be little indeed compared with what would be necessary to effect it by open revolt (in May Morris, Supplementary Volume II, pp. 350).

At the same time (1892) he was stating clearly his position on the Fabian, 'gas and water socialism', and the other partial demands:

rise of wages, shortening of hours of labour, better education etc., all these things are good, even in themselves, but unless they are used as steps towards equality of condition, the inconvenience they will cause to the capitalists will be met by changes in the markets, and in the methods of production, which will make the gains of the workers mere names. (Quoted in E.P Thompson's William Morris: Romantic to Revolutionary, revised edition, 1976, p.600).

Morris's yardstick for assessing the long-term benefit of welfare state or other Labourite nostrums for making capitalism less unacceptable was simply: would it help to educate the workers towards Socialism? He warned that social democratic measures could be seen as "ends in themselves", rather than as promoting and encouraging "a knowledge of the aims of socialism", and a longing "to build it about". He foresaw that capitalism might accept this "quasi-socialist machinery" and use it as a means of safeguarding the system, with "the workers better treated, better organized, helping to govern themselves, but with no more pretence to equality with the rich, nor any more hope for it than they have now". (Political Writings of William Morris, p.229). That lecture, Communism, should be compulsory reading for all in the Labour Party who call themselves socialists!

This lecture also expresses Morris's confidence in the working class to establish socialism:

Intelligence enough to conceive, courage enough to will, power enough to compel. If our ideas of a new Society are anything more than a dream, these three qualities must animate the due effective majority of the working-people; and then, I say, the thing will be done.

From the January 1989 issue of the Socialist Standard