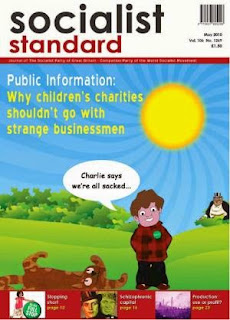 Shortly before the election was announced a mock fight broke out between Labour and the Tories over an increase in National Insurance contributions from 2011 announced in the budget. The Tories said that, if elected, they would reduce the increase and wheeled out a number of their business donators to support their position. Labour, unwisely, retorted that these business leaders had been deceived. Which brought protests from more of them. And so the saga went on for weeks.

The employers hadn’t been deceived. They knew exactly what they were doing – opposing a measure that would eat into their profits even if only modestly. National Insurance contributions are formally a payment, made by both employers and workers, into a notional fund out of which pensions, incapacity and other benefits are paid. In practice they are a tax, and indeed the “tax on jobs” that employers and the Tories claim, which by increasing labour costs decreases profits. Which is why the employers squealed.

But that’s not how things were presented. The Daily Telegraph (28 March) wrote:


“Economists say that rises in employer Nics are effectively passed on to workers in the form of lower wages or job cuts.”

Naturally, employers will seek to avoid a decrease in their profits by trying to reduce their labour costs but, if this was that easy, the question arises as to why they hadn’t done this before. The answer must be that they can’t reduce wages just like that. For a start, it would provoke the active or passive resistance of their workforce leading to a reduction in production and productivity, so turning out to be counter-productive. The pressure will be the other way too. An increase in the workers’ part of Nics means a decrease in their take-home pay, the effective price of their labour-power, what they have to live on to reproduce their working skills.

In the end the matter will be settled by the balance of forces on the labour market. It’s called the class struggle.

But what about “job cuts”? In German the word for employer is Arbeitgeber, literally “work-giver” (correspondingly, the word for employee is Arbeitnehmer or “work-taker”). Counter-intuitive as this is, since it’s workers that give their labour and employers who take it, it accurately sums up the position. Jobs belong to employers, not workers, and are for them to give and take away. Employers give workers jobs not because they are philanthropists who recognise that workers need a job to get money to live on, but in the hope of making a profit out of their labour. They can’t do without workers as it’s the unpaid labour of workers that’s the source of their profits.

Their professed concern for jobs in this instance is the height of hypocrisy. They want the government to find the money they accept is necessary to repay their fellow-capitalists who own the National Debt by … cutting civil service and local government jobs.

The whole episode was a charade because employers are not protesting against the lesser increase proposed by the Tories which, according to their arguments, ought also to have a harmful effect on wages and jobs even if not so much. They are prepared to absorb the Tory increase because they are making profits – those that weren’t and had no hope of recovery have gone out of business with their sales passing to their competitors – and so can afford to. They can afford the Labour increase too but, like any interest group, were protesting in the hope they won’t come off too badly.
Posted by Imposs1904 at 5:04 AM No comments: