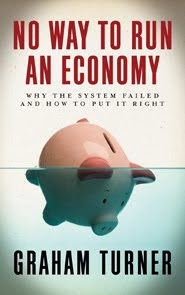 Book Review from the April 2010 issue of the Socialist Standard

No Way To Run An Economy. By Graham Turner, Pluto Press, 2009

This is the sequel to Turner’s The Credit Crunch reviewed in last April’s Socialist Standard. The book is essentially a Keynesian tome advocating quantitative easing, low interest rates and nationalisation of the banks as a way of dealing with the onset of financial crises like the most recent one.

Much that was both positive and negative about The Credit Crunch applies here too: there are some very useful graphs and statistics presented even though the general case for Keynesianism is necessarily weak. What is more interesting is that now there appears to be a partial and belated recognition of this that creeps into the analysis as the book develops. The chapter entitled ‘Structural Causes of the Recession’ in particular illustrates something of a shift in thinking to the effect that there may be something about capitalism that is fundamentally flawed in the way Marx had argued. Some of the discussion presented at this stage isn’t bad; if there is a problem it is that too much emphasis is placed on the recent decline in the share of the national product going to labour in countries like the US, meaning that allegedly consumption and profits can only be maintained in these circumstances through the extension of credit. He hedges his bets somewhat but ultimately argues that in pursuit of profits:


‘Companies are engaged in a competitive struggle, but the compression of wages will undermine the ability of consumers to buy and absorb the goods and services being produced. The contradictions with capitalism will eventually be exposed when consumers can no longer buy all the goods being produced’ (p114).

This neglects the fact that, as Marx pointed out, it is more typical for the share of wages relative to profits to rise as the boom nears its peak and that the inability of the working class to buy back all that is produced is not the cause of economic crises (if that was the case capitalism would be in permanent crisis). Ironically, Turner reproduces a key passage from Volume II of Marx’s Capital to this effect in the Notes at the end of the book, but clearly hasn’t applied or understood this point when formulating his own analysis.

Indeed, a fair part of his discussion of Marxian theories of economic crises seems to have been adapted from writers like the late Chris Harman of the SWP. This is not entirely surprising given the SWP’s own attempts to integrate aspects of Keynesian ideas within a Marxist framework, such as with the permanent arms economy argument as an explanation of the post-war boom, one which Turner seems appreciative of.

In fairness, Turner is at least starting to ask the right sort of questions in this book, though a realisation that crises within capitalism are caused by the drive to accumulate profits in a competitive environment where there is no planning between enterprises but an anarchy of production instead, would lead him to a clearer and different conclusion. This is that no amount of Keynesian intervention, monetary reform or redistribution of income can prevent the market economy’s periodic slide into chaos.
DAP
Posted by Imposs1904 at 6:44 PM No comments:

From the April 2010 issue of the Socialist Standard


The market system failed long before the present crash.

It wasn't that long ago when the academic discipline of economics bestrode the world. Trying to grasp Adam Smith's invisible hand and understanding the workings of the market system was a respected profession. Economists moved even beyond markets, extending their empires laying claim to large parts of social science, as complex disciplines such as human psychology and sociology were reduced to little more than a matter of competing agents and game theory. There was a reason the recent bestseller Freakonomics was sub-titled the “hidden side of everything”.

But like the cobbler's children, running around barefoot, recent events have exposed the poverty of the economists' understanding of their very own intellectual backyard, the capitalist economy. Their advice on human nature or politics carries somewhat less authority now that appear incapable of explaining the credit crunch or why none of them saw it coming.

The assembled might of the London School of Economics – one of the intellectual powerhouses of capitalist ideology – was recently challenged on why the credit crunch occurred and why they weren't able to foresee it. Which intellectual giant issued the challenge? Who is it that so has their finger on the pulse of everyday concerns of working people?

During a visit to the LSE recently, Her Royal Highness the Queen (for it was she) took time out from her busy schedule to wade into the debate. The fact that she might not be the best guide to the money system (given her reluctance to dirty her hands carrying money round with her), and is probably an unlikely candidate for repossession order (at least until we get a socialist majority) was not considered relevant.

Of course she does have her head on every coin, which demands some respect, so on that basis the response to the Queen's query of the LSE's “high policy forum of 22 economic heavyweights” appeared to involve them (metaphorically) lowering their collective heavyweight heads in shame and muttering under their breath “there are no simple answers” (m'am). The blame for missing the credit crunch was placed on “a failure of the collective imagination of many bright people” – the wording of which suggests that with the usual modesty. they still consider themselves members of that group.

No longer permitted to demand their heads on a sharp stick, as many of her loyal subjects would wish, the Queen instead settled for asking what they would recommend to prevent the financial crisis happening again. Doubtless she was not impressed with the World Socialist Movement's advice in this respect, (abolition of the wages system, your Majesty), unless of course this was accompanied by a full return to feudalism, in which case she might presumably be swayed.

It should be said that we claim no greater ability to predict economic crashes, than the self-proclaimed “bright minds” of capitalism. (Those of you who remember that Enron executives used to call themselves “the smartest guys in the room”, and the whole banking sector seemed to consider themselves “masters of the universe” may see a pattern emerging in how capitalists have grossly inflated views of themselves, not just their investments). Our view is that crashes are inherent to the system and are inherently unpredictable. If they were predictable, investors would act accordingly and make it unpredictable again.

There is nothing wrong with trying to understand capitalism, as long as the intent is to get rid of it. If you want to study the economy to try and make it work, you might as well read tea-leaves, or – better still perhaps – the scattered intestines of sacrificed investment bankers.

So what was the recommendation of the economic intellectuals to this royal command? In a squirming, obsequious response they said they saw no merit in using existing policy mechanisms which had all clearly failed to contain the market (a revolutionary view world socialists would share). More disappointingly they instead made a tentative modest proposal of her royal highness: that it would help everyone if she were to ask her ministers for a monthly update.

They go on: “ There is a need to develop a culture of questioning, in which no assumption is accepted without scepticism and a sufficiently broad array of outcomes is considered”. This is a pretty good summary of the scientific method. Economics has always resented the “dismal science” tag thrown its way. With the admission above from its highest priests, it could be argued that economics is some way from even laying claim to being a science, dismal or otherwise.

We would agree with the economists where they warn the Queen that “it is a dangerous conceit to believe that economic cycles can be eliminated”. But the wording suggests that this is some sort of human failing rather than the inherent flaw of a system that is – it should not be forgotten – just one option available to help humanity make its most critical decisions (that is production of things humanity needs). Indeed the economists continue “if you have a series of relatively buoyant years...not only do humans get flabby, also the feeling 'we've cracked that' is all too easy to spread. It is human nature”.

So there you have it. All of you who thought over the last 10 or 20 years that “you'd cracked it”, are to blame for getting “flabby”. And besides, it’s all conveniently in your genes anyway, didn’t you know? In future we can rest assured however – the Queen is on the case now.

Over the next few years of promised increased austerity – as hospitals close, schools fall apart and houses get repossessed – let us not forget that these hucksters, chancers and charlatans are the people who claim to be in charge of capitalism. But the market failed long before it crashed. Leave decision-making to others, we are told. Leave it to the bankers and the “bright minds”. Leave it to the economists and the politicians. Leave it to the capitalists and even our own royal relic of feudalism. They all still expect you to let them make the decisions. Fortunately, year by year, fewer of us remain quite so willing.
Brian Gardner
Posted by Imposs1904 at 3:56 PM No comments: