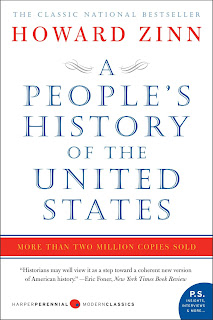 Book Review from the October 2005 issue of the Socialist Standard

Originally published in 1980 and recently updated, this is the history you don't learn in schools. Zinn, a historian, playwright and social activist, set out to write this book after teaching history and 'political science' for 20 years, half of which time he was involved in the civil rights movement in the South.

Zinn chronicles the passage of time from the arrival of Columbus in 1492 up to and including the election of 2000, cramming each of the 25 chapters with indisputable evidence of man's inhumanity to man under capitalism and empire building. He spells out clearly how cleverly and craftily the ruling elite managed and manipulated their way to accumulating vast fortunes at the expense of the masses, be they indigenous Caribbean or North American Indians, black slaves or the melange of European immigrants who became today's mostly white populace.

He exposes the lies and spin and self-interest from the time of the first president right through to the current incumbent. He shows how fear, suspicion and discrimination were deliberately harnessed as tools by those with power to set sections of the population against each other in order to pre-empt them joining forces against the real tyrants. The steady march of capitalism and the two-party system, whilst promoting democracy and wealth for all, have their eyes set only on the twin goals of control at home and control of the world, i.e. democracy for none and wealth for a few.

This book is in no way pessimistic; it is factual and points out numerous examples of individuals and groups who have refused to be denied. Zinn cites heartening stories of resistance, protest and refusal to accept the status quo; so many instances where people have demonstrated their opposition to the politics of empire and their support of "people power". In fact there is much useful 'ammunition' for proactive socialists here. His final sentence of the final chapter, post-9/11. attacks, regarding the Declaration of Independence says, "Thus, the future of democracy depended on the people and their growing consciousness of what was the decent way to relate to their fellow human beings all over the world."

The signs are growing all over the world, the people are sick and tired of all forms of empire, the world is ripening for socialism. Let's be ready.