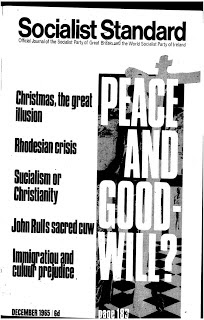 In the Declaration of Principles it is stated “. . .  the working class must organise consciously and politically for the conquest of the powers of government . . . " and “The SPGB, therefore, enters the field of political action determined to wage war against all other political parties. . .” You also rightly criticise the Labour Government for administering capitalism rather than attempting Socialism.

But how would the SPGB, given a majority in Parliament and support in the country comparable with the Labour Government, attempt to alter the means of production from Capitalist to Socialist in the face of opposition from the vested capitalist interests?

And if this country, or any other, was changed into a Socialist community, on what basis would it attempt to trade and keep relations with the non-Socialist world?

Reply
A Labour Government administers capitalism for the simple reason that it cannot do anything else. The Labour Party is an organisation which stands for the reform, and not the abolition, of capitalism; it asks for votes to run capitalism and when it is in power it cannot exceed this mandate, even supposing that it had the knowledge and the desire to do so.

The Labour Party does not care about the consciousness—or the lack of it—which is behind the votes which sends it to power. Just like any other capitalist political party, it will accept any support as long as it can achieve its main object of becoming the government.

That is why the Labour Party cannot “attempt” to establish Socialism; indeed, no political party can do this. Socialism cannot be imposed by a minority of political leaders; it will come only as the result of  a conscious action by the world working class. This action will be backed by the knowledge of what Socialism is and how it must be established. When the working class have this knowledge, they will elect Socialist delegates with a mandate to take all necessary steps to end the capitalist social system and to replace it with Socialism. Because of the knowledge of the people who have elected them, the delegates will have no power to do other than they have been instructed. This will be a massive, universal movement—it will not and cannot be confined to any one country or group of countries.

Socialism will mean the end of the private ownership of the means of wealth production. It will, therefore, also mean the end of trading, both national and international. There will be no separate nations to compete against and to bargain with, each other. Society’s wealth will move freely over the world, from the places where it is produced to the places where it is needed. The entire operation wilt be governed by human needs, in every sense of the term.

Email ThisBlogThis!Share to TwitterShare to FacebookShare to Pinterest
Labels: December 1965, Declaration of Principles, Letters to the Editor, Majority Understanding, R1965

From the December 1965 issue of the Socialist Standard

Things in Trinidad are warming up. Elections are next year and so far we have four political parties in the fray. The P.N.M. (Peoples National Movement) under the leadership of Dr. Eric Williams, is still the hot favourite to continue, while the D.L.P. (Democratic Labour Party) is losing ground. Although still officially the Opposition, it is led by London-based Dr. Capildeo. A comparatively new party, the Liberals, led by Mr. Farquhar, is gaining what the D.L.P. is losing, and the last-formed party, the
Farmers and Workers Party, is led by Mr. C. L. R. James.

Earlier this year the Government passed a Bill aimed at curbing strikes. The Bill is known as the Industrial Stabilisation Act (I.S.A). The Prime Minister announced there were too many strikes in the country, which interfered with the economy and frightened away foreign or would-be investors, so therefore the Bill is justified. This Act has curtailed the functions of the Trade Unions, as all disputes must go to the Industrial Court for its ruling. There is no appeal against judgment and since all those taking part in strike action in any way can be jailed for long periods, five Trade Unions have got their tails between their legs. As a result the various Unions are divided on the issue, some for the Act, others against it. The trick of the capitalists to divide the working class is self-evident. On the scene at this time is Mr. C. L. R. James, who contends that the I.S.A. is a violation not only of the Constitution, but of the rights of the workers, who are reduced to nothing but slaves. He is joined by Mr. G. Weekes, President-General of the powerful oil workers’ Union, and slowly other Union leaders are following. The Unions have now obtained the services of Mr. Platt-Mills, Q.C., to challenge the validity of the I.S.A. in the light of the Constitution.

To a Socialist one thing is clear. Whatever the outcome—the workers will have nothing to gain.
Corbie,
Trinidad.

From the December 1965 issue of the Socialist Standard

The record of the twists and turns of the so-called communist parties throughout the world are well-known to those who bother to study working-class political history. In view of the prominence currently given to the colour problem both here and in America it will be useful to recall one incident in the history of the American party. It is taken from a review in the Weekly People (September 13th, 1958) of New York of The American Communist Party: A Critical History (1919-1957) by Irving Howe and Lewis Coser.

“World War II changed also this. In September of 1941, Benjamin Davis, soon to become a prominent Negro Communist, wrote that The CP is disturbed by the increasing struggle of Negroes for jobs in defence plants.’ (Authors' italics). The CP dissolved its Southern branches (those that did not exist solely on paper) during the war in order to mollify the Southern wing of the Democratic Party by showing its zeal to help prosecute the war with no ‘dissension’ in the South.
“Another bit of CP history from the mass of material presented by Coser and Howe deserves to be included here. The authors describe it as ‘one of those peculiarly symptomatic incidents that reveal more than any number of party documents.’ In 1945, four Negro WAC's at Fort Devens discovered a group of wounded Negro soldiers who had been left unattended. When they complained to the camp authorities, the Army’s answer was a court-martial!
“The protests from all sides were so vigorous that the Army reversed its decision. This reversal, which brought some satisfaction to those with normal feelings of good will and a sense of fair play, brought only pain to Ben Davis. In the Daily Worker of April 8th, 1945, the official organ of the CP., he reprimanded the WAC’s for disturbing the Communist hoped-for serenity of the domestic scene.
“The US general staff has on many occasions . . . proved that they deserve their full confidence of the Negro people . . . We cannot temporarily stop the war until all questions of discrimination are ironed out.’”