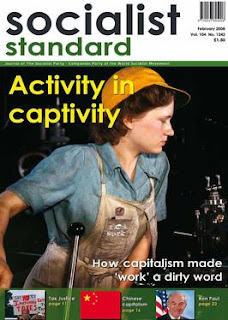 The price of bread went up by 10 percent last year and is likely to go up again this year. Wheat is a commodity, something produced primarily for sale not use; in fact it is a world commodity traded on world markets and so subject to international speculators betting on its future price going up or down. Its price is fixed by trading in Chicago where speculators as well as genuine buyers and sellers meet electronically. The Times (18 December) reported that "the Chicago wheat price has risen from about $5 a bushel in the fourth quarter of last year to reach $10.09 yesterday".

As wheat is the main ingredient of bread what happens in Chicago in the end affects the price of bread too. That the price of such an everyday item depends on world developments is a striking illustration of the world-wide nature of production today and one of the reasons why socialists say that the basis for a world socialist society already exists today.
The price of wheat is fixed in Chicago because the US is the biggest exporter of wheat, from its highly productive prairie farms. According to estimates by the International Grains Council, in 2007 of the 56 million tonnes produced in the US, 32 million were exported. The other major exporters were Canada (15 million), Russia (12 million), EU (10 million) and Argentina (10 million). (See the following link). Normally Australia would be the second biggest exporter but a prolonged drought there reduced its 2007 output.

The IGC forecasts that world wheat consumption in 2007/8 will be 611 million tonnes whereas production in 2007 will only have been 603 million. So countries have been digging into their reserves and will be looking to replenish them. Hence the current rise in the world price of wheat. There is even talk of this being the biggest wheat shortage in history.

As the price of wheat rises so it becomes profitable to plant more land with it, either by switching from something else or by bringing previously unused land back into cultivation. This latter is what has happened in Europe. Meeting in Brussels on 26 September EU agriculture ministers agreed to fix a zero "set-aside" rate for the autumn 2007 and spring 2008 sowings. The press release went on: "The change comes in response to the increasingly tight situation on the cereals market. It should increase next year's cereals harvest by at least 10 million tonnes".

Set-aside is the scheme under which EU farmers are paid not to grow food. In the past they were encouraged just to let the land lie fallow but, more recently with the rise of an environmentalist conscience, the scheme has been justified in terms of creating nature reserves and restoring "natural" wildernesses. That the whole scheme is in effect being suspended and previously set-aside land brought back into cultivation, in response to rising world wheat prices, exposes the real reason for set-aside: maintaining crop prices by reducing supply – while the world poor starve.

Which confirms what socialists have long said, that the world could produce more food if the aim of production was the satisfaction of human needs. People are starving simply because they lack the means to pay, not because the food cannot be produced – as this new output demonstrates, there is plenty of scope for increasing supply.
Posted by Imposs1904 at 1:36 AM No comments: