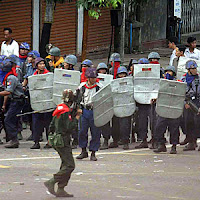 Latest post from the SPGB blog, Socialism Or Your Money Back

Burma (or Myanmar as the present rulers want it to be called) is, and has been since 1962, a military dictatorship, one which even has had the cheek to claim to be socialist. Now, once again, sections of the population are demonstrating for there to be more elbow room for people to organise politically and to express critical political views.

Naturally as socialists we would welcome this as freedom of movement and expression, the freedom to organise in trade unions, to organise politically and to participate in elections are of great importance to all workers and are vital to the success of the socialist movement.

We must, however, warn workers in Burma against becoming the pawns of capitalist interests, both home-grown and external.

Burma is the largest country in South East Asia and is of strategic importance, especially for its north-eastern neighbour, China (which also has the cheek to claim to be socialist), as it provides Chinese capitalism with an outlet to the Indian Ocean. In April this year the Chinese authorities approved the construction of an oil pipeline from the Burmese port of Sitwe to China (see here). According to an article in Asia Times (27 September), other economic interests are involved too (see here).

The current regime in Burma is pro-China. The US, anticipating that its main rival for world hegemony this century is likely to be China, has been pursuing a policy of trying to encircle China with a ring of military bases. They are anxious for "regime-change" in Burma, to one favourable to them, so as to further hem in China. And to this end are encouraging, and no doubt financing, the Burmese opposition.

China, on the other hand, is anxious to maintain the present regime and is likely to use its position as one of the five permanent members of the UN Security Council, with the power of veto, to prevent Burma being given anything more than a slap on the wrist for shooting down demonstrators.

Neither the US nor China care a fig about "democracy" in Burma. They are both concerned merely with their own strategic interests. So, workers in Burma should not be taken in by Bush when he says he wants to see Burma become a "democracy". What he means is that he wants to see a regime installed in Rangoon that will be pro-US and pro-market capitalism. And there is no reason whatsoever why workers should help him do this.

Nevertheless, workers should still try, independently of pro-capitalist groups, to take advantage of this rivalry between China and the US to gain a little more elbow room to pursue their own class interests.