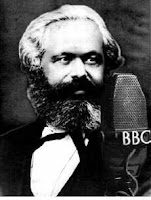 Don't be put off by the title; when you read it – as you should – it all makes sense. In 1999 Karl Marx was voted the “Greatest Thinker of the Millennium” in a BBC online poll. Then in 2005 he was voted the “Greatest Philosopher” in a BBC poll. And yet the BBC has always had a problem in dealing with such a great thinker and philosopher, perhaps because he didn't win a Nobel Prize. In the philosopher contest they invited Francis Wheen on to a BBC radio programme to explain Marx's theories but he said they were a form of economic determinism, in that economic relations determined all other features of society, including ideas.

It's a popular misinterpretation, one which Albert Einstein didn't repeat when he declared to the world that he was a socialist in an article entitled Why Socialism? in 1949. Einstein's analysis of capitalism is still broadly acceptable today even if his conception of socialism is not, being essentially a form of state capitalism. Amartya Sen, a professional economist, also has a state capitalist view of socialism but his understanding of present-day capitalism looks muddled when compared with the analysis of the Nobel Prize-winning physicist Einstein.

Sen won the 1998 “Bank of Sweden Prize in Economic Sciences in Memory of Alfred Nobel” (not to be confused with the Nobel Prize, which is awarded by the Nobel Foundation) for his contribution to “welfare economics.” Sen correctly saw that famines were caused by poverty and not an inability to feed starving people. However, he put forward a set of “market entitlements” which were meant to combat poverty; but as this left the class monopoly of the means of life untouched it should not be surprising that this could not reduce poverty or famines.

Binay Sarkar exposes these and other reformist illusions, along with Muhammed Yunus's plans for “Banking for Peace.” Yunus was awarded the 2006 “Nobel Peace Prize” (given by the Norwegian parliament, not the Nobel Foundation) for his “commitment to the Grameen cause.” This envisaged fighting poverty by lending money, mainly to women, to facilitate self-employment projects and promote women empowerment. But as Adam Buick points out in his Introduction to this book, banking “is an integral part of the capitalist system of production for profit which is the cause of modern wars.” Despite the excessive use of quotations, this book deserves to be in every socialist's collection.
Lew Higgins
Posted by Imposs1904 at 5:16 AM No comments: