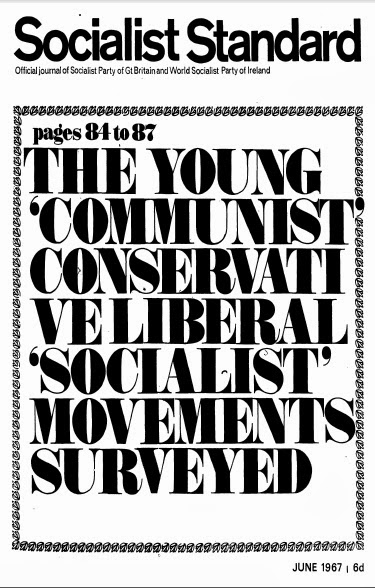 From the June 1967 issue of the Socialist Standard

One thing about the Young "Communist" League: no one can accuse them of being internationalists. Time was, of course, when—like their CP senior—they were slavish Kremlinites. Today their old Russian nationalism has given way to a more respectable British nationalism.

"It is plain to see that Britain, with an outdated way of life, no longer stands among the foremost nations of the world", they lament, adding, Wilson-like: "We want to change the whole way the country is run, to get Britain out of the rut and moving forward." (The Trend—Communism).

Not so long ago, discussion with members of the "Communist" Party or Young "Communist" League produced, from their side, little more than naive eulogies of the Russian workers' paradise. Today, any mention of Russian state capitalism on our part usually gets the embarrassed rejoinder: "We'll build British socialism so as to make the Russians envious", or some such disclaimer. It has become increasingly difficult for any well-informed person to hold that the Soviet system is fundamentally different from the West: a more plausible line is to claim that here and there they can plan things a bit more efficiently. Not that we want to accuse the YCL of being well-informed, either. But the spectacle of the world's two biggest "socialist" states rattling sabres at each other with jingoistic ferocity should be enough to shake the most paranoid of the Moscow flock.

Naturally the YCLers want the best of all worlds: the Romantic legend of the barricades and red banners, plus an ultra-modern teenage image—and of course, dear old Britain. Their horrible mixture of trendy imbecility, starry-eyed echoes of revolution, and patriotism, is summed up in passage of lyrical splendour like

The old-fashioned way our country is run is turning Britain into a backward-facing country; in the past we have see Conservative and Liberal governments; these are old parties with old ideas; they have failed to make Britain a country for all people, not just the rich. Now we have a Labour government which could change Britain, but which is following the old out-dated ideas. We want to change Britain into a Britain for everybody. (Who is Wrong—Youth or Britain?)

They do talk a lot about "socialism". They do use Marxist terminology. They do draw attention to many of the abuses of capitalism. (What capitalist party doesn't?) And they do insist, at least verbally, on making radical changes in the structure of society. "We Communists make no secret of our aims," they state—a ludicrous near-quote from the 1847 Manifesto. To some extent this is true. Through the fog of image-building phrases it is possible to interpret broadly what the YCL wants. What is it?

First of all, as we have pointed out, they are good patriots. Secondly, they are full of advice about how to run capitalism: "U.S. Hands Off Vietnam," "Jobs Not Bombs" etc. They are bold reformists, unaware that it is impossible to run capitalism in the interests of its wage-slaves.

They will be quick to point out that these are only "immediate demands." What they're ultimately after is "socialism." But words are cheap. What do they mean by this? There can be no doubt about this. They persist in referring to Russia's allies as "the socialist countries." They are still firmly committed to support a type of society basically like that in Russia. But they also give a description of "a socialist Britain": a list of reforms including cheaper rents, cheaper transport, ending unemployment, shorter working hours, equal pay for women, more sports and arts facilities, "democracy in industry," cheaper holidays, and "a good pension." Most of these are advocated by every capitalist party, and none of them touches the basis of capitalism. Of course, they are all to be welcomed if we can get them (with the possible exception of  "democracy in industry," which if Russia is anything to go by means castration of the unions). But they do not affect the root cause of most human misery, which is the system of production for profit.

There are two items missed out of the above summary of the YCL's "socialist Britain," because they are worth examining more closely:

"You go to work . . . to a factory that used to be owned by Fords. But that was in the past. It's against the law now to make money out of others' work. Ford's belongs to the people who work there and so do the profits of course.
. . . but would you be free? Well, if you mean are there other political parties, yes there are. Mind you, there no millionaires to back the Tory party."

Obviously the YCL has the idea that it is possible to look at society and just eliminate its undesirable features piecemeal. It is not. There are some aspects of society which entail certain consequences. For instance, if there is production for sales at a profit, there are bound to be great inequality of wealth, as the example of Russia has shown. Lenin apparently sincerely thought his government could introduce equal wages for everybody, but the economic laws of capitalism dictated that there should be wide differentials. There are millionaires in Russia, after 50 years of "socialist" rule. Why? And would Britain, if the "Communists" came to power, allow them to do what they are unable to do in Russia or Eastern Europe?

At least the YCL doesn't want to take away the measure of political democracy we have—but why don't they draw the logical conclusion and denounce its absence in Russia?

The YCL is currently selling copies of "a great, new, top quality, hand screen-printed poster of an original lithographic drawing of Karl Marx."

A father-figure for the bedroom wall isn't good enough. If the YCLers claim to be Marxists they ought to read Marx, and try it without the spectacles of Lenin or Emile Burns. They might them wonder why Marx put such emphasis on his "revolutionary watchword, 'Abolition of the wages system!'" Or why he stressed that the existence of the state was a sure sign of class coercion. Pondering questions like these would lead unbigoted members of the YCL to see through the pseudo-revolutionary catchphrases of the "Communist" Party to the the reformist futility these shoddy words conceal. 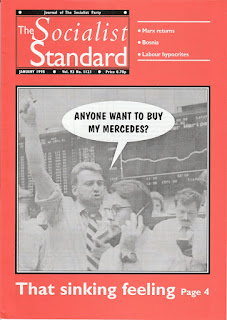 From the January 1998 issue of the Socialist Standard

One hundred and fifty years after the publication of the Communist Manifesto, the New Yorker has discovered that "Marx's version of free enterprise also chimes with the views of many contemporary businessmen, who would rather be flogged than labelled Marxist".

John Cassidy's 5,000-word essay "The Return of Karl Marx" in the October 27 issue of this magazine from the bastion of American capitalism does not include Marx's view of a future world based on common ownership. Nor does it support his labour theory of value. It is however amazingly laudatory when dealing with Marx's analysis of how capitalist accumulation operates. Cassidy quotes one Wall Street organiser of stock issues as saying: "The longer I spend on Wall Street, the more convinced I am that Marx was right . . . I am absolutely convinced that Marx's approach is the best way to look at capitalism."

At first Cassidy was astonished at that claim and recalled that he had studied economics with his financial friend at Oxford in the early eighties when their teacher had taught them to agree with Keynes that Marx's economic theories were "complicated hocus pocus". He decided to re-examine Marx's writings and found himself agreeing with his Wall Street friend.

After sneering at Marx's writing style he goes on to heap praise on his analysis of capitalism:

"When he wasn't driving the reader to distraction, he wrote rivetting passages about globalizaion, inequality, political corruption, monopolization, technical progress, the decline of high culture, and the enervating nature of modern existence--issues that economists are now confronting anew, sometimes without realising that they are walking in Marx's footsteps."

Cassidy is unstinting in his praise for Marx's materialist conception of history:

"Indeed, as Sir John Hicks, a Nobel Prize-winning British economist, noted in 1969, when it comes to theories of history Karl Marx still has the field pretty much to himself. It is, Hicks wrote; 'extraordinary that one hundred years after Das Kapital . . . so little else should have emerged'."

Globalisation
On the growth of global markets Cassidy again praises Marx. "Globalization is the buzzword of the late twentieth century, on the lips of everybody from Jiang Zemin to Tony Blair, but Marx predicted most of its ramifications a hundred and fifty years ago. Capitalism is now well on its way to transforming the world into a single market, with the nations of Europe, Asia, and the Americas evolving into three rival trading blocs within that market."

While criticising Marx's view of the struggle between worker and capitalist as "too rigid", Cassidy provides some startling figures about ownership in the USA in modern times. "Between 1980 and 1996, the share of total household income going to the richest five percent of the families in the country increased from 15.3 percent to 20.3 percent, while the share of the income going to the poorest sixty percent of families fell from 34.2 percent to 30 percent." Even more to the point he writes: "According to Edward Wolff, a professor of economics at New York University, half of all financial assets in the country are owned by the richest one percent of the population, and more than three-quarters of them are owned by the richest ten percent."

In discussing the role of the unemployed in keeping down wages, Cassidy is in no doubt that Marx got that right too. "Marx believed that wages were held down by the presence of a 'reserve army' of unemployed workers who attempt to underbid the employed. Reduce the ranks of this army, he said, and wages would rise--just as they have started to do in the last year."

The role of the state
This remarkable essay ends with the writer discussing the relationship of politics to ownership. "Perhaps the most enduring elements of Marx's work is his discussion of where power lies in a capitalist society . . . Marx, of course delighted in declaring that politicians merely carry water for their corporate paymasters. 'The executive of the modern state is but a committee for managing the common affairs of the bourgeoisie,' he wrote in the 'Manifesto', and he later singled out American politicians saying they had been 'subordinated' to 'bourgeois production' since the days of George Washington. The sight of a President granting shady businessmen access to the White House in return for campaign contributions would have shocked him not at all."

For socialists reading any praise for the works of Karl Marx in such a supporter of American capitalism as the New Yorker magazine is astonishing. It shows that once an enquirer frees himself of the prejudices of orthodox thinking the only way to understand how world capitalism is developing is from the standpoint of Marx's materialist conception of history.

With a little more application Cassidy may even rid himself of the orthodox nonsense that he at present embraces; namely "supply and demand curves, production functions and game theory", and realise that Marx's labour theory of value is the view that best explains production, exploitation and surplus value.

But let's not look for too much. We still relish his conclusion that "despite his errors, he was a man for whom our economic system held few surprises. His books will be worth reading as long as capitalism endures."
Richard Donnelly
Posted by Imposs1904 at 9:50 AM No comments: