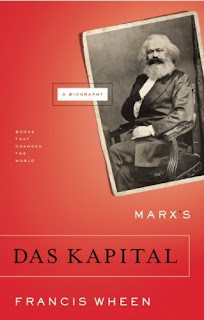 Book Review from the November 2007 issue of the Socialist Standard

Wheen wrote a well-received biography of Marx and here he turns his attention to Marx’s greatest work.

He traces the influences on Capital, the labours Marx went through in writing it, its main ideas, and its subsequent reception and reputation. He gives a decent account of how surplus value comes about: labour power creates more value than it has itself. To the capitalist, the labour market is just another branch of the commodity market. The effects of machinery are invariably malign: the worker is deskilled and forced to work longer hours. Wheen is particularly good in discussing the idea of ‘increasing misery’, and shows that this has to be understood in relative terms. Marx did not claim that there would be an absolute decline in wages, only a relative decline in comparison with profits. And as another example, workers in Britain now work longer hours than was the case in the early 1980s, so we are indeed more degraded as time (and capitalism) goes on.

In the chapter on the ‘Afterlife’ of Capital, Wheen discusses Marx’s fall-out with Hyndman, who had plagiarised from him with no acknowledgement. He also demonstrates that Bolshevism bore little relation to Marx’s ideas. Citing Lenin‘s arguments that workers should place themselves under the leadership of professional revolutionaries, he notes that here ‘one can see in embryonic form what eventually became a monstrous tyranny’.

Marx’s great triumph, says Wheen, lies in revealing the nature of capitalism, and this makes his work still valid and relevant today: he concludes that Marx ‘could yet become the most influential thinker of the twenty-first century’.