Marx begins his examination of capitalism in Capital with the analysis of the commodity; and he succinctly explains the reason for his starting point in the first paragraph:

“The wealth of societies in which the capitalist mode of production prevails appears as an ‘immense collection of commodities’; the individual commodity appears as its [wealth’s] elementary form. Our investigation therefore begins with the analysis of the commodity.” (Penguin edition; p. 126)

The term “wealth” is used here not to refer to riches in the form of money, but rather to the material wealth essential to any form of society: the products produced and consumed by human beings to sustain and improve their lives.

Commodities of course existed prior to the emergence of capitalism, as did money, but it is only under the specific mode of production of capitalism that the bulk of material wealth—the vast majority of products of labor—take the commodity form.

It is true that some things produced under capitalism are for the direct consumption of the producer rather than for exchange (like tomatoes grown in a backyard garden), but such products are clearly an exception to the prevailing commodity production. A quick glance down the aisles of Wal-Mart is enough to confirm Marx’s observation that capitalist wealth appears as a vast accumulation of commodities. It was true in 1867 when Capital was published and is even more the case today.

There is nothing arbitrary, then, about Marx’s starting point, as it is based on two undisputable facts: (1) material wealth must be produced in any form of society; (2) material wealth overwhelmingly takes the commodity form in the specific case of capitalism.

Marx is not starting with some abstract concept that only exists in his own mind, but rather with an objective observation concerning capitalist society. (We will see later that nearly every misinterpretation of Marx’s “labor theory of value” is based on an inability to appreciate his starting point in Capital.)

In examining capitalism, Marx naturally concerns himself primarily with understanding the specific functioning of this mode of production, which sets it apart from other forms of society. So he begins with the examination of the commodity as the specific form of products of labor under capitalism or “elementary form” of capitalist wealth.

The defenders of capitalism, in contrast, attempt to present the commodity and other economic forms of capitalism as if they were common to any form of society; which is to say, they try to portray capitalist production as synonymous with social production in general—or argue that it is a reflection of some unchanging human “propensity to truck, barter, and exchange one thing for another” (Adam Smith).

That first paragraph of Capital teaches (or at least reminds) us though that the commoditization of wealth is only a widespread phenomenon “in those societies where the capitalist mode of production prevails.” There is no iron-clad law, in other words, that products of labor need to pass through the market before their useful qualities can be enjoyed.

The “unchanging law” of human society is not commodity exchange, or the need for money to mediate that exchange, but rather the simple fact that material wealth must be produced and consumed in order for a society and the people within it to continue to exist.

There are specific reasons—specific social or class relations—that account for why products of labor take the commodity form under capitalism (as Marx explains later in Chapter one). And once we understand those reasons why commodity production is necessary under capitalist social relations, we can already begin to understand what sort of different social relations will be necessary to move beyond the historical stage of commodity production.

The fact that we are so immersed in capitalism, however, where we have to pay for almost everything we consume, often blinds us to this simple historical fact that human beings under feudalism and other pre-capitalist forms of society managed to produce and distribute (the bulk of) material wealth in a way that did not involve buying and selling.

Marx overcomes this capitalist-induced myopia by treating capitalism as one historical mode of production (among others), which functions in specific ways under its specific social relations. He teaches us to distinguish between what is general to any form of society, and what is specific to capitalism—as in the distinction mentioned earlier between “material wealth” and its “commodity form.”

[1] This is from the translation of Hans Ehrbar, available on his website (http://www.econ.utah.edu/~ehrbar/akmc.htm). Ehrbar has translated Capital and other works by Marx; and in the annotated version of his translation he guides the reader through the text, while pointing out many of the mistranslations of the Penguin and International Publishers editions of Capital. His website is an essential resource for anyone interested in studying Capital. 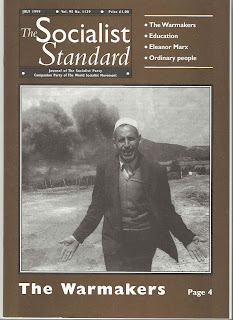 From as far back as I can ever remember, probably from the first time I became aware of my social environment, I have found myself wincing at the term "ordinary people". Politicians use it when speaking of the electorate. It is used mostly to delineate the working class and it has become a derogatory description either for people who are not members of the establishment, or for those who do not get themselves in the news. What the word conjures up, for me at any rate, is a picture of thousands upon thousands of dull, drab powerless people, hollow-eyed and mindless, trudging to work with no other thought in their heads than sullen obedience to their masters. Perhaps somewhere there are workers who appear like characters from Brave New World, but that is not my experience.

There have always been people who crave attention; they become local councillors, trade union leaders, MPs. Maybe some of them start out with altruistic motives and, are therefore, surprised at how being in the limelight makes them feel extraordinary. Surprise must soon turn to elation because it could be tempting to feel, once you are in the news, that you are in some way an authority, that your every word is received like pearls of wisdom escaping from the lips of the Oracle. Yet it is a myth that leaders know better than we do and possess the God-given right to direct our lives.

I once heard a man on a radio programme announce, when asked a question about the preparation of vegetables before cooking them, that, yes, it is preferable to rinse them lightly under the tap. Now isn't that something? I didn't know that, did you? He didn't say anything else. He didn't need to. He was an expert. Another time I listened with horror to Paul Boateng telling parents that it was perfectly all right to smack their children, when I had spent most of my life believing that it wasn't. But he is one of those with the authority (and the audacity) to inform the rest of the nation that a belt round the ear does our kids the world of good. Some people will believe him. He is extraordinary, after all.

My dictionary says: Ordinary—usual, common, normal, not specially good. I don't know anyone like that. In my street lives a builder. Among other things he builds marvellous flint walls, poetry in themselves. He erected the conservatory which acts as an extension on the back of my house and he worked with a skill which I found fascinating. When Henry plies his trade he does it lovingly and gracefully and so for the first time in my life I began to value people who built things. But that is not all that Henry does. He has an allotment where he grows spectacular vegetables, row-upon-row of whatever is in season. I am on the receiving end of some of those vegetables and they are wonderful to behold. Sometimes he will take a cabbage, a green pepper or a bunch of carrots from the proffered bag and comment on how fine it is. He says it with pride and I know he is remembering buying the seeds and sowing them in the ground. He would have nurtured them as tenderly as if they were his own children until they were ready to be harvested. And at the end of the season he would set about preparing the soil for his next act of creation. Henry doesn't say much, but is he ordinary? Never. Scratch the surface of anyone you know and you will see what I mean.

My own mother would have come under that awful heading "ordinary". Though bowed down by poverty and five kids she played the piano. Neighbours would come to our front gate to listen to her. I would be moved to tears at the pieces she played with such feeling. I used to wonder that if she hadn't been my mother then who would she have been? I felt a little jealous that inside my mother dwelt another person—a woman who could produce such beautiful musical sounds. She wasn't ordinary.

Ordinary under capitalism means you haven't been discovered or there isn't a market for you. It means, too, that you are there to be told what to do. Your opinions are of no consequence unless the powers-that-be have created you or you are rich and powerful enough to create yourself. You are mostly not defined by your uniqueness but by your market value. When I give an acquaintance the Socialist Standard to read and they come across something I have written, they will often ask "Do they pay you?" When I answer in the negative they quickly lose interest in my modest efforts as though there can be little merit in them unless they bring in the filthy lucre. My response to people who ask what I like doing is always that I like writing. They invariably ask "Are you a professional?" So little in life has real value unless it is rewarded with money. Yet the majority of us would surely blossom without the daily grind.

My little daughter once wanted to be a nurse. She spent happy hours heaping blankets upon her father as he snoozed in his armchair, sticking imaginary hypodermic needles into his arms and wiping his brow with a tea towel. All this soon altered as her working life loomed large. True she could have grown out of her desire to heal the sick but in the end what must focus our minds is how much we can get paid for the countless hours spent away from home for the best part of our lives. Most of us do it without understanding that there is another way of organising our time. But that does not mean we are ordinary.
Heather Ball
Posted by Imposs1904 at 12:55 PM No comments: