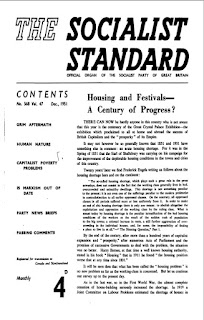 From the December 1951 issue of the Socialist Standard


Once we were often told at our propaganda meetings that the capitalists obtained their wealth by hard work and saving. We are pleased to say that this is not told us so often now, which is an indication of the increase in the knowledge of politics and economics on the part of the working-class. It is the workers and not the capitalists who work hard and the only thing it will bring them is to an early grave. The workers are also the savers. They save for a holiday, or against sickness, or unemployment and some other unexpected expenditure. But however much they save it can never be enough to enable them to start out as capitalists. Capitalists don't work hard. They needn't. They have others to work hard for them. They may, and probably do save, but many of them have such large incomes that spend as they will they cannot use them all, and there is a balance left over for reinvestment.

We think it might be of interest now to examine the foundations of the wealth of the capitalist class of this country. It is a story of horror, blood and slaughter. For example, large amounts of wealth were obtained by piracy. Raleigh, Drake and other noted sea-captains of their day were nothing but pirates who preyed on Spanish ships coming from South America laden with gold and treasure. It is true that this treasure had been stolen by the Spaniards from the Incas of Peru and the aristocracy of Mexico, and that the mass of the population of Peru and Mexico have lived in direst poverty while their masters were in luxury. But where is the legal genius who can justify theft on the grounds that the things stolen had already been the subject of theft?

Another source of early capital was the Lombards. These were Italians who settled in London from the 12th to the 17th centuries. Hence Lombard Street in the heart of the financial centre of the world. These Lombards were, of course, strict Roman Catholics, and lending money at interest was anathema to Catholicism. But the Lombards did not allow religious scruples to interfere with business, so they lent large sums of money to English merchants and traders. The Dutch, too, when their commercial supremacy was ended, lent large sums to the English.

India, too, played its part in providing capital for early English capitalism. The main channel for this was the East India company, and its higher employees. The Indian peasants suffered severely from the activities of these people. They cornered essential foodstuffs and sent the price sky-rocketing. They cornered rice, an essential part of the Indian peasants' diet and those peasants who could not pay the very high prices were permitted to starve.

Bu the blackest page in English mercantile history is undoubtedly the slave trade. For three hundred years English merchants carried on this foul trade. It is computed that in all 5,000,000 Africans who went into slavery in America and millions more either died on the voyage or in the slave raids. But it was a source of considerable wealth to those operating it. It is said that large numbers of churches and chapels in Bristol, Southampton and Liverpool were built with money made in the slave trade.

And then after 300 years it was abolished. But those loudest in their denunciation of it were stalwart defenders of child slavery in England, when children of eight years of age were working in mill and mine.

And so we have given you a short history of where capital came from in the first instance. It is a story of blood and horror.

True these sort of things don't happen now. But now in order to defend their system the capitalists are prepared to sacrifice the lives of millions of workers in their wars. Do you not think it is time you ended it?
Clifford Groves
Posted by Imposs1904 at 6:51 PM No comments: 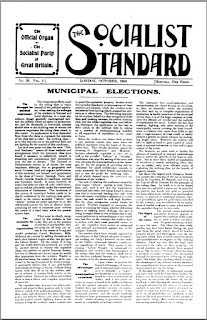 From the October 1906 issue of the Socialist Standard

The journalistic dead season having lived up to its name and left the unfortunate "Yellow" Press Editor with a plentiful lack of that sensational mixture upon which the success of his paper and the realisation of his wages depend; there being no "ripper" murders to write up and no Peking massacres to record (and the journalistic imagination being apparently unequal to the manufacture of a few): the sea serpent and the giant gooseberry having lost their charm and the lamp-black and lightning having run rather low (misfortunes rarely, if ever, come singly) - all these stand-bys having failed, it is not surprising to find the news sheets casting about somewhat frantically for the wherewithal to fill the aching void. And so it comes about that the Express—pushful Pearson's periodical—is kindly devoting some of its space to an entirely disinterested consideration of what it is pleased to call Socialism and the fraud thereof.

From a perusal of some of the articles we regretfully conclude that the writer's knowledge of Socialism is considerably less extensive than his knowledge of the manner in which matter should be padded so as to fill the largest possible space. His main fear seems to be that under Socialism initiative will be crushed by a horrible tyranny and the people enslaved (initiative, of course, receiving every encouragement to-day and slavery being unknown!), and he regards with loathing and horror the possible advent of a system of free love which is, it seems, to be one of the main features of the Socialist Society. By which we are led to believe that our "yellow" editor and his contributors have been dipping deep into the rubbish heap of controversy. Their objections were raised in the childhood of the Socialist movement and doubtless did effective service in their day and generation as bogies. But that is possible to light up fresh candles inside these battered turnip heads and use them again as scares, we doubt if even a "yellow" editor is stupid enough to believe.

An Explanation and Nemesis!
Two points which have arisen in connection with the "Fraud of Socialism: series call for comment. The first is as to the interview the Express representative is supposed to have had with an official of the S.P.G.B. who gave him the Party view of the burning question of Trade Unionism. It is true that an Express representative called at the Head Office of the Party. It is not true that our official gave the Express's man the information printed as the view of the Party on Trade Unionism. The Express writer has taken a paragraph from the discussion on Trade Unionism printed in this journal and represented it as the Party's attitude. It happens that it is not the Party attitude at all. The impression is therefore forced upon us that as there is no immediate opportunity of "faking" a massacre, the "yellow" Press is keeping its hand in by "faking" an interview, —a rather novel application of the arts of war to the requirements of peace!

The other point the Express makes with some very good ground indeed. It argues that a deliberate endeavour has been made by men who at times profess Socialism, to capture the funds of the Trade Unions with the object of entering, and maintaining themselves in, Parliament. It alleges that in order to effect their purpose these men have disguised their Socialism under the ambiguous guise of "Labour" knowing quite well they could not obtain support otherwise.

While we are not concerned to impute motives there is unfortunately very good evidence which can be adduced in support of this charge. The S.P.G.B. came into existence as a protest against the methods of Parties which, while claiming to be Socialist, obscured their Socialism by relegating it to a position of greater or lesser obscurity, and confused important issues by compromise; in order to ensure working-class support for their candidates. From our point of view the man who lowers his flag in deference to ignorant popular clamour so that he may secure for himself place and power, has sold himself and his ideal for a mess of pottage and ceased to stand as champion of the movement from which he "ratted." This is bad enough. But if he "rats" with the deliberate intention of deceiving those whose support he has secured by so doing, and having obtained his position uses it to further the object he ostensibly rejected when appealing for support, he is guilty of a deplorably indecent act which will undoubtedly redound to his own discredit as well as to the injury of the movement with which he is associated.

The case of the I.L.P. is in point. Members of that Party have obscured the Socialism they sometimes profess and have obtained the support of L.R.C. funds while masquerading as "Labour"men. In defence of this position Keir Hardie has himself argued that in the L.R.C. they were neither Liberal nor Tory nor Socialist, reducing Socialism to the same category as capitalist Liberalism or Toryism. Keir Hardie and his friends, now that they seem disposed to become Socialists again (howbeit Socialists of the New Testament type - whatever weird species that may be) must not be surprised, therefore, if the appellation "fraud" is attached to them and if they are forcefully reminded of their own argument. If inside the L.R.C. they are neither Liberal nor Tory nor Socialist, Hardie can only now press his Socialism as an L.R.C. member, by throwing over the platform upon which he stood when he secured L.R.C. support. We cannot defend the I.L.P. members and those who act with them from the charge brought against them. The charge is true. We protest, however, against it being shifted to apply to Socialism. We deplore and repudiate the actions of these professing Socialists against whom it can be quite fairly brought, but the failure of its professors notwithstanding, Socialism still remains as the only hope of the workers.
Posted by Imposs1904 at 10:56 AM No comments: