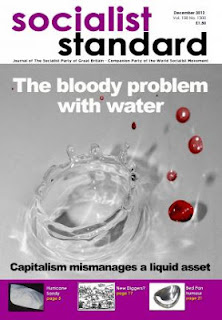 Editorial from the December 2012 issue of the Socialist Standard

As long as human life persists we will be faced with a simple, unalterable fact. We are material beings in a material world. Our lives, our thoughts, our feelings and desires, everything we value and hope to accomplish, no matter how solid or intangible are all made possible only because we have a material relationship with the Earth. Everything we have (and will ever have) to support our lives, we have created by applying our labour to the natural resources around us: the land, its minerals, its watercourses, its produce and its sources of energy. We do all this collectively – we always have: it’s who we are. Our mutual dependence has never been more total than it is today: it now takes the work of millions of people to put a single cup of coffee on a breakfast table every morning.

In our present world, though, the Earth’s resources, which should be the foundation of our material and social wellbeing, turn out to be the source of untold human misery. The cause lies not in the resources themselves, nor even in our relationship with them, but in the relationships we form among ourselves in human society. Private property divides us and forces us into competition with each other for the resources that nature gives freely. The demand for profits puts urgency into that competition and drives it to conflict, open or covert, local or global. It is seen everywhere: in the Brazilian rainforest where indigenous people and activists are killed, maimed and driven from their homes by loggers and mineral prospectors; in the Philippines where the killers are claimed to be the police, the military or the private security forces of the mineral companies themselves; in the Democratic Republic of Congo whose untold mineral wealth has been a source of local conflict for over seventy years, a conflict funded by multinational companies, happy to supply access to arms in return for the vast mineral wealth of the country. We’ve seen it in the huge global conflicts of two world wars, more recently in the oil wars of the Middle East, and now in mounting struggles over the world’s dwindling water supplies. Everywhere!

We find ourselves in a trap. Despite our mutual dependence and our social labour, the world’s resources pass not into collective ownership but into the ownership of a few who have acquired a monopoly over them and over the means needed to work them into the things we need. Competition and the mechanics of private ownership direct those few along the path of private profit and not of social need. So, now, most of us go insecure among great natural and created wealth; we spend our days at work but with no hope of controlling the work we do. We see a potential abundance all about us, but we have to make do with much, much less than we see. To all these things we give a single name: capitalism. None of this is any longer necessary. Isn’t it time we made a change?
Posted by Imposs1904 at 6:07 AM No comments: