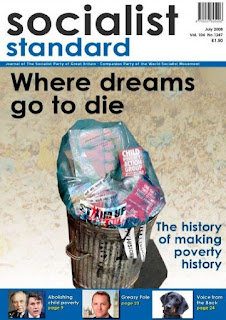 Editorial from the July 2008 issue of the Socialist Standard

Last month both the Chancellor of the Exchequer and the Governor of the Bank of England announced, as they tucked into a slap-up meal at the Mansion House in the City of London, that austerity was returning.

First off was Mervyn King. He warned that real take-home pay would not keep up with rising prices. "It will not be an easy time,“ he said, “and I know that some families will find it particularly difficult.” Alistair Darling made it quite clear that the government was going to help ensure this, declaring that "continued restraint on pay is required from both the public and private sector”.

It’s the same old story. Profits are being squeezed by rises in the price of oil and raw materials and the government is trying to protect them by squeezing wages. This, at a time when wages are themselves being squeezed by rising food prices and gas and electricity bills.

This was not what Gordon Brown promised when he was Chancellor. “My Budget choice is to lock in stability and never put it at risk”. he said when introducing the 2005 budget, “at all times putting Britain’s hard working families first.”

In that same speech he proudly proclaimed that his policies had conquered the stop-go, boom-slump cycle. “Britain”, he said, “is today experiencing the longest period of sustained economic growth since records began in the year seventeen hundred and one.” He wasn’t worried then about rising oil prices. The British economy could take it:


“In any other period an oil price rise of over 100 per cent and rises in industrial materials and metals of around 50 per cent would have led to a surge of British inflation. But inflation - which went as high as 20 per cent in the 1980s and 10 per cent in the early 90s - has, every year in the last eight years, been 3 per cent or less - the least volatile and most stable of all the major industrialised economies.”

Even in his last budget speech as Chancellor in 2007 he was still under the illusion that he had banished the business cycle, proclaiming “that after 10 years of sustained growth, Britain's growth will continue into its 59th quarter – the forecast end of the cycle – and then into its 60th and 61st quarter and beyond”.

He got out just in time. He had been lucky: the up phase of the business cycle in the British economy had happened to coincide with his period as Chancellor.

As socialists who know how capitalism works – how it can’t be controlled by governments and how it can never been made to work in the interest of wage and salary workers – we knew that sooner or later Gordon Brown would have to eat his words. And now he has to.

Now the crunch has come it is not “Britain’s hard working families” that are being put first, but profits. As it has to be, and always will be, under capitalism.
Posted by Imposs1904 at 10:45 PM No comments:

From the Inveresk Street Ingrate blog.

This blog doesn't usually do poetry - see Cactus Mouth Informer for a poetry overdose - but I got a message via MySpace from an Irish poet, Kevin Higgins, advertising his latest collection, 'Time Gentlemen, Please', and I like what I've read of his poetry so far.

"Several of the poems deal with my own past experience as a member of Militant from 1982-94 and throw some critical and satirical light of the Left as it was and has become – the title of one of the poems being My Militant Tendency - while others attempt to deal with the political situation now."

If this interview from the Galway Advertiser is anything to go by, it appears that he has travelled quite a distance from his political past:

“From the age of 15 to 27 I was an active Trotskyist,” he says. “I was the leader of the anti-poll tax campaign in the London Borough of Enfield when I lived there. From the age of 27 until, say, 38, a couple of years ago I thought it was a pity socialism was clearly now not going to happen. I was in a kind of mourning, I suppose. But now I think that, for all its faults, the society we have is far preferable to anything the ‘comrades’ would bring, were they, Lord protect us, ever to stumble into power.”

I'm not using this an opportunity to have a dig at the Millies. It's his take on his former comrades, and obviously plays some (small) part in the poetry he now writes and, to be honest, it's not the first time that I've read (or heard) a former Millie voice their concerns in such terms. I don't think it's a peculiarity of that version of the Fourth International. I'd venture that it's part and parcel of the whole Leninist tradition and, anyway, any politics which mistakenly roots itself in substitutionism should always carry a health warning.

And I'm also self-aware enough to see I wee bit of my youthful self in this poem:

It's nineteen eighty two and I know everything.
Hippies are people who always end up asking
Charles Manson to sing them another song.
I'd rather be off putting some fascist through
a glass door arseways, but being fifteen,
have to mow the lawn first. Last year,
Liverpool meant football; now
it's the Petrograd of the British Revolution.
Instead of masturbation, I find socialism.
While others dream of businessmen bleeding
in basements; I promise to abolish double-chemistry class
the minute I become Commissar. In all of this
there is usually a leather jacket involved. I tell
cousin Walter and his lovely new wife, Elizabeth,
to put their aspirations in their underpants
and smoke them; watch
my dad's life become a play:
Sit Down In Anger.