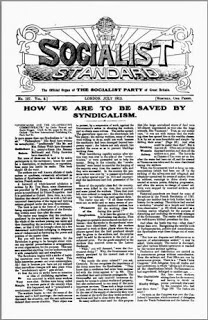 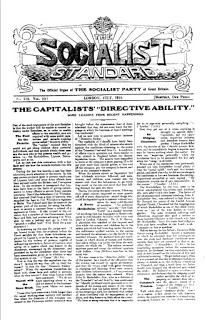 From the July 1914 issue of the Socialist Standard

For many years political quacks and others have been energetically demanding greater efficiency from the workers. The Socialist Party have repeatedly pointed out that the same results follow greater efficiency that inevitably follow the introduction of labour-saving machinery and more up-to date methods.

A moment's thought should convince any sane person. If nine hundred men increase their efficiency to that extent that they can do the work previously performed by one thousand, then one hundred become unemployed. Extend this higher efficiency over the whole of the working class and the number of unemployed increases enormously. The figures used are suppositious, but it is questionable whether the increased efficiency, say of the last twenty years, has not had a far greater effect. Speeding up has become common in every occupation, and unemployment increases in spite of the much-boomed trade prosperity. The theory is proved by practise and experience.

All that politicians and economists do is to reiterate their unsubstantiated assertion that it is a remedy for poverty. They seldom attempt a reply to what most of them know to be the truth. Occasionally, however, a literary desperado with more courage than wisdom, breaks a lance on the solid rock, and as the splinters fly, the poverty and weakness cf capitalist argument are exposed.

Neither is it necessary for the Socialist to rake over the garbage of the gutter Press, or hastily published daily papers.

“The Spectator,” classic defender of the faith, champion, par excellence, of a rotting and useless class— enters the lists against the Socialist indictment.

“The Spectator” has found “the only way." “The Spectator" refers to “the absurd superstition that the increased efficiency of one work man means less employment for another."

“The Spectator,’’ June 6th, 1914, says “A fallacy which can only be answered, as we have answered it many times before, by pointing out that if this proposition were true, it would follow that the best way of making work for everybody would be for nobody to do any work at all."

Deep, profound, almost omniscient must be the wisdom of “The Spectator." Let us try it.
F. Foan
Posted by Imposs1904 at 4:38 AM No comments:

From the July 1915 issue of the Socialist Standard

The Socialist Standard is a high explosive. It shatters error and superstition. 'Nuff said.