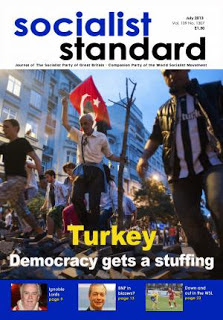 From the July 2013 issue of the Socialist Standard


For some time it has been obvious that David Cameron hates Prime Minister’s Questions and that those who have to fill in his diary must make sure he has unavoidably urgent commitments as often as possible on the fateful day leaving poor Nick Clegg to take the punishment. Not that this exposure allows Clegg to take any glory – the loutish sneers, the contemptuous laughter, the snarling of meaningless 'questions'. Even worse for him, the Deputy Prime Minister has never mastered the Cameron technique of responding to a difficult question with one of his own – very often about something completely irrelevant. This is the Honourable Members at play, enjoying their post-lunch diversion.

Lobbyists
A recently sprouted encouragement of misbehaviour during PMQs has been Cameron's avowed determination to reform Parliament and its ways so that voters whose MP has failed to come up to scratch – perhaps by asking too many daft questions or guffawing too boisterously at an equally daft reply – can have access to a machinery which will force the deficient Member back into the real world by standing for election again. Another scheme is to make it more difficult – for Noble Lords as well as Honourable Members – to accept cash for promoting the cause of some company or pressure group. This is known as Cash For Access – lobbying ministers and the like with rewards which can bring tens of thousands of pounds dripping into the pockets of those pursued by the lobbyists. All of which is in breach of what are called The Rules of Conduct, betraying the promise that whatever influence an MP or a peer might have will be used in the interests of the people they are supposed to represent. This did not, of course, impress the Tory MP Neil Hamilton with those brown envelopes during the Nineties stuffed with cash from Harrods boss Mohammed Fayed, which introduced us to the word ‘sleaze’. When Hamilton was found out he had to resign from the front bench and was then soundly defeated by Martin Bell in the 1997 general election (his constituency is now represented by George Osborne) reducing him to earning his keep by appearing on The Weakest Link or – in the case of his wife – in the TV grovel of I'm A Celebrity...

Noble Lords
Meanwhile the scandal continues. Recently there has been the exposure of three peers – Lords Cunningham (ex-Labour minister – 'Are you suggesting ￡10,000 a month? Make that ￡12000 a month. I think we could do a deal on that'), Mackenzie (ex-police Chief Superintendent) and Laird (the Lords is 'a great place to do business'). And in the Lower House Patrick Mercer, Tory MP for Newark, was so cruelly shown up by a Panorama sting that he felt compelled to resign the Tory Whip to 'save my party from embarrassment' (not to mention his own discomfort) and to announce that he will not stand at the next election. His problem springs from being shown on the nation's TV accepting a down payment of ￡4000 towards a total of ￡24000 to promote a campaign for Fiji to be readmitted into the Commonwealth. The proposals of the bogus lobbyist included forming an All Party Parliamentary Group to press this cause, through questions in the Commons and an Early Day Motion, which was virtually written for Mercer, stating that 'there is no justification' for the islands' continued suspension. Fiji was first suspended in 2006, after being taken over by a military dictatorship. There is no evidence to support the terms of that EDM; the situation is pretty well unchanged, with all that implies in terms of democracy and human rights. Recently the International Federation of Journalists advised anyone thinking of going there as a holiday that it is 'no paradise right now'.

Cameron
This is not the first time that Mercer's ingrown tendency for abrasiveness has landed him on the wrong pages of the media. But in the unforgiving game of Westminster politics, could there have been any darker motive behind his exposure? The son of a Bishop of Exeter, he went to public school and Oxford before Sandhurst and the Army where he rose to the rank of Colonel with awards for 'distinguished gallantry'. But he did not live up to a background so appealing to any Tory activist and he has not turned out to be one of Cameron's favourite underlings. In 2007 he was sacked from the post of Shadow Minister for Home Security after suggesting that there was nothing exceptional in some soldiers being called 'black bastard' and expanding on this by recollecting that among some ethnic minority soldiers he had come across a lot were 'idle and useless'.

In 2001 he supported Ian Duncan Smith in the Tory leadership contest and in 2005 he was for David Davis against Cameron. But it was unnecessary for him to develop the theme by describing Cameron as 'a despicable creature...an arse' and elaborating by telling us that he had '...never, ever come across anyone less suited to the job in my life. I would take a beggar off the streets and put him in that position rather than have Cameron. I loathe him.' These remarks were published in the People: Mercer said they had been overheard and recorded in secret. As if that would have made any difference to Cameron loyalists nursing a desire for revenge on this wayward maverick.

But however incendiary his opinions and manner of giving vent to them Mercer had kept favour with his local Tories. When he first stood in Newark in 2001 his majority was 4073; in 2010, despite all his problems and clashes with the party, it was 16,152. He now sits as an Independent. When we consider the material which is dealt with by Parliament – the endless  obsession with violence, poverty, class privilege, dishonesty – it must be concluded that there is nothing to justify the legislators taking any pride in their work or claiming to be more trustworthy and morally superior than Patrick Mercer and his noble swindlers.
Ivan
Posted by Imposs1904 at 10:09 PM No comments: