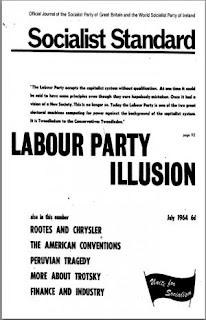 From the July 1964 issue of the Socialist Standard

For some years Russian diamonds have been sold in the world market through the South African, De Beers diamond organisation.

The Chairman of the De Beers Company, Mr. H. F. Oppenheimer, recently announced that the agreement they signed with the Russians in January, 1960, is not being renewed, but that is only half the story. All the sellers of gem and industrial diamonds have an interest in keeping prices high and stable, and in wanting to protect themselves against a heavy price fall, which might happen if somebody broke away and flooded the market with diamonds at cut prices. So although the contract with the company is ended, there is no likelihood of any Russian attempt to undersell the Central Selling Organization which regulates the market. As Mr. Oppenheimer puts it:—


. . .  On account of Russian support for the boycotting of trade with S. Africa, our contract to buy Russian diamonds has not been renewed. These changes will not, however, disrupt the centralised marketing organisation in London, which is essential in the interests of all diamond producing countries, whatever the political differences between them may be. (Guardian, 16 May, 1964).

During the past year the diamond market and the price level were threatened from another quarter, the Congo. Owing to the breakdown of governmental control diamonds were being illegally mined and exported and offered at prices below the world levels. This danger to profits now seems to have passed:


Fortunately, the Congo Government, which risked incurring severe losses, both in taxation receipts and on foreign exchange, is taking energetic steps to restore law and order in the main diamond-producing area with very satisfactory results.

There are no doubt people in the Congo who take a different view about the “satisfactory" nature of these “energetic steps," but as far as De Beers are concerned the whole year was more than satisfactory, total diamond revenue being up by about 30 per cent, at a total of nearly 82 million Rands (about £41 million).

De Beers ran up against other problems with several African governments because it was politically awkward for these governments to allow the locally mined diamonds to be sold through a company registered in South Africa. The solution has been found. All of these diamonds are now bought “by companies registered and managed outside the Republic of South Africa and which are not subsidiaries of De Beers.”

It matters less to De Beers to keep direct control of the subsidiary buying companies than it does to keep up the world price of diamonds, and in 1963/4 they recorded a rise in the price of gem diamonds of about fifteen per cent.

Edgar Hardcastle
Posted by Imposs1904 at 2:46 PM No comments: 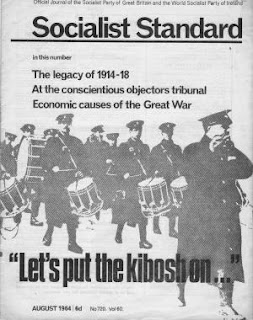 Some Labour Leaders and the War
In an article by Mr. Keir Hardie in yesterday's Pioneer (Merthyr) he says: "I have never said or written anything to dissuade our young men from enlisting. 1 know too well all there is it stake/' (Manchester Guardian, November 28th, 1914.)

I returned about 1.30 and received the Rl. Hon. J. H. Thomas at lunch, a Labour M.P., and head of the Railwaymen's Union. I found him a broad-minded patriot. Most anxious to help and fully alive to what the gentry of England have done in the war. He is a great admirer of Asquith. . . (The diary of Sir Douglas Haig, Commander of the British forces in France. October 31st, 1917.)


Ruthlessness
Nothing for which the masses of our people have ever striven is more important than that they and all of us should win in this tremendous war against the ruthless military caste . . . that menaces the rights and freedom of mankind. (H. M. Hyndman. writing in the Daily Dispatch, July 7th. 1915.)

Sir Douglas Haig's diary far the same day shows that ruthlessness was not confined to one side. . .


At 11 o’clock Lt. Col. Fowkes. RE., called on me from G.H.Q. regarding the use of asphyxiating gas. I said better wait until we can use it on a large scale, because the element of surprise is always greater on the first occasion.


The First Casualty
It is difficult to imagine what could be more despicable than the attitude of the capitalist Press during the past year. The persistent and ever more complete suppression of truth, the distortion of facts, the hypocrisy, the false and maudlin sentiment, and stupid advice to the workers, the idiotic praise of everything British and the belittling of the same thing when done by the alien, all make it increasingly obvious that the “glorious institution”, the capitalist Press, is one gross insult to the intelligence of the people. The Socialist Standard. September, 1915.)

It would be an admirable thing if all unmarried men between 18 and 30 without the manhood to offer themselves, were forcibly pressed into the Army and put into battalions where the kicks should be far more than the ha’pence. (The Daily Express, August 20th, 19I4.)

God’s Purposes and the War
It is God's leading that we are following now. War is the instrument through which God is working out his own purpose. (Canon Alexander of St. Paul’s. Standard, August 25th, 1914.)

And this is what the war really meant. . .

. . . some have gone into dug-outs to try to get a few hours sleep, but this is almost impossible, for the earth shakes from the vibrations of the artillery. The lice crawl all over the body, driving one nearly frantic, and the rats are in swarms and run over us. But there are some corpses lying out on the top, with plenty of rats around them, so they won’t go hungry. (A Soldier In The Trenches, The Ploughshare, March, 1917.)

The War for “Freedom”
The Daily Mail wants the names of every known pacifist or active friend of Germany in your city, town or village . . . the names of every speaker or writer who favours Germany, with all you know about the source of his income, the societies to which he belongs, and the relations he has, or has had, with Germany. (The Dailv Mail, October 25th. 1917.)

Talking about Homes . . .
It is a pitiful thing to think of, but thousands of these brave men of ours have belter homes in the trenches of Flanders than in the sunless alleys of our Motherland. (Arthur Mce, writing in Lloyd’s News, March 26th, 1916.)

Sir Derek Keppel (Master of the King’s Household) arrived and went round to inspect several Chateaux considered suitable for the King’s occupation. He fixed one which (for secrecy) is to be prepared for me. Derek is enjoying himself so much that he has asked to stay another day. (The diary of Sir Douglas Haig. Commander of the British forces in France. August 2nd, 1916.)

Marching on whose stomach?
We then went to Poperinghe. It was now past 2 o’clock, so we stopped and had lunch near some stacks on the road south of Steenwoorde. A party of refugees passed us and a well-dressed woman and a man came up and asked if they could go by Tournai to Brussels. . . . They had walked all the way from Ostend with a basket on the arm or a pack of clothes on their backs. All that was left to the poor things of their property. . . . I gave them 2 doz. “Oxo’’ soup squares for which they seemed most grateful. (The diary of Sir Douglas Haig. Commander of the British forces in France. October I7th, 1914.)

Prince Arthur of Connaught arrived with the Crown Prince of Servia. . . . Lunch lasted two hours and all enjoyed themselves hugely. (July 7th, 1915). We had coffee after lunch in my writing room, and Joffre enjoyed himself so much that it was 2.20 p.m. before he went. . . . They are, indeed, difficult Allies to deal with! But there is no doubt that the nearest way to the hearts of many of them, including that of the “Generalissimo”, is down their throats, and some 1840 brandy had a surprisingly smooth effect on him and Castlenau! (May 26th, 1916.)

A PRAYER FOR THE TROOPS
by Alderman Henry F. Morriss
Keep the Officers who lead us; help us all to render them cheerful obedience. May we all endure hardness, as good soldiers of Jesus Christ. When suffering or death comes to us. may the Holy Comforter be as a friend at our side. Grant us speedy Victory over our Enemies; if it be Thy Will. God save the King, the Queen, and all the Royal Family. Give wisdom and courage to all who control the affairs of our Empire. Bless all our Allies, and save them and us with Thy Great Salvation; through Jesus Christ Our Lord. Amen