Socialism and freedom of thought (1984) 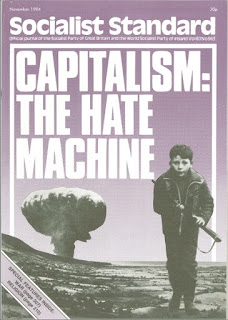 Like it or not, this is George Orwell's year and Big Sister is watching us. Is what we are writing prohibited? Are we indulging in crimethink? Well, Orwell's Newspeak, the systematic reform of language making impossible any thoughts dangerous to the state, has not come about, even though under Thatcherspeak any criticism of the leader is out of order. So how free are your thoughts, comrades and enemies?

Exploiting freedom
For the working class freedom of thought is no problem. Across machines on the shop floor, around the coffee vendors and over the counters the working class of Britain freely express their views on all the personalities in the news, using what was described by Orwell as the filthiest language in the world. Amid the current debate over whether the media prescribes upper class culture to the masses or distortedly reflects working class culture, it's the really vulgar piss-takes of our betters that grab me. In a world where humour was a hundred per cent effective Orwell's observation would have been true - the antidote to an army of goose-stepping jackboots is a laughing raspberry. But it is not so. The unorganised and undisciplined freedom of thought displayed by the working class presents no problem to the democratic capitalist states (although it may be.a problem to the states Orwell called totalitarian); it just becomes institutionalised in risque comedy and semi-legal journals like Private Eye. Revolt is respectable when it makes money by the normal channels.

Anything goes then. Except that the protestor may often lament:

"Look what they've done to my song,
It's the only thing' I ever did half right
And it's turning out all wrong!"

Orwell's problem
What's it like on our side of the fence? The enemy of free thought may not only be the state; it may be imposed from within and come with the acceptance of a political allegiance. This was Orwell's problem. Since 1934, he said, everything I've written has been for democratic socialism and against totalitarianism. When Animal Farm was in the press he described it to a friend as a squib that was politically not okay. Insofar as Animal Farm parodies the Russian revolution it was okay by Orwell's political preference for democracy and the milk and water of the ILP. But if taken to suggest that any change in the capitalist farmyard is doomed to failure and corruption, then it is not okay, neither by Orwell nor by us. However taken, the maxim of the creative writer (also of the muck-raking hack) is "publish and be damned". Orwell's feeling was that the creative springs of a writer dried up in the pursuit of a party line. He was not alone. Barltrop, writing in The Monument, puts into the mouth of ex-socialist Bob Reynolds the saying, "Bah! You can't think in Organisations!" Yet it is easy to find many writers for whom the opposite is true.

While writing the anarchic and cynical poetry of The Waste Land, T.S. Eliot was putting together his notes on the possibility of poetic drama; concluding that such a thing was impossible without a central directing mythology shared by the writer and an audience. A decade or so later he was received into the Anglican church and realised his poetic drama in Murder in the Cathedral and Four Quartets - manifestly better poetry than his earlier work, although in content drivel to we unbelievers.
In an era before party politics Shakespeare toed the line of patriotism and reverence for monarchy. His work is shot through with gorgeous bombast about the nation and the holiness of the crown that ruled it. Indeed, many of his major plays lose their coherence if you discount his line. Contrarily, the puritans in revolt against kingship produced a flood of literature and their heir John Milton wrote at least two books of very powerful blank verse about imaginary characters in the wildest setting. There were then at least three committed individuals who could write.

Roads to freedom
Neither current nor historical examples suffice to help you decide on this question of free thought versus political allegiance. It is something all writers must try for themselves and may not even be easy to identify, as it is possible to mistake the drying of the creative spring for political caution in the pen. Orwell's solution to the problem may be helpful here.

From early on Orwell's journalism has a strong political slant; but his novels of the period are, on his own admission, mostly potboilers with slight political orientation. His political and creative writings were divorced from each other. Not only this. When you examine Orwell's essays and journalism up to 1945 you find an incredible mixture of way out Trotskyism alongside outrageous nationalism. Orwell welcomes revolt in the streets and blood running down the gutters, then asserts that "England, my England!" does more than bring a lump to our throats, for:


"The suet puddings and the red pillar boxes have eaten into your soul and this side of the grave you will not escape the marks they have left upon you."

Orwell's creative and political writings are in tension here, as are his personal politics. He is a professed democratic socialist who writes turgid novels with slight political significance and he is a professed patriot who writes political essays in favour of violent insurrection for the good of the country. Orwell obviously wanted to change society, but was unclear as to how to do it and feared the consequences. So he wrote about socialism gone wrong. His tensions were resolved with the writing of Animal Farm and 1984.

I do not wish to impute this to Orwell as the only motive for his writing, but offer it as a plausible analysis to introduce the questions which a real socialist in the SPGB faces over freedom of thought.

Class freedom
The social preoccupations of writers may lead them to concentrate on the conditions of work in a particular industry, as with Zola's Debacle and Sillitoe's Saturday Night and Sunday Morning. Other writers may be so little concerned with social matters as to write novels almost wholly devoted to the internal lives of the characters they have created, Virginia Woolf's To the Lighthouse is an instance. Writers who are concerned with the internal troubles of their own creatures are obviously "free" to write as they wish; but as their focus is away from the social and on to the individual it is likely they will take the current social arrangements for granted and strive for a fit between society and characters at odds with the world. Some of Pinter's plays display this focus and development. The freedom of such writing is often scorned as "bourgeois freedom", because such writers are apt (precisely when they are most free) to reproduce unreflectively the prejudice of an age.

A marriage of these two concerns is possible. Franz Kafka conducted his bewildered characters through such a complicated parody of East European society in the 1920s as to fuse the social and the internal into the life of The Castle. Writers concerned with social conditions, and particularly those who work from a committed position, deliberately restrict themselves as to subject and so are unfree. But they can temper their unfreedom, especially when they are concerned to push society in a certain direction. For the revolution which they seek - once set in motion - will endow their work with prophetic and revolutionary powers. It will have been about future society.

The committed writer in the SPGB works for the freedom of a class and claims that, with the emancipation of the working class, all reactionary utopias will cease to have any dynamic meaning. For the creative writer it is a matter of weighing up the importance of projects. The project of socialism is by definition social, the project of the writer is by definition individual. At the social and democratic level you have a right to hold views when the majority are swayed by them, if not then your individual view is subordinate to the majority, always assuming that time and consciousness will produce a socialist revolution. At the individual and creative levet you have a right to any view, always assuming that time and consciousness will turn your creation embodying those views into "literature". Which, then, is most important to you?

Socialist freedom
In practice the focus which socialism gives to a writer may hardly be felt by some, but may seem very intrusive to others. Members of our party have written plays for children, fairy stories, revenge novels, linguistic philosophy, articles in women's magazines and technical stuff, in addition to political comment. Some, by adopting another persona, even get a sort of living out of fiction with a social twist. A few find intolerable the need to watch for deviations from the party line when writing what they really think, so they leave us, convinced that the party is 'a dictatorship over thought. Which is a pity. Writing for socialism is not in principle different from writing within a genre - as with the Spenserian stanza or the five act play - in each case you strive for an effect within a form. But neither the existence of free-floating discussion in consciousness-raising groups, nor the success of formless literature such as some of the Beckett plays prove that socialists will multiply if we relax and open our columns to the querulous. Outlets for socially aware writing of uncertain political direction are many, but there is only one Socialist Standard and we are determined to keep it free from non-socialist thought.
B.K. McNeeney
Posted by Imposs1904 at 3:54 PM 1 comment: