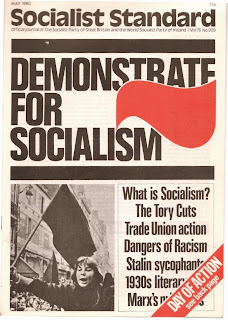 From the May 1980 issue of the Socialist Standard

Although the furore over Anthony Blunt has died down the question still remains: why did people like him swallow the "Russian Myth" so easily? We might ask this especially about other members of Blunt's generation and social background who were involved not in the visual arts but in the literary world. The pro-Communist sympathies of the literary left-wing did not amount to sustained and covert acts of treason but they allowed their ideology to govern their lives and work for the best part of a decade - and this did not stop at deception and the telling of lies.

In order to explain why these writers mistook Russian Nationalism for socialism it is necessary to appreciate the peculiarities of their approach to politics on the one hand, and the common characteristics of their background and culture on the other. First, who were the protagonists in this political tragedy and what was their contribution to the history and literature of the nineteen-thirties?

At the heart of the 'thirties literary movement, which comprised writers born during the first two decades of the twentieth century, was the Auden Group which emerged from the atmosphere and tradition of Bloomsbury. The group included the poets, Stephen Spender, C. Day Lewis and Louis MacNeice, along with the novelists, Christopher Isherwood and Edward Upward who were attracted to the most promising poet of the period, Wystan Hugh Auden. Malcolm Muggeridge and Kingsley Martin also had strong connections with a definite intellectual tradition, that of the eminent Fabians. Muggeridge by virtue of his marriage to Beatrice Webb's niece, Kitty, and Martin through his position as Editor of the "Staggers and Naggers" - The New Statesman and Nation. Theoreticians such as the Labour politician John Strachey and the bright young Communist Christopher Caudwell contributed to the ideological justification of Communist politics in Britain; the former in his The Coming Struggle for Power and other theoretical works published by the Left Book Club of which he was a leading light, and the latter in Illusion and Reality, which attempted to apply Historical Materialism to the evolution of poetry. Claud Cockburn and the Hungarian journalist Arthur Koestler were hard-headed Communists who, under the orders of their Russian masters, sent fabricated news-stories to England during the Spanish Civil War. Indeed, Cockburn wrote under the slightly more proletarian name of Frank Pitcairn, while Koestler kept his membership of the Communist Party a complete secret while working as a reporter for the right-wing Hungarian paper Pester Lloyd. The two heretics of the literary left-wing were Julian Symons who became a Trotskyite during the 'thirties and George Orwell who viewed Stalin and Trotsky in the same critical light and described Russian Commissars as "half gangster, half gramophone".

The key to their left-wing sympathies can be detected in the official statistics of the period. It was a decade in which unemployment peaked at nearly three million in 1933; the Ministry of Agriculture revealed that 20 per cent of the nation's children were badly fed and Seebohm Rowntree claimed that 30 per cent of the city of York were living below the poverty line. The social conditions of the 'thirties are more poignantly illustrated in the following three extracts. Greenwood's piece from Love On The Dole was written by someone who was brought up in the conditions described; Orwell was fortunate enough to be a mere visitor to the industrial North; Day Lewis' poem could easily have been constructed by someone who had only read about such things in the press.

" . . . and to find the cost of this present system you only have to at our own lives and the lives of our parents. Labour never ending, constant struggles to pay the rent and to buy sufficient food and clothing. And the houses in which we are compelled to live are as though they have been designed by fiends in hell for our especial punishment. Even at best I say it is not a life." Love On The Dole by Walter Greenwood

"She looked up as the train passed and I was almost near enough to catch her eye. She had a round pale face, the usual exhausted face of the slum girl who is twenty-five and looks forty, thanks to miscarriages and drudgery; and it wore, for the second in which I saw it, the most desolate hopeless expression I have ever seen." The Road to Wigan Pier by George Orwell

"The hooters are blowing,
No need let them take;
When baby is hungry
'Tis best not to wake.

Thy mother is crying,
Thy dad's on the dole;
Two shillings a week is
The price of a soul."
A Carol by C. Day Lewis.

The nineteen-thirties was the decade of social surveys and "Urban Rides" undertaken by a variety of writers, political activists and social scientists including Orwell, Rowntree, Wal Hannington, J. B. Priestley and Aronld Zweig, to name a few.

Running throughout the work of the literary left-wing - almost without exception - is a pervading sense of guilt which has three elements. The dominant of the three was the over-riding belief that they, born into the homes of small businessmen, shopkeepers and civil servants, educated at public school and in most cases Oxbridge, were, to use Upward's phrase, "Living off the backs of the workers". Somehow they were responsible for the worst features of the capitalist system. It was almost as if one particular phrase of Lenin's was taken to heart above all others.

"How could they be so blind as not to see that our enemy is the small capitalist, the small owner? In the transition period from Capitalism to Socialism our chief enemy is the small bourgeoisie, with its economic customs, habits and position."
The Chief Tasks of Our Times

Lenin, of course, was referring to Russia in an attempt to direct attention away from the bigger and more powerful capitalist institution - the State. here is an example of a political expedient in one country becoming a precept of political theology in another. This aspect of Communist propaganda implanted itself on the already guilt-stricken consciences of the literary intellectuals. For they had already inherited from their school days a sense of shame that they had been too young to test their manhood in the Great War. In addition their childhoods had been scarred by sexual and emotional trauma.

Upward described Repton School - unaffectionately referred to as "Reptile" - as being rotten with "a foul and vicious kind of sexuality" during his time there as a pupil. Orwell recounts the mental and physical cruelty of his Eastbourne prep school in Such, Such Were The Joys. Spender says that his parents might just as well have had him "educated at a brothel for flagellants" and Isherwood claims that his "middle class" upbringing denied affection and taught that sex was "the loathsome charnel house, the bottomless abyss and its natural outcome was paralysis". The political implication of these experiences is succinctly expressed by W. H. Auden:

"The best reason I have for opposing Fascism is that at school I lived in a fascist State."

The lure of Russia, the call of the Popular Front and the fight against Fascism took on a new and personal perspective. The literary left-wing chose a number of ways to try to expiate their class-guilt (for example Orwell became a tramp), but most chose to join the Communist Party or become fellow travellers. This was far from an easy defection as they all experienced particular inhibitions in their dealings with the "working class". Muggeridge compares the fascination of the intellectuals with the workers to a small dog passing a big dog, half wanting to smell its bottom, and half afraid. It is worth commenting that their political needs were largely emotional rather than intellectual. They felt guilt but they did not "feel" Communism. It was an uncomfortable veneer which did not fit easily, and it required a great deal of their mental effort to convince them that it did.The contradictions inherent in Russian Communism were mentally accommodated but without realising that the paradoxes originated with Lenin not Marx. Therefore when they finally cast off the ill-fitting Communist mantle it was "human nature" that got the credit for the failure of this political exercise, and Marx who got the blame. This conventional conclusion is presented in Martin's autobiography under the heading of "Left Illusions" and in the infamous compilation by ex-Communists, The God That Failed. However their excuses are not historically accurate.

The anti-marxist foundations of Bolshevism have been highlighted in some detail by revolutionaries like Rosa Luxembourg and more recently by academics like Maximilian Rubel[1], Frederick Bender[2], and Paul Mattick[3]. Even raymond Willaims in Culture and Society and Robert Conquest in The Great Terror have been referred to the expedient innovations of Leninism. Yet it is precisely the flawed assumptions of the Bolsheviks which ensured the political betrayal and eventual disenchantment of individuals who could not stomach the rigours of power politics.

Lenin differed fundamentally from Marx, in his insistence that socialism could be established in a pre-industrial economy and that a socialist revolution could be initiated without the participation of the working class as a whole. These modifications required the redefining of socialism and the economic criteria of class so as to fit in with the economic conditions of Russia. It was this last alteration which enabled the Russian Communists to successfully dupe the literary intellectuals.

In the Communist Manifesto Marx declared:

If they had read Marx the literary left-wing would have realised that they too were workers by virtue of their occupations as journalists and teachers. Their bourgeois "customs and habits" were not sufficient in themselves to constitute membership of the capitalist class. Like all other workers they stood as "non-owners" in relation to the social means of production.

Lenin insisted that the working class consisted only of industrial labor, a mere section of all wage-earners, and the party that represented their true interests did not consist of "the working class itself" but a minority of professional revolutionaries - Lenin's vanguard of the Proletariat. Lenin's contrived view of class gave rise to further inaccuracy and confusion in the writing of the literary left. In the work of the most promising young neo-Bolshevik, Christopher Caudwell, this revised view of class is taken to its most illogical extreme.

"All classes injured by the final explosion of capitalism - workers, peasants, small farmers, shopkeepers, artisans, artists, specialists, technicians - compose that rebellious mass . . . but only one class is organised by its conditions of life to overthrow the old system and build a new."
Illusion and Reality

The literary left-wing believed for a time that capitalism would finally collapse and that their own involvement was of little importance in the face of the inevitable, but at least they were on the side of history.

It is ironic that contained in the speech that was to shape the political commitment of a whole generation of young artists was the admission that should have exposed Lenin's opportunism for what it was - not the way to socialism, but a road to disenchantment and despair.

"State capitalism would be a step forward for us."
The Chief Tasks of Our Times