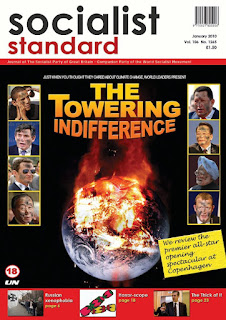 Editorial from the January 2010 issue of the Socialist Standard

Two thousand years ago Emperor Nero reputedly stood on the private stage he had had built in his palace and played music while his city burnt around him. A thousand years later Copenhagen's King Canute tried to command the tides to impress his subjects. Plus ca change: last month, despite intensive efforts, the expensively-assembled representatives of global capitalism spent two weeks in Copenhagen fiddling while the planet warmed, and the sea-level rose.

But despite appearances to the contrary, capitalism enters a new decade in rude health. The economic disruption to production and the credit system of the last two years may have been severe, but it is a necessary consequence of the need for the market system to maintain its essential objective, that is profitability at all costs.

Against that imperative, millions of jobs globally are being sacrificed. The spending promises of politicians around the world are being revised and reforms abandoned. Schools, housebuilding and hospitals are shelved as a consequence of the massive diversion of financial resources into propping up the house of credit cards that drove capitalism for much of the last ten years.

The decade started with a mini-slump in most western economies - relating to the high-tech and internet sectors primarily - and has ended with an almighty "correction".

Politically the decade also started with global capitalism in some apparent disarray as protesters closed down the WTO trade talks in Seattle in the last days of the 20th century and in the process gave birth to a movement of sorts under the banner of anti-globalisation and (less commonly) anti-capitalism. These back-slapping/back-stabbing summits have been a regular occurrence over the last ten years as the political whores who serve the interests of the global pimp class battle it out over their respective pitches.

And so the much-heralded Copenhagen climate change conference in December all but collapses. Despite their best effort, our leaders, decision-makers and opinion-formers (various democrats, dictators, corporate flunkies, sycophants, charities, popstars and other hangers-on to the coat-tails of capital) singularly failed to find a way to reconcile the differences between the old (developed) capitalist nations in decline and the developing nations on the up. It's like picking sides in an argument between the neighbour on one side who has always thrown their rubbish out the window onto the street, and the other neighbour who is threatening to start doing the same. Capitalism in 2010 may have fewer emperors and kings, and its subjects are becoming harder to impress, but the end result is much the same

The last ten years then have seen an undoubted decline in confidence in leaders and in "capitalism" (albeit loosely defined). Entering 2010, the task of socialists - and anyone sympathetic to the case for a radical, democratic, participative change in society - is to further undermine the shaky ideology of capitalism, to challenge the ideas which encourage the majority to continue propping up this system, and to clearly put forward the case for a moneyless, wageless, stateless and classless global society.
Posted by Imposs1904 at 8:47 PM 1 comment:

There was a time when sport was supposed to be a pleasant physical exercise. The popularity of association football inside capitalism made it an activity much adored by workers too unfit to play it themselves, but keen to follow the efforts of their local sporting heroes. With the development of capitalism football has just become another business opportunity. Its development more likely to be followed by financial journalists rather than football ones.

"Manchester United is exploring a bond issue as part of efforts to refinance its £700m debt, with the English Premier League champions in talks with two banks about how to reorganise its borrowings. JPMorgan and Deutsche Bank are advising the football club on its options. It is one of a number of clubs whose debts have alarmed football authorities. People familiar with the situation said the options under consideration included the issue of high-yield bonds. These would be used to refinance bank debt or payment-in-kind notes – an instrument that allows borrowers to roll over cash interest payments – which helped Malcolm Glazer, the US sports franchise owner, and his family take over Man United in 2005 in a £790m leveraged buy-out. The club would be the latest company to take advantage of the recovery in bond markets to refinance debt." (Financial Times, 2 January)

Every activity that capitalism touches it turns into commodities. 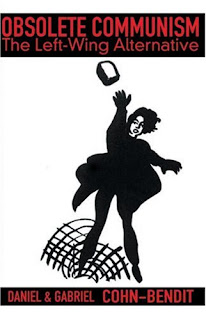 Book Review from the November 2001 issue of the Socialist Standard

Books written by participants in events are always interesting if only because they are part of the documentary evidence as to what happened. The book by Daniel Cohn-Bendit, who was prominent in the student movement which led to the "May events" in France in 1968, and his brother Gabriel (who wrote the theoretical parts) is no exception. Written in 1968 shortly after the events, and now republished by AK Press, it gives a good insight into what many of the radicalised students thought.

The Cohn-Bendits called for a revolution without leaders to abolish the wages system. They were therefore implacably opposed to Leninism and its concept of a centralised vanguard to lead the working class. A large part of the book in fact is devoted to exposing, on the one hand, the French Communist Party (PCF) and its claim to be the sole legitimate representative of the French working class and, on the other, how the Bolsheviks, under Lenin and Trotsky, introduced state capitalism into Russia, with their vanguard as the new managerial ruling class imposing one-man management in the state-owned factories and bloodily suppressing working-class resistance in Krondstadt in 1921. In fact the English title does not convey the full anti-Leninist significance of a literal translation of the original French title – Leftism: Remedy for the Senile Disorder of Communism – which was an obvious play on the title of Lenin's 1920 pamphlet Leftwing Communism: An Infantile Disorder.

The rest of the book is devoted to describing and analysing the events themselves – student occupation of the universities, street battles, followed by a general strike with many factory occupations involving at its height some 10 million workers – and including a good analysis of the role of universities under capitalism (to train cadres to run industry and the state on behalf of the capitalist class).

A revolution without leaders to abolish the wages system? Implacable opposition to Leninism and all its works? We can go along with that; in fact it's what we have always said and done. But that's as far as our agreement can go. The Cohn-Bendits envisaged "the revolution" as involving the overthrow of the government by mass street demonstrations and the occupation, and then the running, of workplaces by the workers. They argued that this could be sparked off by a "militant minority" provoking the state to drop its mask, as the students did by occupying the universities and provoking the police to try to dislodge them. In fact, they imagined that they nearly sparked off such a revolution, if only the students and others had taken over the finance and education ministries on the night of 24 May and if only the workers had had the self-confidence not just to occupy their workplaces but to have restarted production under their own control and management.

If only. Such a scenario would only have had any chance of working if workers were already socialist-minded; but they weren't. This is not to say that the workers in France in 1968 were not discontented, nor that they should not have gone on strike. But it was discontent with their treatment under capitalism, not with capitalism as such.

The Gaullist regime, installed in 1958 following a mutiny by the army in Algeria, had imposed a virtual wage freeze for ten years and the employers had managed their businesses in a particularly authoritarian way. The PCF and the trade union federation it controlled, the CGT, tried to keep the issue as one of economic demands (higher wages and benefits, more consultation of workers, etc). The Cohn-Bendits criticised them severely for this but, ironically, when the PCF did finally introduce a political element by calling for a change of government (not what the Cohn-Bendits wanted of course) they played into De Gaulle's hands. He immediately called an election on the theme "Who governs: Me or the Communists?" and got the answer he wanted.

Ironically too, although views such as those expressed here by the Cohn-Bendits got a boost, the main conclusion that most of the "militant minority" drew from the failure of May 1968 to overthrow capitalism was that this was because there hadn't been a strong enough vanguard party to direct the events. After 1968 Leninism, in the form of Trotskyism, Maoism, Castroism, Guevaraism, Ho Chi Minhism, flourished as never before and, although such views are now not as popular as they became in the 1970s, we are still suffering from this legacy.

While his brother Gabriel remained an anarchist, Daniel Cohn-Bendit eventually abandoned the claim to be a revolutionary to become an open reformist. He now sits as a Green Party member of the European Parliament. Clearly he was wrong to have gone reformist, but at least he now recognises that a "militant minority" cannot provoke a non-socialist-minded working class into carrying out a socialist revolution.
Adam Buick
Posted by Imposs1904 at 2:19 PM 1 comment: