Book Review: The Origins of British Bolshevism by Raymond Challinor (1978) 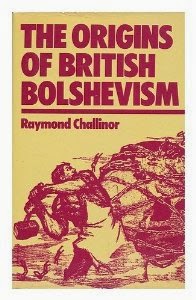 Book Review from the February 1978 issue of the Socialist Standard

Starting out, in 1903, under the influence of the American orator Daniel De Leon, the SLP was anti-parliamentarian and advocated Industrial Unionism by means of which the workers would "take and hold". With the establishment of the Leninist dictatorship, the SLP swallowed (with some hesitancy) the Russian pill. Its paper, The Socialist, declared: "The theories of Lenin . . . are similar to those advocated by the SLP", and: "For years the SLP has been sneered at, but now Russia, in the transition towards the Socialist Republic, shows the SLP is right". (The Socialist, March 1918)

As his book deals only with what he calls British Bolshevism, perhaps Prof. Challinor may be excused his complete omission of any mention of the SPGB's stance on the Russian upheaval which was the opposite of the SLP's: from the beginning we said there will be no Socialism in Russia.

The subsequent revelations of the intrigues and manoeuvres of Bell, MacManus and Paul to wheel the entire SLP into the new Communist Party; the exposure of the lavish distribution of Russian funds by Theodore Rothstein, in 1920 a Comintern agent but in 1907 a Menshevik (who wrote in Justice, the SDF paper: "Is there any sane man who doubts that the present Russian Revolution cannot lead to Socialism?") Willie Gallacher, returning from Moscow to break up SLP meetings and economics classes of those who would not join the CP (Yes, they were doing it in 1921!) terminating in the utter and complete failure of the CP (using Leninist tactics) to capture the Labour Party—all these make pretty gruesome reading. By 1923 the original SLP contingent were ousted and pensioned off and replaced by Harry Pollitt and Palme Dutt.

The sorry truth of the ignominious failure of the CP now finally exposed, its ridiculously inflated membership figures (for Russian consumption) admitted by Klugman (the party's official historian) never to have exceeded 2/3,000 - but making much noise with 2/3,000 paid organizers, speakers, writers and agitators and numerous "front" organizations. Most pathetic of all is Prof. Challinor's conclusion. Seeking to teach others, he has learned absolutely nothing himself from the SLP's destruction in the Russian disaster. Bemoaning the passing of a party which started out in rebellion against the reformism of the Social Democratic Federation as a group of worker-stalwarts trying to master and teach Marxism as they saw it, but getting caught up and destroyed by Bolshevik intrigues, our Prof. actually repeats word for word the same dreary rubbish the Trotskyists of various shades have regurgitated for years: "Smashing the State", "Soviets", "Build the Vanguard" etc etc.

The lessons are, he says: "Work with the Trade Unions for Workers' Control"; "Build the movement for independent working class education" and "The need for a new type of working class party to act as a vanguard" because the SLP evolved the Bolshevik approach independently of the Russians (p. 281) - despite the fact that his whole book is just an obituary of the SLP which actually took this line. But it's quite a good read. 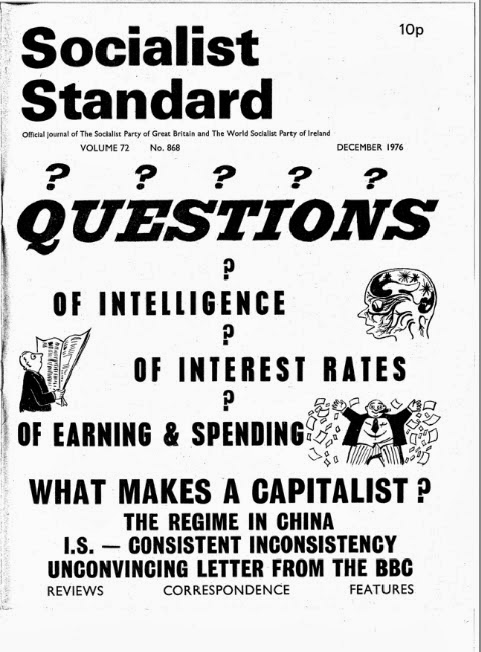 From the December 1976 issue of the Socialist Standard

The Saturday afternoon meeting of the Socialist Party at Glasgow's Exchange Square was "honoured" by the attendance of some members of the International Socialists who, not having a meeting of their own to bore people with, decided to latch on to ours instead. Immediately, our speakers were taken to task for not doing anything about "the current urgent proble facing the working class".

"Unemployment. You never protest against these problems!"

"Wrong", the speaker replied. "That's precisely what I am doing this afternoon: protesting not merely against unemployment, but all the problems the working class as a whole suffer directly under capitalism".

"But that's not positive enough. What you should be doing is getting out on the streets and marching. That gets definite results."

"Yes, sore feet. Don't you understand the basic ABC of capitalism? Employers employ workers to produce commodities. If they can't be sold on the world's markers to realize a profit for the owner, then he will have no alternative but to close down his factory."

"We would occupy that factory", the critic asserted.

"They tried that in an Italian car factory", said the SPGB speaker. "Then they made a brilliant discovery: you can't eat tyres or drink petrol. So they simply came back out".

"But they would be assisted by their fellow trade-unionists".

"All that would result in", said the speaker, "would be a factory full of unpaid night-watchmen". He added, on the question of the so-called "right to work": "Unemployment can't be solved by making slavish demands for an alleged 'right' which doesn't exist. Neither can any tangible difference be made by screeching at trade-union leaders or throwing sticks at Callaghan's car. How illogical can you be in the IS? First you urge the workers to vote the Labour Party into power - then, when they do get in, you attack them for doing what you voted them into power for: running British capitalism!"

"Tactics, comrade, tactics", the IS member explained. And, with a straight face, he said: "What you've got to do is show the workers the utter futility of voting for the Labour Party, by telling them to vote Labour. That way they experience how awful the anti-working class Labour Party is".

Trying to prevent himself reeling dizzily off the platform, the SPGB speaker said: "What will happen if you put up candidates at the next election? Will you urge workers to vote Labour in constituencies where you are contesting?" This brought the discussion round to the fact that, despite their avowed anti-parliamentarianism, IS were contesting the election at Walsall. This mental somersault was defended with the claim that workers, disgusted with the National Front, would turn instead to them!

The speaker told the audience that the SPGB had tried to debate with the National Front but the meeting was broken up by "freedom-lovers" who were against the free expression of opinions - including members of IS. Apparently as the only reply they could think of, one of the IS group said: "Do you mean that you actually debated with people like the National Front?"

"We debated with IS too", said the speaker. "The way to defeat organizations like the National Front is not to suppress them but to have them express their views and then expose them for the gibberish they are. Once armed with Socialist knowledge, no worker will allow himself to be led up every blind alley demanding the thousand-and-one 'urgent' reforms which only ensure that capitalism stumbles on a little longer".

Exeunt IS members shaking their muddled heads, perhaps trying to clear them.
Tone.
Posted by Imposs1904 at 9:55 PM No comments:

From the July 1972 issue of the Socialist Standard

In the eighteen-seventies Bismarck, Chancellor of Germany, went in for a big programme of nationalization, both because it suited the needs of the German ruling class and because he hoped thereby to win support among German workers who confused this state capitalism with Socialism. As Bismarck said to his Conservative supporters in the Reichstag, they "shouldn't be afraid of the word Socialism". Reformists all over the world walked into the trap and in Britain propaganda misrepresenting nationalization as Socialism was carried on by the Fabians, the Independent Labour Party and the Labour Party. Only the Socialist Party of Great Britain, from its formation in 1904, urged the workers not to waste their efforts on something so useless to them and to the Socialist movement. The advocates of nationalization made all sorts of extravagant claims for it - higher wages, greater efficiency, lower prices, and that as the workers would feel that they were working "for the community" strikes would disappear.

Bismarck's policy was written about by Frederick Engels in Socialism, Utopian and Scientific:

But of late, since Bismarck went in for state ownership of nationalised industrial establishments, a kind of spurious Socialism has arisen, degenerating now and again into something of a flunkeyism, that without more ado declares all state ownership, even of the Bismarckian sort, to be socialistic.

Engels went on to point out that state ownership "does not do away with the capitalist nature of the productive forces . . . The workers remain wage-workers - proletarians. The capitalist relation is not done away with."

One of the people who fell for Bismarck's "spurious Socialism" was Lenin. In his The State and Revolution (1917) he had this to say:

A witty German Social Democrat of the seventies of the last century called the Postal Service an example of the Socialist economic system. This is very true.

It was in this section of The State and Revolution that Lenin urged the Russian workers that what they needed was to apply the German Post Office model to Russian industry, but with all official, technicians etc. to be paid "a workman's wages". Like the British nationalized industries under Tory and Labour government all idea of avoiding the ordinary wide inequalities of pay has long since been abandoned in Russia.

Following Lenin's advocacy of "spurious Socialism", the British Communist Party has continued to mislead the workers by telling them to waste their efforts on securing an extension of state capitalism.
Edgar Hardcastle