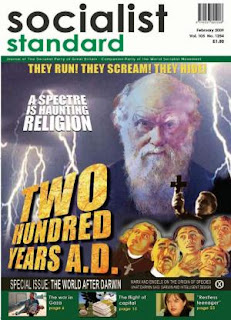 From the February 2009 issue of the Socialist Standard

A young relative was recently expounding his reasons for wanting to do well in upcoming examinations. A place at a good university with the aim of high-level entry to the armed forces and training as a helicopter pilot. He wanted to “make a difference” in Afghanistan or Iraq, to “do his bit for his country.” One would hope by the time he was old enough and suitably trained that both of these conflicts would be resolved and invading forces removed from those territories. But if not Iraq or Afghanistan there will be other opportunities waiting, no doubt.

Thirty or so years ago an aged neighbour recounted stories of his involvement in the first world war in France as an underage volunteer. Stories of life, death and the mass maiming of the youth of both sides. He, too, wanted to make a difference when he answered the call and he considered himself one of the lucky ones to return home alive and in one piece. During WW2 his service was in the home guard where they paraded wielding sticks and broom handles with which they vowed to defend the Homeland. In his eighties he was under no illusions as to the lies, half-truths and overstated reasons of the propaganda fed to the nation with the aim of garnering overwhelming support for the plans for wars which would result in the death of millions of soldiers and civilians alike over a huge part of the world. Plans for war which would further the interests of the privileged, which aimed to hang on to and strengthen the Empire's stranglehold on trade routes, colonies and easy access to cheap resources. Plans which would forfeit the lives of 'ordinary' men to achieve the material goals of a few.

Injuries in war are multifarious; missing limbs, damaged organs, psychological malfunction. Sophisticated weaponry has added other outcomes to combatants' injuries in contemporary conflict zones; post-traumatic stress disorder which brings a hugely increased chance of suicide, Gulf-War syndrome, exposure to dangerous levels of radiation causing birth defects in offspring sired post-conflict. Prosthetics may fit better now and be more comfortable and cosmetically acceptable than they were almost a century ago but an artificial arm/hand/leg is no substitute for your own. A husband/father/son incapacitated or wheelchair-bound for the rest of his life was not part of the family planning and death is death; there's no way to put a positive spin on that.

‘Ordinary’ citizens in ordinary situations don't have enemies. We may know people who hold opinions we don't share, we may meet people whom we don't want as friends but personal enemies are rare. Most people have no desire to deliberately kill another human being. Personal disagreements rarely conclude so drastically. Our most dangerous enemies the world over are the insidious, manufactured histories refashioned and spun in favour of the storyteller to keep us onside and supportive of damaging, acquisitive foreign policies and unpopular domestic ones. Part-truths, withheld information and downright lies as opposed to the truth, the whole truth and nothing but the truth is the norm and has caused many to become cynical of governments and opinion-makers whilst also becoming distanced from the realities of their own world, side-lined by fake democracies which offer participation in elections two or three times in a decade followed by immediate withdrawal of any chance of actual involvement in real decision making. They are left clinging to the hope of something better coming along with no real conviction that it will.

The old soldier hopes for the end of all wars as promised in “the war to end all wars” and the would-be recruit hopes he can be one of the ones to finally put the world to rights. The one's hopes dashed to his certain knowledge in his lifetime; the other's also doomed, as actual history shows again and again. The experiences of an old man in a long ago war are not that different from those the young are experiencing right now. The technology moves on but the physical and emotional effects on the human beings remain terrifyingly similar. Hindsight is a wonderful thing but, like experience, it seems that humankind is reluctant to utilise, move forward and build on a previous generation's hindsight and experience. Somehow the dialogue has to be widened, to be more inclusive, immediate and truthful, to go beyond hope to a vision of a future reality for young and old alike. A vision of a world without conflict that can be achieved by the world's citizens in general agreement that they are no longer prepared to pay the price that has been demanded of them for so long.
Janet Surman
Posted by Imposs1904 at 3:20 PM 1 comment: