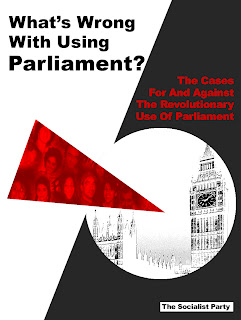 Via the SPGB's MeetUp Page:

with an introduction by Stair.

"Stair has had a long interest and involvement with what he may have described at one time as "anti-authoritarian politics".

Housmans was one of the destinations he had on his agenda pre-internet on numerous trips to London when further exploring these ideas.

His employment meant he did his "time" in the "retail and service sector" and will talk about his experience of the attitudes and positions of his fellow workers and how some of these observations tie into the question of "how we get from here to there", a classless, wageless, moneyless, stateless society.

This pamphlet comes at a time when many people are questioning the destructive effects of capitalism and also with it a rejection of leaders and the traditional left. This is something that can be encouraged. The aim of the pamphlet is to show that there is another view of social change that may be a "blind spot" with those who get involved with "anti-capitalist", "activist" or/and "anarchist" politics".

CBS News reports that although the basic pay for members of Congress is $174,000, nearly half — 261, to be exact — are millionaires (there are 535 total members of the House and Senate). Just 1 percent of Americans overall can say the same. 55 members had an average calculated wealth of $10 million or more in 2009.

While the economy has generally faltered over the past two years, congressional members actually saw their collective personal wealth increase by more than 16 percent between 2008 and 2009.
The wealthiest member of Congress is Rep. Darrell Issa (R-Calif.), whose holdings exceed $303.5 million. Rep Jane Harman (D-Calif.) is close behind with $293.4 million, and Sen. John Kerry (D-Mass.) rounds out the top three at $238.8 million. In the House, five Democrats and five Republicans make up the 10 wealthiest members, while in the Senate, six Democrats and four Republicans make up the top 10.