Guess who’s not getting that rose garden???

From the World Socialist Party of the United States website

You would have to search long and hard to find someone who was better at sticking it to the working class than The Economist. It has perfected one of the most truly remarkable posturing acts in the annals of propaganda. When times are good, its contempt for working-class aspirations borders on the domineering, despite the fact that the working class not only runs capitalism from top to bottom but also compliantly does its bit to legitimate the system during elections.

When times are bad, however, The Economist sings a different tune. It trades its contempt in for what might be called “regrettable realism,” a syrupy pietism that sighs for the misfortunes of the poor working class while giving no quarter in the chronic warfare that goes on between labor and capital:

[America’s] flexible labour market has shed 4.4m[illion] jobs since the downturn began in December 2007, including more than 600,000 in each of the past three months … An American who loses his job today has less of a chance of finding another one than at any time since records began half a century ago. That is especially worrying when the finances of many households have come to depend on two full incomes … In the emerging world … the World Bank expects some 53m people to fall below the level of extreme poverty this year. (The Economist, “The Jobs Crisis,” March 14-20, 2009)

Asserting that “unemployment rates in many European countries are below America’s … because their more rigid labour markets adjust more slowly to falling demand,” the writer goes on to concede that capital’s taking such a large share of the profits for so many years has ultimately provoked a swing of the pendulum back in the direction of energetic intervention. Apparently this was not a question of “flexible” capital markets.

The dismal solution to the “jobs crisis”? Give the capitalist class greater freedom to hire and fire — flexible labor markets. Playing god was never so much fun:

That will mean abolishing job-subsidy programmes, taking away protected workers’ privileges and making it easier for businesses to restructure by laying people off. Countries such as Japan, with two-tier workforces in which an army of temporary workers with few protections toil alongside mollycoddled folk with many, will need to narrow that disparity by making the latter easier to fire.

Well, they never promised us a rose garden … or (ahem) did they? No matter. It’s all about destroying jobs, the more easily to create new ones, you see. When you think that anyone from this rat’s nest of élitists might have been in our shoes but for an accident of birth (or fluke of the marketplace), you begin to realize how deeply ingrained is their sense of innate superiority. It just goes with the turf. Anyone who gets up there simply goes mad with power.

The writer signs off with the robot equivalent of a salt tear:

However well governments design their policies, unemployment is going to rise sharply, for some time. At best it will blight millions of lives for years.The politicians’ task is to make sure the misery is not measured in decades.

Not with a bang but a whimper
What are we to make of this Depression-proof recession, then? After the Century of Liberalism promised us the world in return for our free time, our compliance and our votes (liberté, fraternité, égalité), the Corporate Millennium rises up to remind us that capital is not after all bound by its own promises. It can take away what it gives us, with no questions asked (or, in all too many cases, not even allowed). It will continue to undermine the best intentions of reformers, who, although they can ride the profit-tiger, can never tame it. The Great Captains will deliberate in their Central Committee; perhaps they will, like Leonid Brezhnev, thank us for the Big Harvest. But keep your hands off their stash! For they are no longer in such a generous mood.

In the context of the century to come, with its threat of unprecedented natural disasters (which capital is by its very nature reluctant to pay for), this is much worse than cold comfort. It is an implied death warrant for the unlucky suckers who just happen to be in the wrong place when a panicky mob of profit-makers goes berserk. For in a global economy under continuous assault from Mother Nature and her gang of elemental forces, those who drop into the shadows will be at high risk of also dropping out of sight.

Capital has no pity for its human progenitors. It has gotten us to cut ourselves off from our own source of real abundance and creature-feeling, the human community, and when in due course it has had its falling out with us, it will shoot humanity in the back as soon as look at it. The virtues of being down on bended knee no longer seem obvious. Getting back to the Garden never looked so good. 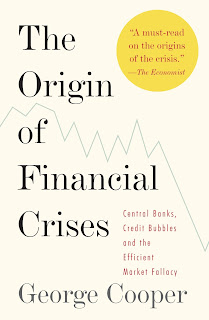 Book Review from the March 2009 issue of the Socialist Standard

Even though this book isn’t written by a Marxist but by someone taking much of his inspiration from Keynes, it is for the most part well worth reading as an explanation of asset price bubbles. It is also, at root, a good attack on ‘efficient markets hypothesis’ – the view that prices accurately reflect all known information at any one point in time and that markets are efficient allocators of resources.

While he uses language more loosely sometimes than he might, talking freely about ‘credit creation’ when it is clear that what he means by this is the constant recycling of deposits into loans by the banking system rather than the creation of credit out of thin air, his explanation of asset price bubbles is sound. Essentially he takes the view that the process of the circulation of capital in the market economy is aided by the extension of credit and that this inherently gives rise to the possibility of financial dislocation and crisis (as did Marx, even if Marx argued that this possibility only became a reality when a crisis of overproduction for particular markets took place in the real economy).

Though it is something of a generalisation, Cooper contends that the tendency of markets for commodities to respond to rising prices through falling demand is not matched by the behaviour of markets for financial assets, which have a tendency to generate increased demand when prices rise (being typically intended for investment not consumption). This process can act in reverse, because when prices for commodities fall demand then generally increases, but when asset prices fall, demand for them falls too, as in the current financial crisis.

This is partly because much of the credit extended to purchase the assets has been granted by the banks against underlying collateral that is losing its nominal value. In this sense, there is no supposedly efficient pricing mechanism to reallocate resources – merely self-feeding panic as falling asset prices lead to enforced asset sales, and then further price declines caused by this lead to yet more asset sales as a consequence: ‘the process of collateralised lending generates one of the key destabilising forces in financial markets. Borrowers whose assets have already fallen in value may not have additional collateral to hand, and the bank’s decision to sell their collateral, into what is by definition a falling market, may simply exacerbate the borrowers’ and the bank’s losses.’ (p.100). This is essentially what has been happening during the credit crunch.

His analysis of what he calls the ‘inflation monster’ also largely hits the mark. While he does not overtly use a labour theory of value, he traces the origins of money through the establishment of gold as a recognised standard and store of value, and then considers the development of gold depository certificates and paper money as a consequence of this. He argues that with the expansion and contraction of money and credit during trade cycles, prices rise in booms and then fall in slumps but there can be no permanent tendency towards inflation while money is convertible into gold.

When convertibility into gold is suspended then the inflation monster can (and has been) unleashed by governments and central bankers: ‘The new currency regime, without a gold exchange rate, is known as fiat money. The movement from a currency backed by gold to one with no fixed gold price represented a momentous shift in our financial architecture . . . Governments had now awarded themselves the right to create their own money without any corresponding liability; since there was no longer a promise to convert the printed money into gold, there was no longer a liability associated with printing that money’ (p.69). In other words, governments could inject excess purchasing power into the system, in the form of an over-issue of inconvertible paper currency, that would only serve to push up prices.

Cooper identifies the collapse of the Bretton Woods international trading system in 1971 when the dollar was no longer pegged to gold as the definitive moment here, though in truth full convertibility had been suspended long before this in the US and all other advanced economies (in Britain it was as early as 1931 and by the time of the collapse of Bretton Woods in 1971 only around 1 per cent of the currency issue in the UK had even a nominal gold backing).

He argues that an excess issue of inconvertible paper currency can be directly used to finance government expenditure, as he thinks is about to happen now. He also makes the point – as have we – that there is a sense that governments prefer rising prices to falling prices partly on the grounds that it can increase their net tax-take, and perhaps because industrial unrest is more likely when workers have to resist falling wages than when they have what are generally rising nominal (if not real) wages under inflationary conditions. This partly presupposes that governments recognise a causal link between an excess note issue and rising prices, which is a moot point – though he also includes an interesting quote from Ben Bernanke, before he became chairman of the US Federal Reserve, which illustrates that there is certainly recognition of a linkage of sorts (even if they might view it as just one cause of inflation alongside others).

The tentative recommendations that Cooper makes later in the book for dealing with capitalism’s financial crises need not detain us too long, though it is interesting to note that the inability of mainstream economics to adequately account for the current crisis is again leading others towards the type of analysis that has all too rarely been seen, in recent decades, outside the pages of the Socialist Standard.
DAP
Posted by Imposs1904 at 4:50 AM No comments: