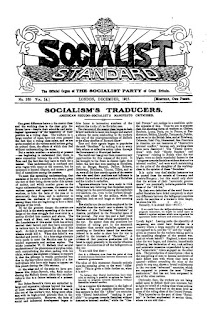 From the December 1917 issue of the Socialist Standard

There ie no object for which the capitalist class might enlist or conscript the Socialist that could, by any conceivable argument, be considered by him to coincide with his interests. The sole aim and object of the Socialist is the establishment of Socialism. It matters little to him, as regards the direction of his revolutionary energy, that he may not live to see its fulfilment: his interest is bound up with his class, and the necessity imposed on that class to prepare itself for the organised and conscious effort that will carry it through the convulsions of social revolution to a complete transformation of Society.

The emancipation of the working class can only mean extinction for the capitalist class. The latter must be deprived of ownership in the means of wealth production. This is the conscious aim of the Socialist, because only by that means can the power of the ruling class be broken. The Socialist objective is to strip the capitalist class of the power they wield to-day— to take from that class that which gives them the power to exploit, and makes of them a separate and ruling class.

Stripped of political power and ownership in the means of wealth production, capitalists and capitalism cease to be, and the working class, having rendered them powerless by capturing the machinery of government, are at once free to organise production and distribution on the basis of common ownership and democratic control.

The Socialist is committed to the task of ending capitalist industry. He is convinced by facts, figures, and experience that the capitalist class are parasitic, are useless, pernicious, corrupt, brutal and hypocritical; he is convinced that their affluence is the result of robbery, and that the poverty of his class is due to this robbery.

In the light of this knowledge the Socialist confronts the ruling class as the implacable enemies of his class. There can he no affinity of interests, no compromise, no object in common that can unite him with that class. He is pledged in complete antagonism. Convinced by irrefutable evidence of the truth of his position, he stands shoulder to shoulder with his comrades in the red army, determined to wage the class war to the utter extinction of capitalism.

His slavery is real, ever-present, all-engrossing. Beside it monarchies, markets, nationality and empires are as dust in the balance. He can only wipe out the degradation of it by waging incessant and relentless war on the class that enslave him. And that class, fully conscious of his antagonism, knowing his object, alive to its meaning and significance, must know that the Socialist would not voluntarily give one moment of his time nor one ounce of bis energy, to the fulfilment of any object espoused by them.

To call the Socialist a slacker is therefore absurd and peevish. In pre-war days the capitalist and bis agents failed to conceal their chagrin and annoyance at the steady advance of Socialism. To-day they endeavour to bridle their mortification at the opposition they meet with. For the moment the Socialist is the lesser enemy, and his antagonism is submerged by the hubbub of patriotism raised by labour leaders and self-styled Socialists, who have only adopted the name that they might serve capitalist interests more effectively.

Every capitalist newspaper contains columns of support from prominent Socialists, so-called. Fraternisation—by order of the capitalist—is to be the policy of the Socialist. The capitalist would have the class war suspended while his business war remains undecided. More, he would even conscript the conscious and stalwart enemies of his class and drag them from the noble and glorious fight they are waging, and sacrifice them like pawns on the military chessboard glad to be rid of them, even if their going helped him not at all towards a decisive victory and a firmer grip on the markets of the world.

But it is only the dupes of the false Socialists that are soared by the fraternisation cry. The Socialist, who understood Socialism and meant Socialism, even before the war—years before—declared emphatically that no conceivable circumstances could possibly justify the suspension of the class war. The irreparable injury inflicted upon tho working class by the master class placed all thought of armistice or compromise out of the question. While the robbery of the working class proceeds, while they are enslaved and impoverished, it is the duty—a duty he owes to himself, to his class, and to posterity—of every Socialist to expose every capitalist bait that may tempt the workers, to lay bare the hollowness of all their protestations, the futility of all their reforms, and the baseness and greed that stimulates all their actions. It is the duty of the Socialist to dissect and lay bare before a politically ignorant working class, the capitalist process of exploitation. The working class can only emancipate themselves when educated and organised. Can those who join in the performance of such a task be termed idlers or slackers? The colossal nature of the task answers the question. There is no slackness about the Socialist; others may be drifted and drafted, through sheer apathy, spinelessness, and ignorance, into capitalist enterprises, but he is occupied to the full. The class war is the only war that matters to him, and all the energy left to him after his periods of exploitation, is absorbed in its prosecution.

It is more ridiculous and absurd for the. British capitalist to call the Socialist a slacker than it would be for him to rail at the German capitalist for not assisting in his own defeat. Their present enmity will pass. Their pre-war understanding and international solidarity against the workers of the world will be re-established—some day; but the class war is a war that must be fought to a finish, a war that will increase in bitterness as economic conditions intensify and the ruling class, actuated by the desire to maintain their supremacy, descend to even more infamous and brutal methods of suppression than they employ to-day.

But whatever the tactics or policy of the ruling class, the Socialist will neither be deceived nor intimidated. When they appoint their bourgeois friends and agents — men like Kerensky, Thomas, and Lloyd George—to act as leaders and make pronouncements for the Socialists, they will be stripped of their disguise and exposed as frauds. When all such methods fail to deceive the workers and armed force alone keeps them in subjection, the Socialist will fearlessly reiterate his advice to capture the machinery of government and use the armed forces against the enemies of Socialism.

Those who believe in the righteousness of the allied cause but fail to take their share of the work and danger, slinking into the munition factory or skulking behind jobs of so-called national importance while shouting their loudest for a military triumph to be accomplished by others—those are the slackers. Those who plead before tribunals on any but Socialist grounds, although they plead in accordance with capitalist laws are not only slackers, but humbugs. Christian. Quaker, and humanitarian can all justify their objection to fighting by extracts from their book of superstitions. But the fighting parson can also justify his bloodthirsty attitude from the same source—such is the accommodating character of the Christian religion and the farcical nature of the conscientious objection.

Capitalist politicians, in the past, have said that the working class, unrestrained by capitalist authority, were powerless for anything but destruction and anarchy. But even while it was being said capitalism was drifting helplessly toward the present maelstrom of slaughter and devastation. With full power and authority over the wealth producers, the capitalist class cannot safeguard them against poverty and starvation, although the wealth actually produced by the workers would suffice for a population three times as large. Capitalism failed to protect the workers in peace-time from poverty and anarchy. It has even failed to keep the peace. Its failure is complete a failure for all men to see. Yet still the ruling class pretend to hope—for what ? A solution of the poverty "problem”? No, for that would end their supremacy. They hope that the working class, the bulk of society, will continue to leave them in possession of all the means of wealth production ; that idleness and luxury may still be theirs ; that the right to exploit shall still belong to them, even though their rule is responsible for a continuous glut of wealth side by side with universal poverty, periodically culminating in a welter of blood and an orgy of destruction.

To support such a system is a crime against the working class. To work steadfastly for its abolition is meritorious and sensible. The Socialist, therefore, takes no side in capitalist quarrels, but works consistently for the overthrow of capitalism. He does not believe in the righteousness of any of the belligerents, because the capitalist class of each nation lives by the robbery of his class. His object is to end the chaos and ruin that afflicts society. Let those who bolster up or tolerate such a system compare their actions with his and then ask themselves who are the criminals and slackers of modern society.
F. Foan