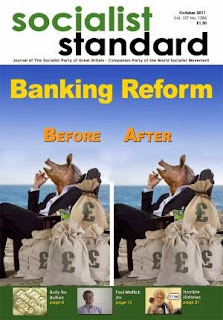 From the October 2011 issue of the Socialist Standard

Last month the Independent Commission on Banking, chaired by Sir John Vickers, published its final report. As expected, it recommended that banks should separate their ordinary High Street activities from their more risky (and more profitable) investment banking (their dealings in derivatives, securitised loans, etc). The aim is to avoid a future bail-out of the whole of a bank in the event of another banking crisis like that of 2007-8. If this happened again a bank’s investment arm would be allowed to sink or swim while the proposed requirement for extra capital reserves for the High Street arm should be enough to allow it to weather the storm.

The banks are up in arms and have been lobbying strongly against any such reform because it will hit profits for their shareholders, first, by tying up more of their capital and accumulated profits in reserves and second, by constraining their investment banking activities, since without the prospect of an eventual government bail-out they will become more risky and so more costly to fund. It remains to be seen how successful this lobbying will be, but the government has said it will accept the Commission’s recommendations and implement them sooner or later, if later rather than sooner.

Should we as workers care either way? In a word, no. This is an internal problem for the capitalist class, a fight between two of its factions. The non-banking faction is annoyed at having to pay for what it regards as the irresponsible activity of the banks which contributed to making the 2007-8 crisis worse than it would otherwise have been. They don’t want to be put in this position again and have been exploiting people’s dislike of banks to gain their support for moves towards more bank regulation.

People don’t like banks because they perceive them as parasitic on real activity. Indeed they are, but they are still essential to capitalism. Whereas, the role of industry is to profit by investing money in production, the role of banks is to lend industry that money and, in return, receive a share of its profit in the form of interest. Since profit is derived from the unpaid labour of those who work, banks are parasites on parasites.

But don’t banks lend to individual workers as well as to businesses? Yes, they lend workers money to buy a house or a car or some other big expenditure which couldn’t be paid out of monthly wages or salaries. Banks naturally charge interest on these loans but calculate that in time they will get both the interest and the loan back out of the future wages of the borrower. So, to this extent, worker-borrowers are affected by the level of interest rates.

Does this mean that low interest rates could be said to be in the interests of the working class? It’s not as simple as that because other workers are savers and prefer high interest rates. Some populist demagogues (such as reform-dangling Trotskyists) propose low interest rates for borrowers and high interest rates for savers. At the time of the Northern Rock crisis Militant said that they had “always demanded nationalisation, but on the basis of safeguarding all jobs as well as giving favourable deals to ordinary depositors and mortgage holders” (The Socialist, 19 February 2008.) But it’s not possible to pay depositors a higher interest rate than that offered to borrowers, as banks (and building societies) get their principal income from the difference between the rate they pay depositors and the rate they charge borrowers.

In any event, this is an academic issue since interest rates are not fixed to benefit workers and there is nothing workers can do to influence them.

How banks work
The Report does provide an insight into how banks work. There’s no nonsense here about banks being able to make loans out of thin air by a mere keyboard stroke. Banks are recognised as “financial intermediaries” whose role is to “bring together savers and borrowers”. Banks of course do other things as well (such as deal in derivatives and securities, and underwrite share issues). The Report proposes to “ring-fence” a bank’s “core economic function of intermediating between depositors and loans” from these other activities. It proposes that only what it calls “ring-fenced banks” (which will include building societies) should be able to take deposits from and provide overdrafts to individuals and small and medium-sized businesses (fewer than 250 employees). If they choose, they will also be able to accept deposits from bigger but non-financial businesses and make loans to them. Non-ring-fenced banks will not be able to take deposits from or make loans to individuals or small businesses, but they will be able to do everything else they have been doing until now.

The clear assumption throughout the Report is that a bank’s loans are financed out of its deposits. Ring-fenced banks will, however, be able to borrow money from the money market in a limited way to cover a short-term need to make payments. Here, the Report makes a reference to the famous (or notorious) cash reserve which banks have to keep to deal with withdrawals, and which forms the basis of so-called “fractional reserve banking”. The reserve is not very high now (about 2-3 percent) and doesn’t all have to be kept in cash; part may be held as very liquid assets (i.e. assets that can be converted more or less instantly into cash). “Within a bank”, says the Report, “the treasury function maintains an appropriately sized pool of liquid assets so that it can be confident of meeting its obligations to pay out depositors and other creditors”. The rest of what is deposited with the bank it can lend out (if it can find enough suitable borrowers).

This aspect of banking (which applies equally to building societies, credit unions and savings clubs) has given rise to all sorts of misunderstandings and confusions. Some even believe it to mean that when a bank receives a cash deposit it can immediately make a loan of many times the amount. As stated, the Report doesn’t give any credence to this sort of nonsense. It simply takes it for granted that banks make loans out of deposits.

The Report does propose a new capital ratio requirement. This is the ratio of a bank’s own capital to its assets (loans) and is not the same as the cash reserve requirement. The Report suggests that this should be “at least 10 percent of risk-weighted assets”. This would not normally restrict the amount a bank can lend, nor is it intended to. The money to build up its capital to the required level would not come from depositors but from the bank’s profits or from a share issue. Similarly, a ratio in excess of 10 percent would not mean that the bank would lend more. The Report sees this as increasing a bank’s “loss-absorbing capacity, and is trying to ensure that banks have enough capital and accumulated profit to sustain a potential big loss.

The Report does not go the whole hog and propose a complete separation of “ring-fenced banks,” as was done in America from the 1930s till 1991. Lloyds, HSBC, Barclays, etc can continue to exist as universal banks, but they will have to take legal steps to “ring-fence” their lending and deposit-taking to and from individuals and small businesses, and so separate them from their investment activities. No doubt the banks are already thinking up ways to get round this and, when the present crisis is history, to launch a campaign for de-regulation.

One thing that the banking reform will not do is to stop another economic and financial crisis, as some politicians are suggesting. We hold no brief for the banks but they did not cause the present slump. This was caused by capitalism’s tendency to overproduce for particular markets in a boom, not by monetary policy or institutional arrangements, even if they were an exacerbating factor. So, no banking reform is not going to eliminate the boom/slump cycle that is built-in to capitalism.
Adam Buick
Posted by Imposs1904 at 10:21 AM No comments: 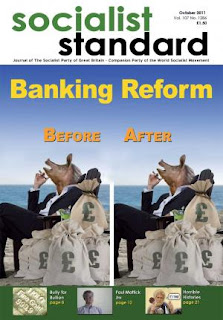 And it is in this sense that, for now at any rate, the Nato intervention seems to be going so well. For a relatively low cost, and with relatively few Western casualties, Britain, France and America looks like it has got rid of a tyrant they had struggled to control for decades, staged a brilliant PR exercise supporting a democratic revolution in the Middle East, and are about to help install a regime friendly to its vital strategic oil interests in a country with the largest oil reserves in Africa. Job done indeed.
Posted by Imposs1904 at 1:12 AM No comments: