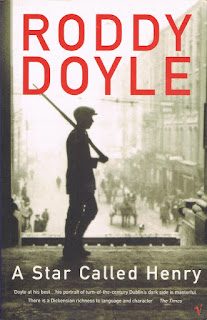 
All the blurbs rated it; a sobering introduction: 'Exhilarating', 'Masterpiece', 'a breathtaking act of apostasy'. With such credentials from eminent sources, this reviewer approached this book with some trepidation.

The novel's principal character, Henry Smart, is born into the torturous misery of Dublin's slumdom in 1902. Doyle paints a tangible word picture of the sheer awfulness of life for the poor in Ireland's capital city as it emerges into twentieth century capitalism. It is a well-delineated background for the characters and events which are the basis of Doyle's plot.

However his treatment of those characters and events strain credulity. Henry's Da, from whom he inherited his name - and presumably his skill as an escapologist - is a contract killer, a mass murderer who's favoured weapon is his wooden leg. The younger Henry, at fourteen years old is in the General Post Office (GPO) lighting the insurrectionary touch-paper that will blossom into a guerrilla war against British rule. The sex angle is provided by Henry taking time out to shag a rebel girl - and future mass killer - in the basement.

Doyle, accurately if somewhat enigmatically, makes the discovery that socialists made at that time: that the victory of Irish nationalism bequeathed to the working class only a change in the hand that held the whip. The pangs of hunger, the ignominy of poverty, could now be legitimately expressed in the Irish language. But if a book or play identified the source of Ireland's miseries - in Irish or English - or exposed the malignant Catholic agencies designated to 'educate' Ireland's children, what passed for democracy in the new Ireland promptly had it banned.

Doyle, in the person of Henry Smart, has pretend conversations in the GPO during the Easter Week Rising with the erstwhile socialist James Connolly, promoted from head of his union's self-defence force, the Irish Citizen Army (ICA), to Commandant-General Connolly of the Dublin Division of the Irish Republican Army. Connolly stands pure in Doyle's prose. The future Irish dramatist, Sean O'Casey, who as a one-time secretary to the ICA was closer to Connolly, took a contrary view: he saw Connolly as renouncing the cause of the international proletariat for what was effectively the armed wing of an aspiring native capitalism.

For those who enjoy the raucous writing of Roddy Doyle there will be enjoyment in this book but, unlike novels like Plunkett's Strumpet City, it will not bring that much enlightenment.
Richard Montague