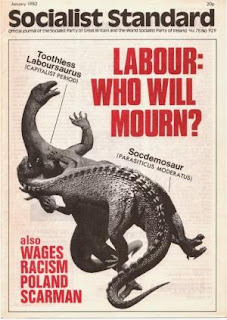 When capitalism is going through a period of expansion most industries are able to sell all their output at a profit. With unemployment at a low level it is a favourable time for unions to press wage claims. Employers, rather than have the flow of profits interrupted, will make concessions, often without strikes actually taking place. In this phase the workers’ standard of living rises. In a serious depression the position is reversed. The threat by the unions to close the factories loses most of its force because, with sales falling and profits harder to make and often disappearing altogether, employers are cutting production, standing workers off, closing factories down, and in extreme cases going out of business. The big increase of unemployment helps the employers to resist claims for wage increases. In this phase it is normal for the standard of living of workers to fall, quite apart from what happens to the unemployed.


As far as workers in work are concerned, what is going on in a depression is obscured because, at least for a time, wages and salaries continue to rise more than the rise of prices. In the year for May 1980 to May 1981 the average earnings of all workers rose by 13 per cent while prices rose by only 11% per cent. But employers are interested not only in rates of wages but equally in the amount of work they can get out of each worker. There has been a general intensification so that the same output can be got with fewer workers. A survey early in the year showed that this has happened to a marked extent in offices, and the same has gone on in industry generally, often with the introduction of pay related to productivity, as in the coal mines. It is shown too in the reduction of staff by 9,000 in British Airways and in the cuts of Civil Service and local government staffs. And with the deepening of the depression the wage trend is now changing. In the period January to July 1981, while prices rose by 10.8 percent average earnings of all workers rose by only 7.3 per cent.

Of course the unions try to resist this and declare that they will not accept it; just as they have gone on declaring in the past ten years that the level of unemployment, which has doubled and doubled again, was “unacceptable” to them. They are wise to do their best but they cannot escape the consequences of capitalism, any more than can the capitalists.


Different groups of workers come up against the impact of depression in different ways; ranging from private industry where falling profits hit them at once and directly, to nationalised industries in which government subsidies may lessen the impact for a time, to the Civil Service and local government, where government pay policy is the decisive factor.

In manufacturing industry, with many bankruptcies and other companies on the verge, average earnings of all workers and the average earnings of engineering workers have both been falling behind the rise of prices since 1978. Seventeen cases have been reported of companies in which unions have had to agree to pay freezes for varying periods of up to a year (Daily Mail, 21 September 1981). Among these are the British Steel Corporation, British Airways and British Caledonian. In the engineering industry, against a claim by the union for an increase of at least fourteen per cent on the national rate, the employers at first proposed no increase at all, but later offered three per cent which the unions rejected. The unions faced the difficulty that 400.000 jobs have been lost in the year to June 1981 and there are 300,000 workers on short time. In this industry wages are negotiated locally, apart from the national rate, and the employers’ offer leaves the field open for bigger increases in companies still trading profitably.

For the nationalised industries as a whole the government has announced that its 4 per cent guide line is expected to be applied. British Leyland accordingly made an offer of 3.8 per cent and the unions were told it was not negotiable. The company’s reaction was: “We are obviously not in a robust enough situation to withstand any widespread or protracted industrial action. We would not survive. There would be a widespread loss of jobs if they were successful in getting a lot of people out on strike” (The Times, 3/10/81).

Unlike BL, the nationalised coal mines are not losing money, and in the changed energy situation, there is a government approved plan for expanding output in the long term. New mines are due to come into operation. Not wanting a coal strike, the Board offered nine per cent, and then increased it but a strike is still possible.

It is in the Civil Service and local government that the 4 per cent is chiefly intended to operate. In this field the government, directly or indirectly, controls the amount of money it is prepared to spend on wages and government strategy has already been made clear in the determined fight to defeat the 21 weeks of strikes by civil servants. Like Reagan’s ruthless handling of the strike of government-employed Air Traffic Controllers, it aims to set a pattern for wage increases generally. Since 1956 Civil Service pay has, by agreement, been related to movements of pay for comparable work in outside industry. But long before 1956, in a less formal way, governments sought to prevent the pay of its employees getting out of line. A situation similar to the present one arose in 1931. Then, too, in a depression, the government drastically cut expenditure on its departments. Civil Service pay, which from 1920 to 1931 had been reduced periodically in line with the fall of prices, was subjected to a further 10 per cent cut. Unemployment pay was also cut.

Governments enter into agreements with Civil Service unions, but, like employers generally, when it suits them they will suspend, modify, or break agreements, including those permitting claims to be taken to arbitration.

The present government has already prepared the way for this in Civil Service pay this year. The unions are to be allowed to go to arbitration, but the agreement on which the unions recently settled their dispute, contains a significant reservation: The Government will accept recourse to the Civil Service Arbitration Tribunal but on the understanding that the Government reserves the right, if necessary, to ask the Mouse of Commons to approve setting aside the Tribunal’s award on grounds of over-riding national policy.

The declared attitude of the unions concerned threatened a “winter of discontent” comparable with what happened in the winter of 1978-9 when the Labour Government tried to impose a 5 per cent ceiling on wage increases and provoked widespread strike action. On past form we may expect the Thatcher government to be more determined in its resistance.
Edgar Hardcastle
Posted by Imposs1904 at 3:26 PM No comments: