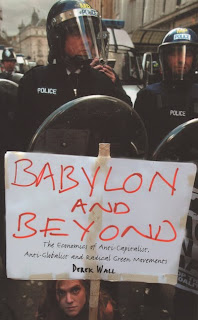 Book Review from the December 2005 issue of the Socialist Standard


Babylon and Beyond: the Economics of Anti-Capitalist, Anti-Globalist and Radical Green Movements. by Derek Wall Pluto Press

This is a textbook-like survey of various trends in the anti-globalisation movement. As such, it covers a great deal of material in less than 200 pages, from avowed supporters of capitalism such as Joseph Stiglitz to autonomists like Toni Negri, via Naomi Klein and (but why?) Major Douglas and social credit. There are too many direct quotations, and too many typos (e.g. references to Lenin on imperialism as 'the highest state of capitalism'). But not many readers will be familiar with all the writers and activists mentioned here, so the book does serve a useful purpose, though it is scarcely a full guide to the ideas of particular thinkers.

On the whole Wall summarises other views rather than expressing opinions of his own, but he does sometimes let his own attitudes show through. For instance, he is sceptical about the ideas of some 'green localists' that a decentralised economy would naturally lead to ecological sustainability and social justice.

The chapter on 'Marxisms' (note the plural) starts well, with a photo of the Socialist Party's founding conference, but ends weakly with references to Russia, Cuba, etc., as if these dictatorships constituted a valid reason for rejecting Marx's ideas. He discerns a 'pro-globalisation strand of Marx's thought', which is correct to the extent that Marx saw capitalism as expanding into more and more parts of the world, but it is simplistic to transfer what he wrote in this regard 150 years ago to the present day.

Capitalism has long been a world system and created the potential for abundance, so there is no need for further globalisation and the concomitant wars and impoverishment.

As a Green Party member, Wall himself seems to support what he calls 'ecosocialism'. Certainly we can accept that Socialism needs to include ecological concerns, indeed that this will be a crucial aspect of a society based on common ownership. We can also agree with his description of the ideas of Joel Kovel: "The use of what is useful and beautiful must be pursued, while exchange values must be rejected. . . . The rejection of exchange values is essential to reducing resource consumption and human alienation."

Unfortunately Wall stops short of advocating the abolition of the wages system, and it's just not clear what sort of society he does stand for. There are some remarks about "moving beyond the market" and "extending the commons", and some praise for the open source software movement, where software is put on the web for free (Wall suggests that Marx would have used the open source browser Firefox!). This is OK as far as it goes, but it needs to be taken that crucial bit further.
Paul Bennett
Posted by Imposs1904 at 10:45 AM No comments:

The charity World Vision is running an appeal for funds that it calls Child Health Now.

It recently took a full page advertisement in The London Times (16 November) that illustrated the plight of the world's poorest children. It reported that twins in Zambia had severe diarrhea but that the clinic they attended had only enough drugs to treat one of them. The untreated one consequently died and joined the estimated two million children that die every year of this untreated condition.

The advertisement then went on to point out "A simple mixture of salt, sugar and water that costs just a few pence can save a child's life, without requiring hospital treatment." The death of a child for the lack of something costing a few pence is shocking enough but the charity then claimed "Today, World Vision launches its Child Health Now campaign, calling for an end to preventable child deaths. ...If the UK government, and the international community, channeled more aid into simple community provisions, like vitamins and rehydration salts for children cut off from health systems, the lives of six million children a year could be saved."

What the well intentioned World Vision do not understand is that we live inside a capitalist society where the priority is making profit not saving children. As we reported in the July 2009 issue of the Socialist Standard "Military spending worldwide rose by 4 per cent to $1.46 trillion."

Immense expenditure to protect markets, sources of raw materials and profits, yet millions of kids die for the lack of a few pence.